Renowned pianist, conductor and teacher Leon Fleisher, now in his sixth decade before the public, started piano lessons in his native San Francisco at age four, and gave his first recital at eight. A year later he began studying with the great German pianist Artur Schnabel, and by 16, in 1944, made his debut with the New York Philharmonic. He was the first American to win the prestigious Queen Elisabeth of Belgium competition, in 1952. Fleisher's career was on a smooth upward trajectory for the next dozen years: he concertized all over the world with every major orchestra and conductor, gave recitals everywhere, and made numerous touchstone recordings with George Szell and the Cleveland Orchestra of the piano concertos of Beethoven, Brahms, as well as pieces by Grieg, Schumann, and Rachmaninov
(all available on CD and digitally).

Fleisher was suddenly struck silent when two fingers of his right hand became immobile in 1965. Undergoing many treatments that gave only temporary relief, he was forced to "retire" when only 37 years old. This was the defining moment in his career until recently, when new forms of treatment and therapy finally helped relieve the neurological affliction known as focal dystonia that had been plaguing him for more than half his life and he has been able to resume playing with both hands.

Overcoming decades of seemingly insurmountable challenges, the extraordinary renaissance of Fleisher's career has been documented in his first two-hand recordings in some forty years, the critically acclaimed Two Hands [Vanguard Classics]. Russell Platt in The New Yorker listed it as one of 2004's Best CDs with the following remarks: "No American pianist can equal his combination of supple phrasing, intellectual mastery, and interpretive depth." Two Hands' repertoire ranges from J.S. Bach and Domenico Scarlatti via Chopin and Debussy to Franz Schubert's monumental final Piano Sonata in B flat Major. The same title was given to a biographical film by Nathaniel Kahn nominated for Best Documentary Short at the 2006 Academy Awards. In May 2007, his recording of the Brahms Piano Quintet with the Emerson Quartet [Deutsche Grammophon] was released to rave reviews, and his recital and concerto appearances in recent years have re-affirmed his place among the legendary pianists and musicians of our time.

In the nearly 40 years since Leon Fleisher's keyboard career was so suddenly curtailed, he has followed two parallel careers as conductor and teacher while learning to play the extensive but limiting repertoire of compositions for piano left-hand. Mr. Fleisher's reputation as a conductor was quickly established when he founded the Theatre Chamber Players at the Kennedy Center in 1967 and became Music Director of the Annapolis Symphony in 1970. He made his New York conducting debut at the 1970 Mostly Mozart Festival and in 1973 became Associate Conductor of the Baltimore Symphony. He has appeared as guest conductor with the Cleveland Orchestra and the Symphony Orchestras of Boston, Chicago, San Francisco, Montreal and Detroit, among others. He also had a regular association with the New Japan Philharmonic as its Principal Guest Conductor, leading the orchestra in a series of concerts each season, as well as with the Chamber Music Orchestra of Europe and the Gustav Mahler Chamber Orchestra.

Teaching has been a crucially important element in Leon Fleisher's life. As a revered pedagogue, he has held the Andrew W. Mellon Chair at the Peabody Conservatory of Music since 1959, and also serves on the faculties of the Curtis Institute of Music in Philadelphia and the Royal Conservatory of Music in Toronto. From 1986-97 he was Artistic Director of the Tanglewood Music Center. His teaching activities at the Aspen, Lucerne, Ravinia and Verbier festivals, among others, have brought him in contact with students from all over the world. He has also given master classes at the Salzburg Mozarteum, the Paris Conservatory, the Ravel Academy at St. Jean de Luz, the Reina Sofia School in Madrid, the Mishkenot in Jerusalem and the Metropolitan Museum of Art in New York.

Fleisher received the 2007 Kennedy Center Honors at the 30th annual celebration of the arts where he was recognized by Kennedy Center Chairman Stephen A. Schwarzman as "a consummate musician whose career is a testament to the life-affirming power of art." Last year's World Piano Pedagogy Conference was dedicated to Fleisher, celebrating him as one of the giants of classical music. In 2005, Fleisher was honored by the French government and was named to the rank of Commander in the French Order of Arts and Letters, the highest rank of its kind. He and his wife Katherine Jacobson-Fleisher have opened their private life by regularly playing duos together for audiences around the world. 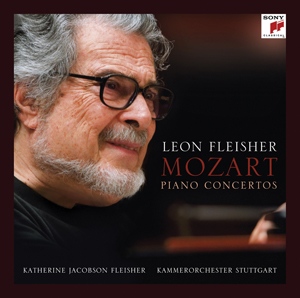 A fixture on the American music scene for more than six decades, pianist Leon Fleisher releases Mozart's Piano Concertos No. 12 in A Major, K. 414; No. 7 in F Major for two pianos, K. 242; and No. 23 in A Major, K. 488. Fleisher plays alongside the Kammerorchester Stuttgart, a distinguished ensemble that has made something of a specialty of the Viennese Classicists, and is joined by wife Katherine Jacobson-Fleisher, in Piano Concerto No. 7 for two pianos.

Praised in his early career for his poetic yet vigorous performances of works by the Viennese masters, this is Fleisher's first two-hand concerto recording in over 40 years. The pianist naturally devoted his new disc of two-hand concertos to the music of Mozart, following his miraculous recovery from a neurological impairment of his right hand.