Renowned as a musical pioneer, cellist Matt Haimovitz is praised by The New York Times as a "ferociously talented cellist who brings his megawatt sound and uncommon expressive gifts to a vast variety of styles" and by The New Yorker as "remarkable virtuoso" who "never turns in a predictable performance." He has inspired classical music lovers and countless new listeners by bringing his artistry to concert halls and clubs, outdoor festivals and intimate coffee houses – any place where passionate music can be heard. He brings a fresh ear to familiar repertoire, champions new music, and initiates groundbreaking collaborations, as well as creating innovative recording projects. Besides his relentless touring schedule, he mentors an award-winning studio of young cellists at McGill University's Schulich School of Music in Montreal.

Haimovitz made his debut in 1984, at the age of 13, as soloist with Zubin Mehta and the Israel Philharmonic. At 17 he made his first recording with the Chicago Symphony Orchestra, for Deutsche Grammophon. He has gone on to perform on the world's most esteemed stages, with such orchestras and conductors as the Berlin Philharmonic with James Levine, the New York Philharmonic with Zubin Mehta, the English Chamber Orchestra with Daniel Barenboim, the Boston Symphony Orchestra with Leonard Slatkin, and the Orchestre symphonique de Montréal with Kent Nagano. Haimovitz made his Carnegie Hall debut when he substituted for his teacher, the legendary Leonard Rose, in Schubert's String Quintet in C, alongside Isaac Stern, Shlomo Mintz, Pinchas Zukerman and Mstislav Rostropovich.

The solo cello recital is a Haimovitz trademark, both inside and outside the concert hall. In 2000, he made waves with his Bach "Listening-Room" Tour, for which, to great acclaim, Haimovitz took Bach's beloved cello suites out into the clubs across the U.S., Canada, and the U.K. Haimovitz' 50-state Anthem tour in 2003 celebrated living American composers and featured the cellist's own arrangement of Jimi Hendrix's "Star-Spangled Banner." He was the first classical artist to play at New York's infamous CBGB club, in a performance filmed by ABC News for Nightline UpClose.

Haimovitz revisited the Bach cello suites in 2015 with the release of The Cello Suites According to Anna Magdalena for the PENTATONE Oxingale series, inspired and informed by an authoritative manuscript by Anna Magdalena Bach and performed on period instruments. This was followed by the 2016 release of Overtures to Bach, six new commissions that anticipate and reflect each of the cello suites, by Philip Glass, Du Yun, Vijay Iyer, Roberto Sierra, David Sanford, and Luna Pearl Woolf. Both albums were among the credits for David Frost, for his 2016 GRAMMY® win for Best Classical Producer. Overtures to Bach is often heard in conjunction with Haimovitz's "A Moveable Feast" performances – a series of pop-up events in unconventional locations, followed by a concert performance. "A Moveable Feast" has recently been heard in Berlin, New York City, Montreal, and numerous other US cities, and will continue on to Pennsylvania, New Mexico, Virginia, and Tennessee this season.

In fall 2017 Haimovitz releases a new album, also on the PENTATONE Oxingale series, with his longtime duo partner, pianist Christopher O'Riley. TROIKA is an all-Russian program featuring sonatas by Shostakovich, Rachmaninoff, and Prokofiev, along with new arrangements of Russian-themed music from Paul McCartney to Pussy Riot. This follows the summer release of an album of solo cello music by Philip Glass on his Orange Mountain Music label, which includes the world premiere of Glass's Partita No.2. The album was launched in June at a special concert with Philip Glass at the piano. This season will also see the release of Haimovitz's live recording, with the Bruckner Orchestra and conductor Dennis Russell Davies, of the cello concerto by Isang Yun, commemorating the 100 year anniversary of the composer's birth.

Haimovitz' recording career encompasses more than 20 years of award-winning work on Deutsche Grammophon and his and composer/producer Luna Pearl Woolf's own trailblazing independent label Oxingale Records, now in collaboration with PENTATONE. Three recent Oxingale albums have been nominated for Juno Awards and a fourth, BEETHOVEN, Period, a traversal of the Beethoven Sonatas and Variations for Piano and Cello on period instruments with Christopher O'Riley was an Editor's Choice and one of the top-10 Beethoven albums of recent times, at Gramophone Magazine. Recent releases also include ORBIT, an expansive 3-SACD compilation of Haimovitz' solo cello work, and reissues of the critically-acclaimed Shuffle.Play.Listen (with Christopher O'Riley), AKOKA (with David Krakauer), and Meeting of the Spirits, which was nominated for a GRAMMY® for Best Classical Crossover Album and won a GRAMMY® for Best Producer of the Year (Classical). Haimovitz' recording of Philip Glass's Cello Concerto No. 2, "Naqoyqatsi," with the Cincinnati Symphony and Dennis Russell Davies, recorded live in Cincinnati, has received universal acclaim.

In 2006, Haimovitz received the Concert Music Award from ASCAP for his advocacy of living composers and pioneering spirit, and in 2004, the American Music Center awarded Haimovitz the Trailblazer Award, for his far-reaching contributions to American music. Born in Israel, Haimovitz has also been honored with the Avery Fisher Career Grant (1986), the Grand Prix du Disque (1991), the Diapason d'Or (1991) and he is the first cellist ever to receive the prestigious Premio Internazionale "Accademia Musicale Chigiana" (1999). Haimovitz studied at the Collegiate School in New York and at the Juilliard School, in the final class of Leonard Rose, after which he continued his cello studies with Ronald Leonard and Yo-Yo Ma. In 1996, he received a B.A. magna cum laude with highest honors from Harvard University. Matt Haimovitz plays a Venetian cello, made in 1710 by Matteo Gofriller.

Mari Kodama's profoundly nuanced yet natural musicality and her unique ability to unite tonal expressivity with a clear sense of form have made her a leading international pianist. An authoritative Beethoven interpreter, Mari Kodama earns consistent praise for her virtuosity across a broad range of repertoire that includes orchestral, chamber, and solo works by composers of all eras.

Mari Kodama will highlight her mastery of such diverse repertoire during her 2019/2020 season as she presents various concerts around the world: She performs Beethoven's Piano Concerto No. 2 in Sweden and Japan with the Gothenburg Symphony Orchestra under the baton of Santtu-Matias Rouvali; in Marseille, she presents Bartók's Piano Concerto No. 2 together with the Orchestre Philharmonique de Marseille and Lawrence Foster; and in Osaka, Japan, she plays Takemitsu's Concerto for Two Pianos and Orchestra with her sister, pianist Momo Kodama. Duo recitals with violinist Veronika Eberle with works by Schubert, Bartok and Franck will also take her to Japan and a contemporary duo recital program with Momo Kodama will bring her to Canada.

Beethoven's piano works form a focal point of Mari Kodama's recording activities, and her interpretations have become standard-setting. She is one of few female pianists to record the composer's complete sonatas, and her 2014 boxed set release (Pentatone) of these pieces – an 11-year-long project – received critical acclaim. On 11 October 2019, she releases Beethoven's Piano Concerto No. 0 WoO 4 – an almost unknown youth work of the composer – which together with his Rondo for Piano and Orchestra WoO 6 and his "Eroica" Variations for Piano Solo op. 35 expands her joint recordings of Beethoven's works for piano with Kent Nagano and the Deutsches Symphonie-Orchester Berlin (Label: Berlin Classics).

In 2018, Pentatone, with whom Mari Kodama shares a long-term collaboration, released her latest recording on this label: Martinu's Concerto for Two Pianos and Orchestra, together with the Orchestre Philharmonique de Marseille under Lawrence Foster and Momo Kodama. Before that, in 2017 Noches en los jardines de España by Manuel de Falla, recorded with the Orchestra de la Suisse Romande under Kazuki Yamada, and in 2016 Tchaikovsky Ballet Suites for Piano Duo with Momo Kodama were added to Mari Kodama's expansive discography. Mari Kodama's other recordings include concertos by Chopin and Loewe with the Russian National Orchestra (Pentatone) and Prokofiev concertos Nos. 1 and 3 and Sonata No. 7 with the Philharmonia Orchestra of London (ASV).

Through her performing activities, Mari Kodama has brought infrequently heard gems of the piano repertoire to global audiences. She has performed Stenhammer's Piano Concerto No. 2 in Gothenberg and in New York and has also collaborated with Viviane Hagner on Alban Berg's Chamber Concerto for Piano and Violin, which they performed with both the Jyväskylä Sinfonia and the DSO. Additionally, in 2013 Mari Kodama premiered Jean-Pascal Beinthus' Double Piano Concerto together with Momo Kodama and the Orchestre Philharmonique de Monte Carlo. Mari Kodama also performed in the Canada premieres of Jörg Widmann's Valse Bavaroise and Humoresken, both at the Canadian Orford Festival in summer 2010.

In addition to festival performances, Mari Kodama plays an active role as a music festival artistic director. She co-founded the Forest Hill Musical Days festival, a cooperative chamber music festival in San Francisco, with her husband Kent Nagano, and she has also led the chamber music series at the Orford Music Festival. In 2018 she assumed artistic directorship at the festival Tra Luce e Sogno in Postignano, Italy, for which she won artists such as Christian Gerhaher, Matt Haimowitz or Gerold Huber.

Mari Kodama was born in Osaka and raised in Germany and Paris. At the Conservatoire National in Paris, she studied piano with Germaine Mounier and chamber music with Genevieve Joy-Dutilleux. She has also worked with Tatiana Nikolaeva and Alfred Brendel. Mari Kodama was appointed as a Steinway Artist. 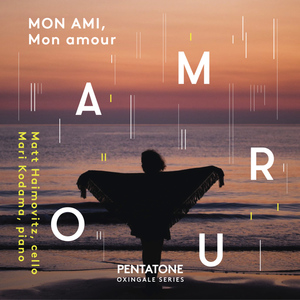 The vibrant, expressive musical palette of cellist Matt Haimovitz and the graceful insight of pianist Mari Kodama meld in MON AMI, Mon amour, the new album from the PENTATONE Oxingale Series, available internationally on November 6, 2020. Haimovitz's soaring cello and Kodama's incisive piano flow together in constant, colorful conversation for rarities by sisters Lili and Nadia Boulanger, in the poignant Kaddish by Ravel and the melancholic Eìleìgie by Milhaud, for iconic works by Poulenc and Debussy, and in beloved gems by Fauré. Framed by the 20th century's two world wars, these French composers overcome profound moments of darkness, never losing sight of their joie de vivre.