Sitar player and composer Anoushka Shankar is a singular figure in the Indian classical and progressive world music scenes. Her dynamic and spiritual musicality has garnered several prestigious accolades, including six Grammy® Award nominations, recognition as the youngest – and first female – recipient of a British House of Commons Shield, credit as an Asian Hero by TIME Magazine, and a Songlines Best Artist Award. Most recently, she became one of the first five female composers to have been added to the UK A-level music syllabus.

Deeply rooted in the Indian Classical music tradition, Anoushka studied exclusively from the age of nine under her father and guru, the late Ravi Shankar, and made her professional debut as a classical sitarist at the age of thirteen. By the age of 20, she had made three classical recordings for EMI/Angel and received her first Grammy® nomination, thereby becoming the first Indian female and youngest-ever nominee in the World Music category. In 2005, Anoushka released her self-produced breakthrough album Rise, which earned her a second Grammy® nomination. Following this nomination Anoushka became the first Indian artist to perform at the Grammy® Awards.

In 2011 Anoushka signed to Deutsche Grammophon, heralding a fertile creative period which was rewarded with three further consecutive Grammy® nominations.  Traveller (produced by Javier Limon), was a critically-hailed exploration of Indian Classical music and Spanish flamenco. This was followed by Traces of You (produced by Nitin Sawhney and featuring Anoushka's half-sister Norah Jones on vocals), and Home, a purely Indian Classical album where she returned to the Ragas her father had taught her.  Through her bold and collaborative approach as a composer, Anoushka has encouraged cross-cultural dialogue whilst demonstrating the versatility of the sitar across musical genres. As a result, Anoushka has created a vital body of work with a prominent roster of artists such as Sting, M.I.A, Herbie Hancock, Pepe Habichuela, Karsh Kale, Rodrigo y Gabriela, and Joshua Bell.

Recent highlights include curating a Tagore Festival at The Globe Theatre in London, dedicated to the legendary Bengali polymath Rabindranath Tagore, and a large-scale Zeitinsel at Dortmund Konzerthaus where she was given a carte-blanche to present four full-length programmes reflecting different aspects of her artistic life.

Besides her career as a composer and performer, Anoushka has authored the book Bapi: The Love of My Life, a biographical portrait of her father, and been a regular columnist for New Delhi's First City magazine and the Hindustan Times.

Anoushka's artistic output increasingly seeks to reflect her impassioned support of women's rights and social justice. In 2011, in response to the horrific gang-rape of Jyoti Singh Pandey in Delhi, Shankar threw her weight behind the campaign One Billion Rising on Change.org.  Following this, she was invited to take part in a special panel on violence against women at the annual Hindustan Times Leadership Summit in New Delhi (2013). Other recent projects include hosting a radio show about gender quality to promote the United Nations Sustainable Development Goals, coordinating a call-to-action to the UK government in response to the current European refugee crisis, which was signed by more than 100 leading British cultural figures and published in the Guardian newspaper in September 2015. In 2016 she leant her voice to a feature-length film documentary, Stolen Innocence, about India's untold story of the world's fastest growing criminal activity of human trafficking.

Her latest album on Deutsch Grammophon, Land of Gold, is her personal response to the humanitarian trauma of displaced people fleeing conflict and poverty.  The release in spring 2016 was followed by tours of North America, India and Europe including performances at wide-ranging venues such as the Royal Festival Hall, Vienna Konzerthaus, Dubai Opera House and at live music festivals including Glastonbury (West Holts), WOMAD and Rudolstadt.   Highlights of the current season include performances of Concerto No 2 with the Berlin Philharmonic, Los Angeles Philharmonic and the New York Philharmonic Orchestras.

Today, from her home in London where she lives with her husband and two sons, Anoushka's career reflects her aim to constantly learn and grow as an artist.  Across continents and demographics, people respond to what she calls the "honesty" in her music, which is integral to her work both in the classical and modern musical spheres. As Nitin Sawhney wrote, "no one embodies the spirit of innovation and experimentation more evidently than Anoushka Shankar." 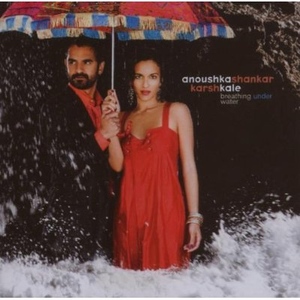 From the time that the great sitar maestro Ravi Shankar attuned Western ears to the eloquence of Indian Classical music, the world has been fertile ground for creating new fusions of culture and music. The evidence is heard in music from the Beatles to Led Zeppelin, as well as that of Anoushka Shankar and Karsh Kale. East meets West with the Anoushka Shankar, Karsh Kale collaboration on Breathing Under Water. The new CD on Manhattan records includes guest tracks by Sting, and Anoushka's sister Norah Jones