Elyse Anne Kakacek is an American lyric soprano praised for her passionate and artful performances in opera, oratorio and contemporary music.  She has been acclaimed as a "stand out performer" (Opera News) who "can seemingly trill on any note in her scale and hold it out for an entire page of the score" (Vocal Arts Chicago).

This season, Elyse will create the role of Maleine with dell'Arte Opera Ensemble in its first commission, Princess Maleine, awarded to Bea Goodwin (libretto) and Whitney George (music), as part of the company's "Voices from the Tower" Festival in August of 2019. She will also appear as the Soprano 1 soloist for Mozart's Great Mass in C minor with the Long Island Symphonic Association.  Earlier this season, Ms. Kakacek was recorded as the soprano voice for Experiment in Opera's podcast opera, Buick City 1AM created by Jason Cady available on iTunes. Elyse was also the soprano soloist in Franz Liszt's Sainte Cecile Legende for a promenade concert at the David A. Koch Theatre at Lincoln Center under the baton of Balint Karosi as a part of the Hungarian State Opera's residency in New York.

Most recently, Elyse has been working on her first album in partnership with Matthan Black of True Capture Records. The recording will champion the complete song cycles of composer Valerie Saalbach and will release on September 1, 2019 via iTunes, Amazon and Spotify.

Last season, Ms. Kakacek reached a career milestone-performing every Mozart/Da Ponte peasant-with her role debut as Zerlina in dell'Arte Opera Ensemble's Don Giovanni at the prestigious La Mama Experimental Theatre- she "almost ran away with the opera" (StageBuddy NYC). The soprano also debuted the roles of Dafne in Caccini's Euridice with The Cantanti Project, First Witch in Verdi's Macbeth with Empire Opera, and Lauretta (cover) in Gianni Schicchi with City Lyric Opera. Elyse made her venue debut at National Sawdust in Brooklyn creating all seven soprano roles for Experiments in Opera's premiere of And Here We Are, a new opera composed for percussion ensemble and gamelan by Matthew Welch, designed by award winning artist Jeanette Oi-Suk Yew.

She also joined Experiments in Opera at Symphony Space to sing six different lead soprano roles for their production Flash Operas, a Netflix- style binge of 20-minute operas based on the short stories of writers from The New Yorker and Saturday Night Live. An advocate for new music, Elyse has worked closely with composers such as Whitney George, Aaron Siegel, Jason Cady, Cristina Lord, Matthew Welch, Gianluca Verlingieri, Balint Karosi, Felix Jarrar and Valerie Saalbach. In 2016 she created the role of Karen in Verlingierei's The Courtship which she premiered in Boston and NYC. Elyse made her Carnegie Hall (Weill) debut interpreting the new works of composer Georgia Shreve with the Manhattan Contemporary Ensemble under the baton of Richard Aulden Clark, and later recorded these works for Ms. Shreve at the legendary Avatar Studios.

Other operatic career highlights include Micaela in Carmen, Nedda in I Pagliacci, Gretel in Hänsel und Gretel, Susanna in Le Nozze di Figaro, Despina in Così fan Tutte,  Norina in Don Pasquale, Musetta in La Bohème, Flora in The Turn of the Screw, Lucia in The Rape of Lucretia, Clorinda in La Cenerentola and Pamina in Die Zauberflöte.

Ms. Kakacek has performed as a soprano soloist in churches across New York City, in works including Pergolesi's Stabat Mater, Bach's St. John Passion, The Coffee Cantata, BWV 151 and BWV 127. She has also appeared as the soprano soloist in Handel's Messiah with numerous orchestras in the US and as the soloist in Beethoven's Choral Fantasy for the International Beethoven Festival in Chicago.

Elyse was a recipient of the The Lynne Harvey Foundation Scholarship in Honor of Her Sister, Virginia Maier from the Musician's Club of Women.She was the First Prize winner for The North International Music Competition,the winner of The Bel Canto Vocal Scholarship in their 31st annual competition,  and the Encouragement Award for the Lyra New York 2018 Mozart Competition. Ms. Kakacek advanced as a New York Regional Finalist for Talents of the World, Inc.'s international competition and the prestigious International Kosciuszko Foundation's Marcella Sembrich Competition. She has participated as a Grand Finalist in competitions such as The Elaine Malbin and Mario Lanza Vocal Competition (NYC), The American Prize Competition, The Harold Haugh Vocal Competition (Michigan) and OperaIdol (Chicago).

In addition to her active performance career, Ms. Kakacek is a co-artistic director and founder of Frisson, a collective dedicated to the filmed expression of classical music. Frisson's first project, L'Eraclito amoroso (in which Elyse sings an aria by Barbara Strozzi) has been screened internationally.

Ms. Kakacek has trained as an actor with the Black Box studio in Chicago and The Gately Poole Institute focusing on the Meisner, Stanislavsky and Checkov techniques. She has completed young artist programs including dell'Arte Opera Ensemble ('17, '18, '19), Opera Pomme Rouge's Resident Artist Program ('16-'17), The Amalfi Coast Music Festival, OpTIC, Chicago Summer Opera, and OperaWorks. She holds an undergraduate degree in Vocal Performance with a minor in Theatre from DePaul University in her hometown, Chicago. Ms. Kakacek currently studies with both Winifred Faix Brown and Deb Birnbaum. Soprano Elyse Kakacek is represented by Wade Artist Management in New York City. 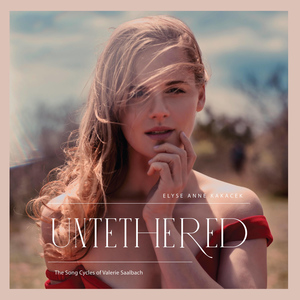