Lisa Batiashvili, Musical America's 2015 Instrumentalist of the Year, is this season's Artist-in-Residence with the Tonhalle-Orchester Zürich. Praised by audiences and fellow musicians for her virtuosity and "profound sensitivity" (Financial Times), the Georgian violinist has developed long-term relationships with some of the world's leading orchestras, including the New York Philharmonic, with whom she was Artist-in-Residence last season.

Recent and forthcoming invitations include concerts at home and on tour with the Royal Concertgebouw Orchestra, Staatskapelle Dresden, Symphonieorchester des Bayerischen Rundfunks, Chamber Orchestra of Europe, The Philadelphia Orchestra and Boston Symphony Orchestra. Last season Lisa performed with Filarmonica della Scala and Staatskapelle Berlin (both under Daniel Barenboim), and Orchestra dell'Accademia Nazionale di Santa Cecilia (Sir Antonio Pappano). She and her husband, François Leleux, also premiered Thierry Escaich's Concerto for violin and oboe with the NDR Sinfonieorchester Hamburg and New York Philharmonic under Alan Gilbert, as part of her residencies with both orchestras.

Recording exclusively for Deutsche Grammophon, Lisa's most recent release is an album dedicated to works by J.S. and C.P.E. Bach, featuring, among others, François Leleux, Emmanuel Pahud and Kammerorchester des Bayerischen Rundfunks. Earlier recordings include the Brahms Violin Concerto with Staatskapelle Dresden (Christian Thielemann), also on DVD, and Shostakovich's Violin Concerto No.1 with Symphonieorchester des Bayerischen Rundfunks (Esa-Pekka Salonen). She has also recorded the Beethoven, Sibelius and Lindberg concertos for Sony.

A student of Ana Chumachenko and Mark Lubotski, Lisa gained international recognition at age 16 as the youngest-ever competitor in the Sibelius Competition. She has been awarded two ECHO Klassik awards, the MIDEM Classical Award, the Choc de l'année, the Accademia Musicale Chigiana International Prize, the Schleswig-Holstein Music Festival's Leonard Bernstein Award and the Beethoven-Ring.

Lisa lives in Munich and plays a Joseph Guarneri "del Gesu" from 1739, generously loaned by a private collector. 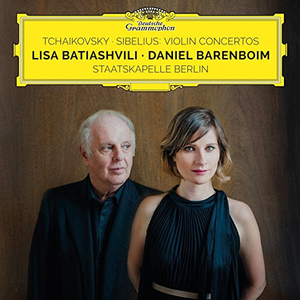 Violinist Lisa Batiashvili adds to her Deutsche Grammophon recordings with this new album of the Tchaikovsky and Sibelius Violin Concertos.  She has performed these works in concert with conductor Daniel Barenboim and the Staatskapelle Berlin, who are her excellent partners for this recording.