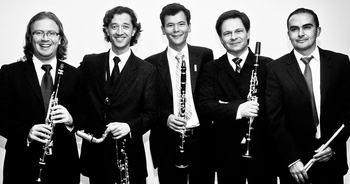 The Caracas Clarinet Quartet is a representative association of the current Venezuelan musical world that supports
its artistic proposal in the
Latin-American repertoire.

Founded on the year 1988, the academic formation and the professional performance of its members, found in chamber music, the path to cultivate and interpret an original repertoire that has considerable
artistic dimensions.

At the present time, Gregory Parra (piccolo and soprano clarinets), Orlando Pimentel (soprano clarinet), Victor Salamanques (alt and soprano clarinet) and Gorgias Sanchez (bass clarinet) form the band. All of them, musicians which most of their academic formation comes from the "Sistema Nacional de Orquestas Juveniles de Venezuela"; the Caracas Clarinet Quartet interprets chamber Latin-American music in a format never heard before, mixing and fusing with originality, elements of the academic, oral tradition and popular music.

Among the musicians that have influenced the concept of this quartet, representative of the Venezuelan school of clarinet in the latest time, in a fundamental way; some people must be mentioned: In the first place Jorge Montilla (at the present, titular professor at the University of the State of Arizona in The United States of America), and Carlos Bello (at the time, main clarinetist of the National Philharmonic Venezuelan Orchestra), both of them founders of this project, who developed soloist careers and then, because their bond as friends and teachers advises of Valdemar Rodreguez, Luis Rossi, Mark Friedman, Walter Boeykens, Howard Klug, Alejandro Rodreguez, Roberto Cedeio, Alberto Naranjo, Jacques Braunstein,
Paul Desenne, Dario Peialoza
and Paquito D'Rivera.

The international career of the Caracas Clarinet Quartet has always been oriented on showing the world a contemporary and original Latin-American musical concept. The interest and rigor of this ensemble to spread the work of present Venezuelan composers, deserves a special mention.

Nowadays, and celebrating their eighteen years of artistic life, the Caracas Clarinet Quartet, in alliance with the Venezuelan label "Cacao Musica", maintains their commitment with excellence, the freedom of creation, the emotion and originality. Their searches, their international projections, their recordings and their concerts reveal this natural capacity that Gregory, Orlando, Victor and Gorgias of finding their way with delicate balance and refinement, within the limits between academic and popular music.