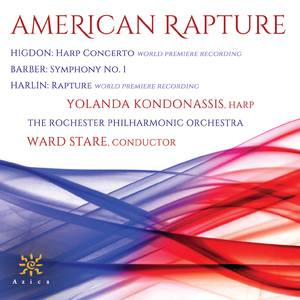 "Yolanda Kondonassis' performance abounds with affectionate detail . .  she plays with a keen sense of dramatic timing and a range of colour that's breathtaking" - Gramophone

Azica Records will release American Rapture featuring harpist Yolanda Kondonassis and the Rochester Philharmonic Orchestra, conducted by Music Director Ward Stare. This album includes the world premiere recording of Pulitzer Prize-winner Jennifer Higdon's Harp Concerto, written for and dedicated to Yolanda Kondonassis; Samuel Barber's Symphony No. 1 in One Movement, Op. 9; and the world premiere recording of Patrick Harlin's Rapture. The album is designed to highlight three generations of American composition and, as defined by Harlin in the context of his work, to depict rapture not as a religious event, but as an experience of extreme human emotion.

Yolanda Kondonassis notes, "We've come to associate many ideas with classical music composition in North America, but even so, there is a tangible and unique essence that embodies the ‘American Sound' in all its forms. This repertoire is just a tip of the iceberg, but with strong threads of that which personifies the American experience: originality, introspection, power, whimsy, pain, joy and grit."

Jennifer Higdon, one of the greatest musical voices of our time, says, "I love writing concerti because it gives me a chance to not only explore the different instruments' qualities, but also because I get to experience the joy of the performer in displaying those qualities. Yolanda Kondonassis' enthusiasm for her instrument is infectious."

Kondonassis echoes, "The journey of bringing Jennifer Higdon's Harp Concerto to life has been an amazing ride. We agreed on many aspects of what a new harp concerto should be – strong, agile, lyrical, feisty, energetic and even heroic when necessary; it should be challenging, but really fun to play, and it should have a groove that allows the harpist to catch a musical wave with the orchestra once in a while. Jennifer managed all this and more, delivering a work that is all at once powerful, heart-wrenching, whimsical, and original."

Kondonassis' tone, and something akin to Renaissance song in Higdon's melodies only heightened the mystery." In the final movement, the critic observes, "The previously conventional concerto acquired a welcome avant-garde, dance-like quality."

Yolanda Kondonassis is celebrated as one of the world's premier solo harpists and is widely regarded as today's most recorded classical harpist. With "a range of colour that's breathtaking" (Gramophone), she has been hailed as "a brilliant and expressive player" (Dallas Morning News), with "a dazzling technique unfailingly governed by impeccable musical judgment" (Detroit News). She has appeared around the globe as a concerto soloist and in recital, bringing her unique brand of musicianship and warm artistry to an ever-increasing audience. Also a published author, speaker, professor of harp, and environmental activist, her many passions are woven into a vibrant and multi-faceted career. With hundreds of thousands of discs and downloads sold worldwide, Kondonassis' extensive discography includes twenty titles and her 2008 release, Air (Telarc), was nominated for a Grammy Award. Ginastera: One Hundred, celebrates Ginastera's 2016 centennial and was released in October 2016 on Oberlin Music. Her many albums have earned universal critical praise as she continues to be a pioneering force in the harp world, striving to push the boundaries of what listeners expect of the harp. The recipient of two Solo Recitalists Grants from the National Endowment for the Arts and a 2011 recipient of the Cleveland Arts Prize, Kondonassis has been featured on CNN and PBS as well as Sirius/XM Radio's Symphony Hall, NPR's All Things Considered and Tiny Desk Concerts, St. Paul Sunday Morning, and Performance Today. In addition to her active solo, chamber music and recording schedule, Kondonassis heads the harp departments at Oberlin Conservatory of Music and The Cleveland Institute of Music, and presents masterclasses around the world. For more information, visit www.YolandaHarp.com.

Jennifer Higdon, Pulitzer Prize and two-time Grammy winner, is one of the most performed living American composers working today. She is a major figure in contemporary Classical music, receiving the 2010 Pulitzer Prize in Music for her Violin Concerto, a 2010 Grammy for her Percussion Concerto and a 2018 Grammy for her Viola Concerto. Most recently, Higdon received the prestigious Nemmers Prize from Northwestern University which is given to contemporary classical composers of exceptional achievement who have significantly influenced the field of composition. She has also been the recipient of a Guggenheim, Koussevitzky, and Pew Fellowships, as well as two awards from the American Academy of Arts & Letters. Higdon enjoys several hundred performances a year of her works, and blue cathedral is one of today's most performed contemporary orchestral works, with more than 600 performances worldwide. Her works have been recorded on more than sixty CDs. Higdon's first opera, Cold Mountain, won the prestigious International Opera Award for Best World Premiere and the opera recording was nominated for 2 Grammy awards. Dr. Higdon holds the Rock Chair in Composition at The Curtis Institute of Music in Philadelphia. Her music is published exclusively by Lawdon Press. For more information, visit www.jenniferhigdon.com.

Ward Stare was appointed the twelfth music director of the Rochester Philharmonic Orchestra in 2014 and has been hailed by The Chicago Tribune as "a rising star in the conducting firmament." Praised by The New York Times for "inspiring musicians to impressive heights," his numerous guest conducting appearances include engagements with the symphony orchestras of Baltimore, Sydney, Pittsburgh, Atlanta, Detroit, and Toronto, as well as with the New World Symphony and Calgary Philharmonic. He made his debut with the Metropolitan Opera in 2017, conducting nine performances of Franz Lehár's The Merry Widow with Grammy-winning mezzo-soprano Susan Graham in the title role. His frequent collaborations with the Lyric Opera of Chicago began in 2012, conducting a production of Hansel and Gretel, returning in 2013 for Die Fledermaus, and again in 2014 to lead Porgy and Bess to rave reviews. Stare served as resident conductor of the Saint Louis Symphony Orchestra from 2008 to 2012 and made his highly successful Carnegie Hall debut with the orchestra in 2009, stepping in to lead H. K. Gruber's Frankenstein. Stare has enjoyed an ongoing relationship with the SLSO and returns frequently as guest conductor. As a passionate advocate for arts education, Ward Stare has served as a Distinguished Artist at the Robert McDuffie Center for Strings at Mercer University since 2012. Stare is an enthusiastic collaborator and champion of new music, including the world premiere performance of ‘Pravda,' by Academy Award-winning composer Elliot Goldenthal and the regional premiere of Pulitzer Prize and Grammy-winning composer Aaron Jay Kernis' Flute Concerto. American Rapture marks Ward Stare's first recording with the Rochester Philharmonic Orchestra. For more information, visit www.wardstare.com.

The Rochester Philharmonic Orchestra (RPO) has been committed to musical excellence since its founding in 1922. The RPO presents approximately 150 concerts and broadcasts a year, serves up to 170,000 people per year through ticketed events, education and community engagement activities, and regularly offers concerts in schools and community centers throughout the upstate New York region. Music Director Ward Stare joins the ranks of former notable RPO music directors, including Eugene Goossens, José Iturbi, Erich Leinsdorf, David Zinman and Conductor Laureate Christopher Seaman. Dedicated to educating and inspiring the next generation of musicians and classical music fans, the RPO reaches thousands of young people every year through its uniquely-designed programs for school-aged children.