Yolanda Kondonassis is celebrated as one of the world's premier solo harpists and is widely regarded as today's most recorded classical harpist. With "a range of colour that's breathtaking" (Gramophone), she has been hailed as "a brilliant and expressive player" (Dallas Morning News), with "a dazzling technique unfailingly governed by impeccable musical judgment" (Detroit News). She has appeared around the globe as a concerto soloist and in recital, bringing her unique brand of musicianship and warm artistry to an ever-increasing audience. Also a published author, speaker, professor of harp, and environmental activist, her many passions are woven into a vibrant and multi-faceted career.

The first harpist to receive the Darius Milhaud Prize, Kondonassis is committed to the advancement of contemporary music for the instrument, with recent premieres including works by Bright Sheng, Keith Fitch, and Gary Schocker. Current projects include a Harp Concerto commission with Jennifer Higdon.

With hundreds of thousands of discs and downloads sold worldwide, Kondonassis' extensive discography includes twenty titles and her 2008 release, Air (Telarc), was nominated for a Grammy Award. Her latest album, Ginastera: One Hundred, celebrates Ginastera's 2016 centennial and was released in October 2016 on Oberlin Music. Her many albums have earned universal critical praise as she continues to be a pioneering force in the harp world, striving to push the boundaries of what listeners expect of the harp.

The recipient of two Solo Recitalists Grants from the National Endowment for the Arts and a 2011 recipient of the Cleveland Arts Prize, Kondonassis has been featured on CNN and PBS as well as Sirius/XM Radio's Symphony Hall, NPR's All Things Considered and Tiny Desk Concerts, St. Paul Sunday Morning, and Performance Today. In addition to her active solo, chamber music and recording schedule, Kondonassis heads the harp departments at Oberlin Conservatory of Music and The Cleveland Institute of Music, and presents masterclasses around the world.

Grammy-winner Jason Vieaux, "among the elite of today's classical guitarists" (Gramophone), is the guitarist that goes beyond the classical. NPRdescribes Vieaux as, "perhaps the most precise and soulful classical guitarist of his generation." His most recent solo album, Play, won the 2015 Grammy Award for Best Classical Instrumental Solo. In June 2014, NPR named "Zapateado" from the album as one of its "50 Favorite Songs of 2014 (So Far)."

Vieaux has earned a reputation for putting his expressiveness and virtuosity at the service of a remarkably wide range of music, and his schedule of performing, teaching, and recording commitments is distinguished throughout the U.S. and abroad. His solo recitals have been a feature at every major guitar series in North America and at many of the important guitar festivals in Asia, Australia, Europe, and Mexico. Recent and future highlights include returns to the Caramoor Festival, Philadelphia Chamber Music Society, and New York's 92Y, as well as his Ravinia Festival debut and performances at Argentina's Teatro Colon and Oslo, Amsterdam's Concertgebouw, and Norway's Classical Music Fest. Vieaux's appearances for Chamber Music Society of Lincoln Center, Bard Music Festival, Music@Menlo, Strings Music Festival, Grand Teton, and many others have forged his reputation as a first-rate chamber musician and programmer. He collaborates in recitals this season with Escher Quartet, acclaimed harpist Yolanda Kondonassis, and accordion/bandoneón virtuoso Julien Labro. Vieaux's passion for new music has fostered premieres of works by Avner Dorman, Dan Visconti, Vivian Fung, Keith Fitch, Kinan Abou-Afach, David Ludwig, Jerod Tate, Eric Sessler, José Luis Merlin and Gary Schocker.

Jason Vieaux has performed as concerto soloist with over 100 orchestras, including Cleveland, Houston, Toronto, San Diego, Ft. Worth, Charlotte, Buffalo, Grand Rapids, Kitchener-Waterloo, Richmond, IRIS Chamber, Chamber Orchestra of Philadelphia, Chautauqua Festival, and New Hampshire Music Festival. Some of the conductors he has worked with include David Robertson, Donato Cabrera, Miguel Harth-Bedoya, Jahja Ling, Stefan Sanderling, Michael Stern, David Lockington, Steven Smith, and Edwin Outwater. During the 2016-2017 season, Jason Vieaux will make appearances with 11 symphony orchestras throughout the US and Canada, including return engagements with the Santa Fe and Edmonton Symphonies, Piazzolla's Double Concerto with Julien Labro and the Arkansas Symphony, and engagements with the symphonies of Niagra, Stockton, Illinois, and West Virginia. Vieaux will also be performing Dan Visconti's new guitar concerto, Living Language, which he premiered with California Symphony in May 2016, with the symphonies of Reading, Fort Wayne, and Richmond.

Vieaux continues to bring important repertoire alive in the recording studio as well. His latest album Together, with harpist Yolanda Kondonassis, was released in January 2015. Of his Grammy-winning 2014 solo album Play, Soundboard Magazinewrites, "If you ever want to give a friend a disc that will cement his or her love for the guitar, this is a perfect candidate," whilePremier Guitar claims, "You'd be hard pressed to find versions performed with more confidence, better tone, and a more complete understanding of the material." Vieaux recently recorded Alberto Ginastera's Sonata for Guitar Op. 47 for a Ginastera Centennial album produced by Yolanda Kondonassis, which will be released in October 2016 on Oberlin Music and features additional performances by Kondonassis, violinist Gil Shaham, and pianist Orli Shaham. Vieaux's album with bandoneonist Julien Labro will also be released in October 2016 on Azica Records.

Vieaux's previous eleven albums include a recording of Astor Piazzolla's music with Julien Labro and A Far Cry Chamber Orchestra; Bach: Works for Lute, Vol. 1, which hit No. 13 on Billboard's Classical Chart after its first week and received rave reviews by Gramophone, The Absolute Sound, and Soundboard; Images of Metheny, featuring music by American jazz legend Pat Metheny (who after hearing this landmark recording declared: "I am flattered to be included in Jason's musical world");andSevilla: The Music of Isaac Albeniz, which made several Top Ten lists the year of its release. Vieaux's albums and live performances are regularly heard on radio and internet around the world, and his work is the subject of feature articles in print and online around the world, including such magazines as Acoustic Guitar, MUSO, Gramophone, and on NPR's "Deceptive Cadence." Vieaux was the first classical musician to be featured on NPR's popular "Tiny Desk" series, on which he made a rare repeat performance in 2015 with Yolanda Kondonassis.

In 2012, the Jason Vieaux School of Classical Guitar was launched with ArtistWorks Inc., an unprecedented technological interface that provides one-on-one online study with Vieaux for guitar students around the world. In 2011, he co-founded the guitar department at The Curtis Institute of Music, and in 2015 was invited to inaugurate the guitar program at the Eastern Music Festival. Vieaux has taught at the Cleveland Institute of Music since 1997, heading the guitar department since 2001.

Vieaux is affiliated with Philadelphia's Astral Artists. His primary teachers were Jeremy Sparks and John Holmquist. In 1992 he was awarded the prestigious GFA International Guitar Competition First Prize, the event's youngest winner ever. He is also honored with a Naumburg Foundation top prize, a Cleveland Institute of Music Alumni Achievement Award, and a Salon di Virtuosi Career Grant. In 1995, Vieaux was an Artistic Ambassador of the U.S. to Southeast Asia. 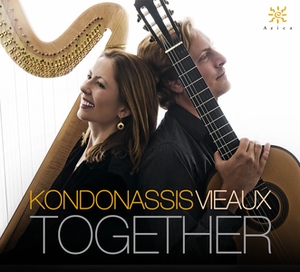 Internationally acclaimed harpist Yolanda Kondonassis and virtuoso classical guitarist Jason Vieaux join forces to release their first duo recording, Together, which features original works for harp and guitar including Alan Hovhaness' Spirit of Trees, Xavier Montsalvatge's Fantasia, Máximo Diego Pujol's Suite Magica, and two world premiere recordings of works commissioned by the duo: Knock on Wood (2012) by Keith Fitch and Hypnotized (2013) by Gary Schocker. Together will be released on Azica Records on January 27, 2015 at all major retailers. The duo will make its New York debut at the 92Y on February 28, 2015 as part of the Art of the Guitar series.

What A Wonderful World