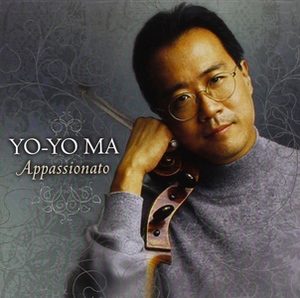 A kind of "musical autobiography," Appassionato presents Ma in collaboration with many of his renowned colleagues, including John Williams, Emanuel Ax, Jeffrey Kahane, Edgar Meyer, Kathryn Stott and Mark O'Connor

Yo-Yo Ma's latest recording for Sony Classical, Appassionato, is a journey through some of the world's most romantic music-from Mendelssohn to Gershwin to John Williams. Appassionato is something of an event in the recording industry, as it marks Yo-Yo Ma's first release since The Essential Yo-Yo Ma appeared in August 2005. With a release date set for January 9, 2007, Appassionato seems an ideal Valentine's Day choice for music lovers.

An exclusive Sony Classical artist, Yo-Yo Ma has amassed an army of admirers via his vast recording legacy. With a CD catalogue of astonishing breadth and depth, he has consistently been one of the top-selling classical artists in the world. His recordings have earned him a total of fifteen Grammy Awards. His lively appearances on a wide range of television programs, from The West Wing to The Tonight Show? to Sesame Street,? have earned him a reputation as the most exciting ambassador for classical music since Leonard Bernstein. He can be heard on the soundtrack recordings of several major feature films, including Crouching Tiger Hidden Dragon and Memoirs of a Geisha. In 1998, he established The Silk Road Project, designed to shed light on the synthesis of cultural ideas along the famous Silk Road.

Many of the works featured on Appassionato have come to be closely identified with Yo-Yo Ma. His impassioned, intensely lyrical performing style-many critics have noted that his playing "sings," and more than a few opera stars have named him as an influence in their own careers-illuminates treasured classics such as the Largo from Vivaldi's "Winter," "The Swan" from Saint-Sa?ns's Carnival of the Animals, and the Allegretto poco mosso from Franck's Sonata in A minor (with pianist Kathryn Stott). Appassionato's musical bounty also includes the Andante con moto from Gershwin's Prelude No. 2, Bandolim's Doce de Coco, the Largo from Kabalevsky's Concerto No. 1 in G minor, "First Impressions" from Appalachia Waltz (the acclaimed collaboration with fiddler Mark O'Connor and bassist and Sony Classical artist Edgar Meyer), the Andante from Brahms' Double Concerto in A minor (with violinist Isaac Stern), and two works by Ennio Morricone, "Nostalgia" and an excerpt from "Gabriel's Oboe."

Appassionato also features three selections that Ma has recorded for the first time: Michio Mamiya's Finnish Folk Song No. 4, "Mikin Pekko," Piazzolla's "Soledad," and Mendelssohn's immortal "Songs Without Words" with Emanuel Ax.? In addition, Zhao's "Swallow Song" has been specially re-recorded for this album.? It first appeared on Silk Road Journeys: Beyond The Horizon.? Another high point is John Williams's "Going to School" from the popular 2005 film Memoirs of a Geisha. In addition to Ma, this selection features the multiple Academy Award-winning composer in a rare appearance on piano. "Going to School" was initially available as an ITunes exclusive during the movie's release, and this marks its first time on a commercially available CD.

While Ma has chosen the works in Appassionato to represent various aspects of love, they also symbolize another type of love, namely Yo-Yo Ma's passion for performing music with friends. Appassionato unfolds as a kind of musical memoir, pairing the cellist with many of the great influences and collaborators of his career. In a never-before published interview included in the CD booklet, Ma recalls many of his famous artistic partnerships. One of his most celebrated collaborations is with pianist Emanuel Ax, who joins him on Appassionato for "Song Without Words." The two men have been friends and colleagues for thirty-five years. "I thought this album would not be complete if Manny wasn't part of it," says Ma.? "We know each other's timing. We kind of feel it. It's a brother kind of thing."

Among Yo-Yo Ma's recent honors is the 2006 Sonning Music Prize, Denmark's top music award. In recognizing Ma-the first cellist to receive the prize since Mstislav Rostropovich was honored in 1981-the Sonning committee pointed to his "everlasting search for new ways to communicate with the audience and his ambition for artistic growth and renewal."