Yanni's grandiose keyboard style is both accessible and exciting, two elements that have led to his success in the realm of adult alternative radio. His explosive, pop-influenced instrumentals and romantic pianistic ballads have also made him a popular touring and recording artist for the Private Music label. In addition to his original television, commercial, and film scores, Yanni's music has been used extensively on programs like Wide World of Sports and coverage of the Olympic games. This aspect of his career seems especially appropriate when you consider that he achieved early success not as a musician, but as a member of the Greek national swimming team. (He broke the national freestyle record at age 14.)

Born in Kalamata, Greece, Yanni arrived in the U.S. after high school and obtained a degree in psychology from the University of Minnesota before diving headfirst into music. It didn't take long for the self-taught keyboardist and composer to establish himself as a studio musician, jingles composer, and producer. After gaining an impressive cult following for his first independently released album, Yanni was picked up by Private Music and has become one of the label's
best-selling artists.

One of the most visible artists in the contemporary instrumental realm, Yanni's rise to fame was expedited in the early '90s by his romantic relationship with actress Linda Evans, which gained him coverage on mainstream programs like Lifestyles of the Rich and Famous as well as appearances on the daytime talk-show circuit.
Linda Kohanov, All Music Guide

Yanni, in collaboration with legendary producer Ric Wake, has discovered and developed four of the most extraordinary young voices in music today. Two years in the making, Yanni returns to the global stage with a dazzling new tour. For the first time ever, Yanni re-interprets his classic compositions and debuts new music introducing show-stopping vocalists Nathan Pacheco, Chloe, Ender Thomas,
and Leslie Mills.

You can preview some of the new music using the player to the right.

See Yanni Voices Live In Concert, The 2009 Tour. Visit the Tour section or click here to get tickets and VIP Packages for what is sure to be the Concert Event of the Year! Expect the unexpected. 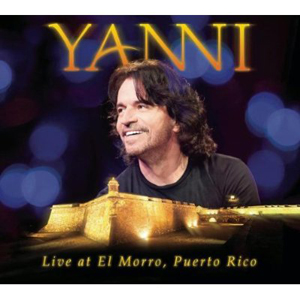 Sony Masterworks is proud to announce the release of YANNI: LIVE AT EL MORRO, PUERTO RICO. The CD and DVD are captured from Yanni's two sold-out shows, which marked the first ever performances at the historic UNESCO heritage site. Yanni is music's true world citizen and one of today's most popular contemporary composers. His 20-year-old dream to perform at the beautiful 16th-century Castillo San Felipe Del Morro in San Juan, Puerto Rico, became a reality last December when he performed and filmed two sold-out concerts in HD and 5.1 Dolby Digital surround sound for international and U.S. broadcast on PBS. The performance at El Morro connects the famed Puerto Rican landmark with other spectacular sites such as the Taj Mahal in India, the Acropolis in Greece and the Forbidden City in China, that have played host to Yanni's world-renowned performances.