American composer William Susman has created a distinctively expressive voice in contemporary classical music, with a catalog that includes orchestral, chamber, and vocal music, as well as numerous film scores. In addition to his work as a composer, he spearheads the contemporary ensemble OCTET and Belarca Records. AllMusic calls him an exemplar of "the next developments in the sphere . . . [of] minimalism," and textura describes him as "not averse to letting his affection for Afro-Cuban, jazz, and other forms seep into his creative output." His music has earned praise from The New York Times for being "vivid, turbulent, and rich-textured," from Gramophone as "texturally shimmering and harmonically ravishing," and from textura for being "entrancing . . . harmonious and vibrant."

Susman's training as both a jazz and classical pianist was influential in his evolution as a composer. His academic training in composition grounded him in the traditions of mid-century modernism, and he was particularly fascinated by the sounds and techniques of Xenakis and Ligeti. He became increasingly dissatisfied with the expressive and formal limitations of post-war modernism, though, and began to incorporate more diverse elements and influences – free jazz, Afro-Cuban techniques, as well as other non-Western traditions – in what has become his recognizably American and individual voice. His music uses an eclectic array of devices, from medieval isorhythm and hocket to Afro-Cuban clave and montuño rhythmic patterns. With this toolkit, he crafts a bold sound world both familiar and complex, with highly energetic grooves and hypnotic modal-based harmonies.

Susman's music is uniquely suited to film, and he is widely recognized for scoring such award-winning works as Native New Yorker (Best Documentary Film, Tribeca Film Festival), which has been included in over 30 film festivals worldwide and was honored in 2015 as one of the best in American experimental film by the National Gallery of Art, Washington D.C. His film catalog includes scores for more than a dozen documentaries, including Oil on Ice, awarded the Pare Lorentz award by the International Documentary Association.

First appearing on the international scene after receiving a BMI award in 1985, Susman was selected by Earle Brown to receive a commission from the Fromm Foundation. The resulting work, Trailing Vortices (1986), premiered at the Aspen Music Festival and went on to win an ASCAP Foundation Young Composer Award. It has received numerous international performances, including with the Netherlands Radio Chamber Orchestra, where it was featured at the Gaudeamus Festival. His orchestral and chamber works have been widely performed in the U.S., Europe, China, and Japan, and his music has been played and recorded by soloists such as cellist Joan Jeanrenaud, percussionist Joseph Gramley of the Silk Road Ensemble, percussionist Greg Zuber and flutist Patricia Zuber of the MET Orchestra, and pianist Vanessa Wagner.

In 2011, Susman founded the ensemble OCTET with the goal of expanding his imaginative sound world and creating a new voice for contemporary ensembles.  OCTET takes the instrumentation of the American Big Band and scales it down to a brass section of saxophone, trumpet, and trombone, with a rhythm section of piano, electric piano, double bass, and drums, plus vocals. Its critically acclaimed album debut, Scatter My Ashes, featured original music by Susman and reached No. 1 on Amazon's Classical Hot New Releases, No. 8 on Billboard's Classical Charts, and was also chosen as Album of the Month in the October 2014 issue of textura magazine. OCTET can be heard broadcast on WNYC, Concertzender Radio (Netherlands), and NPR. In 2012, Susman founded the record label Belarca (with distribution by Naxos), which gives wider exposure to OCTET and to new composers from around the world.

A Chicago native, Susman received a Bachelor of Music degree from the University of Illinois, and subsequently accepted a graduate fellowship at Stanford, working at the Center for Computer Research in Music and Acoustics. He studied under Herbert Brün, Salvatore Martirano, Ben Johnston, and John Chowning. His albums are available on Belarca Records and distributed by Naxos. His scores are sold at susmanmusic.com and his percussion music is distributed by Steve Weiss Music. 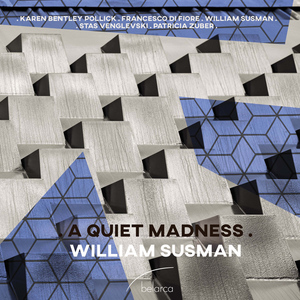 "When you think you have a clear idea of a composer's purpose, suddenly you realize that something is hiding behind it, and behind it, again and again. I will keep playing William Susman's music for a long time." –Francesco Di Fiore, 2012

Violinist Karen Bentley Pollick, pianist Francesco Di Fiore, bayan accordionist Stas Venglevski, and flutist Patricia Zuber have been knitting restorative sonic garments from the compositional yarn of William Susman for over a decade. Their rapport is deeper and more apparent than ever on A Quiet Madness, an appropriately titled new masterwork for our zeitgeist.

A Quiet Madness immerses the listener in a photorealistic sound world of understated beauty. At once calming and thought-provoking, it allows the ear and mind to make their own connections without feeling overwhelmed by thematic constraints. Susman's precise harmonic and rhythmic languages invite us into a subdued, enchanting expression of madness that roams all over the map, akin to the mind wandering during a rainy day-or, perhaps clairvoyantly, akin to the strange passage of time spent in self-isolation during the collective trauma of COVID-19.