March 2014 marks the release of Mutations, Iyer's eighteenth album and his debut for the prestigious ECM label: a recording for piano, string quartet and electronics, the first album to document his works for chamber ensembles.  His previous release, Holding It Down: The Veterans' Dreams Project (2013), is his third collaboration with poet Mike Ladd, based on the dreams of veterans of color from America's wars in Iraq and Afghanistan. It was hailed as #1 Jazz Album of the Year by the Los Angeles Times and described in JazzTimes as "impassioned, haunting, [and] affecting."

Two tremendously acclaimed and influential albums, Accelerando (2012) and Historicity (2009), both feature the Vijay Iyer Trio (Iyer, piano; Marcus Gilmore, drums; Stephan Crump, bass), recently described by PopMatters as "the best band in jazz." Accelerando was voted #1 Jazz Album of the Year for 2012 in three separate critics polls surveying hundreds of critics worldwide, hosted by Downbeat, Jazz Times, and Rhapsody, respectively, and also was chosen as jazz album of the year by NPR, the Los Angeles Times, PopMatters, and Amazon.com.  Historicity was a 2010 Grammy Nominee for Best Instrumental Jazz Album, and was named #1 Jazz Album of 2009 in The New York Times, The Los Angeles Times, the Chicago Tribune, the Detroit Metro Times, National Public Radio, PopMatters.com, the Village VoiceJazz Critics Poll, and the Downbeat International Critics Poll. The trio won the 2010 Echo Award for best international ensemble and the 2012 Downbeat Critics Poll for jazz group of the year.

A polymath whose career has spanned the sciences, the humanities and the arts, Iyer received an interdisciplinary Ph.D. in the cognitive science of music from the University of California, Berkeley. He has published in Journal of Consciousness Studies, Wire, Music Perception, JazzTimes, Journal of the Society for American Music, Critical Studies in Improvisation, in the anthologies Arcana IV, Sound Unbound, Uptown Conversation, The Best Writing on Mathematics: 2010, and in the forthcoming Oxford Handbook of Critical Improvisation Studies.  Iyer has taught at Manhattan School of Music, New York University, and the New School, and he is the Director of The Banff Centre's International Workshop in Jazz and Creative Music, an annual 3-week program in Alberta, Canada founded by Oscar Peterson. Iyer recently finished a multi-year residency with San Francisco Performances, performing and working with schools and community organizations. In 2014 he began a permanent appointment at Harvard University's Department of Music, as the Franklin D. and Florence Rosenblatt Professor of the Arts.

"The Vijay Iyer Trio has the potential to alter the scope, ambition and language of jazz piano forever."
- Jazzwise (UK) 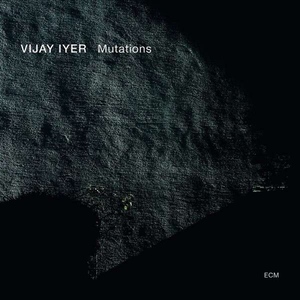 Mutations is Vijay Iyer's first album as a leader for ECM, and a recording that will widen perceptions of the pianist-composer's work. At its center is "Mutations I-X", a composition scored for string quartet, piano, and electronics. A major piece built out of cells and fragments, it veers through many atmospheres, from moment to moment propulsive, enveloping, lyrical, luminescent, and strangely beautiful. Through thematic interactivity, the interweaving of acoustic and electronic sound-textures, and some decisive improvisational interventions in notated music, Vijay Iyer has created a multi-faceted suite whose very subject is change. Iyer gives a positive value to the concept of ‘mutation' in this music, and variously appears in it as an interpreter of notated elements, as an improviser, and as  "a sort of laptop artist, mixing in noise and different sounds," encouraging the transformative processes.