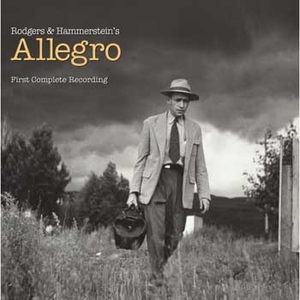 "It is a law of our civilization that as soon as a man proves he can contribute to the well-being of the world, there be created an immediate conspiracy to destroy his usefulness, a conspiracy in which he is usually a willing collaborator.  Sometimes he awakens to his danger and does something about it.
That is the story of ALLEGRO
."
-- Oscar Hammerstein II


"Of all the musicals I ever worked on that didn't quite succeed,
ALLEGRO is one I think most worthy of a second chance."
-- Richard Rodgers

A cast of stars from the worlds of Broadway and opera was assembled for this unprecedented studio recording.  Featured on the CD are Patrick Wilson as Joe Taylor, Jr.; Nathan Gunn and Audra McDonald as Joe's parents; Marni Nixon as Joe's Grandma; Judy Kuhn as Beulah; Liz Callaway as Emily; Laura Benanti as Jennie; and Norbert Leo Butz as Joe's best friend, Charlie.

ALLEGRO, Rodgers & Hammerstein's fourth work together, debuted in 1947 preceded by the Broadway musicals OKLAHOMA! and CAROUSEL, and the film STATE FAIR.  A somewhat controversial work, the show ran for a season and earned some rave reviews, but nevertheless was their first musical to be less than a blockbuster hit.  ALLEGRO divided critics and challenged audiences with an unusual style of storytelling, and a groundbreaking approach to musical staging.  In the words of Stephen Sondheim, the production marked "the first really good experimental show."

An original musical, ALLEGRO tells the story of an earnest country doctor, Joseph Taylor, Jr. and follows his life from cradle to adulthood.  His journey -- both literal and moral – spans from small town to big city, and back again.  The score is unconventional: fragments of song move in and out of the action like passing thoughts; melodies flit by in one scene only to take hold and blossom in the next.  Major songs are given to minor characters, while the central character has comparatively little solo work.  A chorus provides spoken commentary and sings aloud inner thoughts.  Original director/choreographer Agnes de Mille's extended ballet sequences are reflected in intriguing orchestral pieces.

"Along with the innovations of the original production, ALLEGRO's score has its own innovative qualities, most of which are simply unknown," says Ted Chapin, President of The Rodgers & Hammerstein Organization.  He continues, "To do justice to the show that Rodgers and Hammerstein created, I have long wanted to capture the score in a way that explains to us all how the musical tapestry of ALLEGRO was conceived.  It is almost through composed, using elements of songs in distinct, dramatic ways, which has led people to assume -- incorrectly -- that it is a lesser work.  To the contrary:  ALLEGRO is extraordinary, landing chronologically between CAROUSEL and SOUTH PACIFIC, when the team was at its zenith.  My hope is that this recording will introduce this compelling work to musical theater lovers in the best way possible – and I am thrilled that we have been able to attract such a stellar group of artists to join us."

"It has taken a very long time to give the score of ALLEGRO the full attention it deserved," concludes Chapin, "We've taken a lot of care to make it sound as close as possible to the way Messrs. Rodgers and Hammerstein intended it to over sixty years ago."

In addition to this release of the new ALLEGRO recording, Masterworks Broadway is pleased to announce the upcoming 50th Anniversary special edition of the Original Broadway Cast Recording of THE SOUND OF MUSIC (due Fall 2009), and the label will celebrate its unparalleled catalogue of Rodgers & Hammerstein cast recordings with special new digital-only editions of classic recordings in the year ahead.  The first group of digital releases (CAROUSEL, OKLAHOMA!, "VICTORY AT SEA" – details below) will be available on all digital service providers, including iTunes and Amazon MP3 stores on Tuesday, February 3 coinciding with the release of ALLEGRO.  CDs, complete with each album's original cover art and liner notes, available for burn-on-demand exclusively through ArkivMusic.

ABOUT THE MASTERWORKS BROADWAY DIGITAL RELEASES:

• The 1965 Music Theater of Lincoln Center recording of CAROUSEL, featuring its original star John Raitt, will be extended with tracks from Raitt's 1952 studio recording of excerpts from CAROUSEL, as well as a 1955 studio recording of the musical with opera stars Robert Merrill and Patrice Munsel, led by one of Broadway's most authoritative maestros, Lehman Engel.  Digital booklet to include exclusive rare recording session photographs shown for the first time.

• Available for digital download for the first time will be a classic 1952 studio recording of OKLAHOMA! with a cast led by the legendary operetta star Nelson Eddy, also with Lehman Engel conducting.  Bonus tracks on this recording will include the first release since the LP era of John Raitt's studio recording of excerpts from OKLAHOMA!

• Making its first appearance since the LP era is what may be composer Richard Rodgers' only major recording as a conductor of his own music, leading the New York Philharmonic in 1954 performances of selections from his score for the TV documentary series "VICTORY AT SEA," the "Carousel Waltz" from CAROUSEL, "Slaughter on Tenth Avenue" ballet from ON YOUR TOES, the "March of the Siamese Children" from THE KING AND I and an arrangement of his greatest waltz melodies. Bonus material will include an audio interview with Rodgers conducted by record producer Goddard Lieberson.

For updates and more news on the first complete recording of ALLEGRO, please visit www.feature.masterworksbroadway.com/allegro.