The most important jazz musicians are the ones who are successful in creating their own original world of music with its own rules, logic, and surprises. Thelonious Monk, who was criticized by observers who failed to listen to his music on its own terms, suffered through a decade of neglect before he was suddenly acclaimed as a genius; his music had not changed one bit in the interim. In fact, one of the more remarkable aspects of Monk's music was that it was fully formed by 1947 and he saw no need to alter his playing or compositional style in the slightest during the next 25 years.

Thelonious Monk grew up in New York, started playing piano when he was around five, and had his first job touring as an accompanist to an evangelist. He was inspired by the Harlem stride pianists (James P. Johnson was a neighbor) and vestiges of that idiom can be heard in his later unaccompanied solos. However, when he was playing in the house band of Minton's Playhouse during 1940-1943, Monk was searching for his own individual style. Private recordings from the period find him sometimes resembling Teddy Wilson but starting to use more advanced rhythms and harmonies. He worked with Lucky Millinder a bit in 1942 and was with the Cootie Williams Orchestra briefly in 1944 (Williams recorded Monk's "Epistrophy" in 1942 and in 1944 was the first to record "‘Round Midnight"), but it was when he became Coleman Hawkins' regular pianist that Monk was initially noticed. He cut a few titles with Hawkins (his recording debut) and, although some of Hawkins' fans complained about the eccentric pianist, the veteran tenor could sense the pianist's greatness.

The 1945-1954 period was very difficult for Thelonious Monk. Because he left a lot of space in his rhythmic solos and had an unusual technique, many people thought that he was an inferior pianist. His compositions were so advanced that the lazier bebop players (although not Dizzy Gillespie and Charlie Parker) assumed that he was crazy. And Thelonious Monk's name, appearance (he liked funny hats), and personality (an occasionally uncommunicative introvert) helped to brand him as some kind of nut. Fortunately, Alfred Lion of Blue Note believed in him and recorded Monk extensively during 1947-1948 and 1951-1952. He also recorded for Prestige during 1952-1954, had a solo set for Vogue in 1954 during a visit to Paris, and appeared on a Verve date with Bird and Diz. But work was very sporadic during this era and Monk had to struggle to make ends meet.

His fortunes slowly began to improve. In 1955, he signed with Riverside and producer Orrin Keepnews persuaded him to record an album of Duke Ellington tunes and one of standards so his music would appear to be more accessible to the average jazz fan. In 1956 came the classic Brilliant Corners album, but it was the following year when the situation permanently changed. Monk was booked into the Five Spot for a long engagement and he used a quartet that featured tenor saxophonist John Coltrane. Finally, the critics and then the jazz public recognized Thelonious Monk's greatness during this important gig. The fact that he was unique was a disadvantage a few years earlier when all modern jazz pianists were expected to sound like Bud Powell (who was ironically a close friend), but by 1957 the jazz public was looking for a new approach. Suddenly, Monk was a celebrity and his status would not change for the remainder of his career. In 1958, his quartet featured the tenor of Johnny Griffin (who was even more compatible than Coltrane), in 1959 he appeared with an orchestra at Town Hall (with arrangements by Hall Overton), in 1962 he signed with Columbia and two years later was on the cover of Time. A second orchestra concert in 1963 was even better than the first and Monk toured constantly throughout the 1960s with his quartet which featured the reliable tenor of Charlie Rouse. He played with the Giants of Jazz during 1971-1972, but then in 1973 suddenly retired. Monk was suffering from mental illness and, other than a few special appearances during the mid-'70s, he lived the rest of his life in seclusion. After his death it seemed as if everyone was doing Thelonious Monk tributes. There were so many versions of "‘Round Midnight" that it was practically a pop hit! But despite the posthumous acclaim and attempts by pianists ranging from Marcus Roberts to Tommy Flanagan to recreate his style, there was no replacement for the original.

Some of Thelonious Monk's songs became standards early on, most notably "‘Round Midnight," "Straight No Chaser," "52nd Street Theme," and "Blue Monk." Many of his other compositions have by now been figured out by other jazz musicians and are occasionally performed including "Ruby My Dear," "Well You Needn't," "Off Minor," "In Walked Bud," "Misterioso," "Epistrophy," "I Mean You," "Four in One," "Criss Cross," "Ask Me Now," "Little Rootie Tootie," "Monk's Dream," "Bemsha Swing," "Think of One," "Friday the 13th," "Hackensack," "Nutty," "Brilliant Corners," "Crepuscule With Nellie" (written for his strong and supportive wife), "Evidence," and "Rhythm-a-Ning," Virtually all of Monk's recordings (for Blue Note, Prestige, Vogue, Riverside, Columbia, and Black Lion) have been reissued and among his sidemen through the years were Idrees Sulieman, Art Blakey, Milt Jackson, Lou Donaldson, Lucky Thompson, Max Roach, Julius Watkins, Sonny Rollins, Clark Terry, Gerry Mulligan, John Coltrane, Wilbur Ware, Shadow Wilson, Johnny Griffin, Donald Byrd, Phil Woods, Thad Jones, and Charlie Rouse. His son Thelonious Monk, Jr. (T.S. Monk) has helped keep the hard bop tradition alive with his quintet and has headed the Thelonious Monk Institute, whose yearly competitions succeed in publicizing talented young players. ~ Scott Yanow 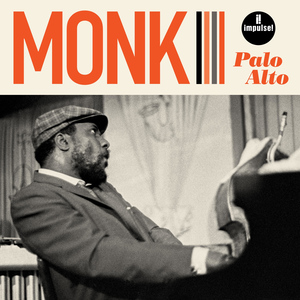 In the fall of 1968, a sixteen-year old high school student named Danny Scher had a dream to invite legendary jazz pianist and composer Thelonious Monk and his all-star quartet to perform a concert at his local high school in Palo Alto, CA. In a series of twists and turns, against a backdrop of racial tension and political volatility, that concert was recorded by the school's janitor. Palo Alto is now available  physically on Impulse! Records and digitally on Legacy Recordings, the catalog division of Sony Music Entertainment.