Song of Lahoreis an East-meets-West event album featuring The Sachal Ensemble of Pakistan collaborating with a starry assembly of artists – ranging from Wynton Marsalis, Meryl Streep and Madeleine Peyroux to Susan Tedeschi & Derek Trucks, My Morning Jacket's Jim James and Wilco's Nels Cline, among many others across Jazz, Rock, R&B and Americana

The Sachal Ensemble's Nijaat Ali says about the Song of Lahore projects: "God willing, this will help the entire world see that Pakistanis are artists, not terrorists."

In the relatively safe space of the Western world, artists and listeners enjoy the ability to follow their muse wherever it takes them – to create and commune with music freely, to express themselves and exchange with others. But in other, far less fortunate places, this can never be taken for granted; even venerable musical traditions can be repressed or even banned, causing a living culture to wither. No music lover could fail to be moved by the inspiring story of The Sachal Ensemble as depicted in the documentary film Song of Lahore by two-time Academy Award-winning director Sharmeen Obaid-Chinoy and Andy Schocken. The musicians of The Sachal Ensemble come from the Pakistani city of Lahore, for hundreds of years a thriving center of the arts on the Indian subcontinent. By the 1960s and '70s, Lahore was the home of "Lollywood," the Pakistani equivalent of India's Bollywood film production center, employing many musicians who were virtuosos on their instruments and had developed a distinctive sound and sensibility. But in 1977, with the establishment of a conservative Islamic regime and Sharia law in Pakistan, music was outlawed as "a sin against God." Esteemed musicians were soon out of work, having to hide their instruments away to take jobs in coffee shops or driving rickshaws.

"We were losing our instruments, losing our musicians, losing our culture – something had to be done about it," said Sachal Ensemble producer Izzat Majeed. By the early 2000s, Majeed had convened a devoted group of surviving Lahore musicians to rehearse and record privately within his Sachal Studios – to revive their tradition, to keep it alive. They made recordings of classical and folk music at first; but, with local listeners for the music having dwindled away, the group began to make music for a global audience, outside Pakistan. As a child, Majeed had seen the Dave Brubeck Quartet when the group stopped in Lahore on a 1950s State Department "Jazz Ambassadors" tour, leading to his lifelong love of jazz. So, blending their age-old tradition with American jazz, The Sachal Ensemble created a YouTube sensation with an infectious version of "Take Five," the iconic Brubeck hit. Brubeck himself said of the Sachal interpretation, "It's the most interesting and different recording of ‘Take Five' that I've ever heard." A new energy and renown led to The Sachal Ensemble being invited in 2014 to collaborate in a concert with Wynton Marsalis and his Jazz at Lincoln Center Orchestra in New York City – an intense but ultimately jubilant experience captured in Obaid-Chinoy and Schocken's film.

The album Song of Lahore – to be released by Universal Music Classics on May 20, 2016 – is not a traditional soundtrack to the documentary but rather a fully integrated East-meets-West companion album inspired by the sounds and story of the film. Produced by Grammy Award-winner Eli Wolf (Norah Jones, Robert Glasper), Song of Lahore features The Sachal Ensemble in cross-cultural, genre-bending collaborations with artists from across the spectrum of Jazz, Rock, R&B and Americana. "You hear the term 'world music' thrown around a lot," Wolf says, "but this album is truly music of the world, with songs and artists from New Orleans, Kentucky, New York, Philadelphia, Los Angeles, the U.K., Jamaica, Brazil, Greece, Pakistan and more all brought together." For the album opener, Marsalis reunited with the Sachal players to play trumpet on a re-imagined "Blue Pepper (Far East of the Blues)," from Duke Ellington's LP Far East Suite. Bohemian chanteuse Madeleine Peyroux sings on a "mash-up" of the African-American spiritual "Sometimes I Feel Like A Motherless Child" with Pakistani hymn "Mai Ni," while New York-via-Tokyo duo Cibo Matto puts a new urban spin on Bob Marley & Peter Tosh's "Get Up, Stand Up."

Ensconced in a Manhattan recording studio, the core Sachal musicians worked side by side with a sympathetic crew of New York session players led by multi-instrumentalist and album music director/arranger Michael Leonhart (Mark Ronson, Donald Fagen). They overcame language and cultural barriers to create fresh music together, including a remake of the vintage Lollywood soundtrack version of Pakistani folk song "Dama Dam Mast Qalander." That's a tune that Wolf and Leonhart were fans of from The Sound of Wonder!– a compilation of vintage Lollywood soundtrack/pop hybrids, from "Space Age cinematic surf" to "Urdu funk." That LP underscored the fact that East-meets-West sounds were a tradition of their own in Lahore, a practice that members of The Sachal Ensemble contributed to over their thousands of soundtrack sessions in years gone by (with several Sachal players even appearing on tracks included on The Sound of Wonder!).

Brian Wolfe, the New York drummer on the session who plays with the likes of Sharon Jones & the Dap Kings, bonded with Sachal's tabla ace, Ballu Khan, the two of them able to communicate wordlessly through their own unique, yet complementary, polyrhythmic virtuosity. "It didn't happen on the first day," Wolf explains, "but the gradual interchange between the Eastern and Western musicians as with Brian and Ballu was really beautiful." To Marsalis, the coming together of The Sachal Ensemble with Western musicians underscores "the leadership that musicians can take in demonstrating the fundamental humanity and commonality that we all share."

Sachal's Baqir Abbas is a master of the wooden bansuri flute and makes his instruments with his own hands, so that they "feel more precious than your own soul," he says. "Then all the stories of the world will play from it." One of the expressive stars of the Song of Lahore documentary, he also enlivens the Song of Lahore studio album, his melodically cascading flute a highlight of such tracks as "Blue Pepper" and "I Wish I Knew How It Would Feel to Be Free." But back home, Abbas has to practice in a soundproofed room, because musicians are considered being of a lower caste in modern Pakistan. Of the conservative Islamists there who judge musicians harshly, he says: "They find God in… whatever their beliefs are. We find God in music." Music has been in the family of Sachal violinist, vocalist, harmonium player and arranger Nijaat Ali for seven generations. He learned from his late father, a veteran of the Lahore film studios, who had passed along his knowledge to the new Sachal Ensemble. With projects like Song of Lahore in mind, Ali says: "God willing, this will help the entire world see that Pakistanis are artists, not terrorists."

The Song of Lahore film is ultimately about how "human beings are more alike than we are different," says Leonhart, "and I think our album reflects the same existential truth. I've always seen music as medicine for the pain of life. The Sachal guys, having endured religious and creative persecution, have to struggle to get to a place where they are allowed to express themselves. Just seeing those musicians in the film, I knew it would be possible to create something with them – I didn't know what, exactly, but I knew that we could make music. Just seeing them play ‘Take Five' or hang with Wynton, we knew there was musicianship there. And once we were in the studio with them, we could tell that this feel the key Sachal guys have – Baqir the flautist, Ballu the tabla player, Asad Ali the guitarist – is just pure soul music. It's like Stax or Motown. There's something about the natural syncopation that Pakistani music has – it's a kind of life-affirming swing. I think that's what drew Wynton to it."

For the album Song of Lahore, musicians from across expanses of geography and culture teamed to express a collaborative message of understanding and hope – a message that is all the more worth sending given that it goes against the odds in today's fractious world. "The album mirrors the meta-message of the documentary – which is that music is the universal language, a bridge across divides and between cultures," Wolf says. "It's dark times in Pakistan now. In the film, Wynton alludes to the blues and how all oppressed cultures seem to have their own version of it. I love the writings of Albert Murray, and he has this theory of the heroic nature of the blues – how in the darkness, you can find the light through art. Music is transformative and transcendent in that way. When you look at the songs we chose – whether it's ‘(What's So Funny 'Bout) Peace, Love & Understanding' or ‘Yes, We Can Can' or ‘Give Me Love (Give Me Peace on Earth)' –they're expressing this universal ideal of hope and humanity. That's the message of this album, and it's both timely – given all that's happening in the world today – and timeless."
-Bradley Bambarger 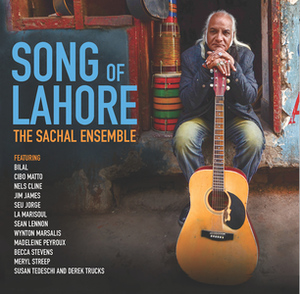 "Song Of Lahore" is the latest feature-length documentary from Oscar-winning documentarian Sharmeen Obaid-Chinoy. Set in Lahore, Pakistan and New York City, the story follows the members of Pakistan's Sachal Ensemble, a group of master musicians who find international recognition after decades of being forced underground by dictators and religious extremists. Universal Music Classics was enlisted to create not a "soundtrack" to the movie in the traditional sense. Rather, what will be available as a standalone music piece is a companion album to the film, called Sounds Of Lahore. In effect, the album is an "East Meets West" concept project. These songs originate from Pakistan, India, the United States and Jamaica; and all of them are centered on the theme of universal love and hope. The way in which through music, we find the light within the darkness. The album is produced by Grammy-winning producer Eli Wolf (Norah Jones, Al Green, Willie Nelson, Robert Glasper, Elvis Costello).