In winter of 1946, Errol Flynn purchased Navy Island for the princely sum of US$80,000. For the next decade that small swath of land, not even 100 yards from the beaches of Port Antonio, became the berthing place for Flynn's yacht Zaca, and the staging point for his unending parties that is today the stuff of legend. The entertainment Flynn featured most often in those days was a small local group called the Navy Island Swamp Boys which consisted of Noel Lynch on guitar, Moses Deans on banjo and "Papa" Brown on rumba box. The mentos, calypsos and rumbas they played were the perfect soundtrack for Flynn and company's bacchanalian excesses. 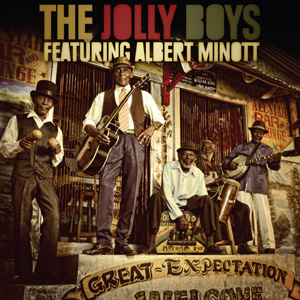 Entertainment One Music and Geejam Recordings are excited to announce that Jamaica's legendary Jolly Boys have released their first album in 20 years. Entitled Great Expectation, it's a collaborative project between Geejam's Jon Baker and Wall of Sound's Mark Jones and the results are 12 joyous interpretations of contemporary songs given a modern Mento makeover. While Jamaica is known for its reggae and ska, Mento is the original sound of the island and the forerunner to these two genres. With an amazing history spanning 60 years, The Jolly Boys name is synonymous with the Mento sound and they are arguably the most recognizable Mento band in the world.