"…one of the best jazz bands in NY today." – Forbes

"Not so much reviving standards as taking defib paddles to them and jolting them back to life." – The Patriot-Ledger

Take a blustery brass lineup, layer it over a rhythm section led by a stride-piano virtuoso in the Fats Waller vein, and tie the whole thing together with a one-of-the-boys frontwoman with a voice from another era, and you have the Hot Sardines. (We haven't even told you about the tap dancer yet.)

It's a great American success story worthy of the cinema. A born-and-bred NYC actor meets a Parisian-born writer at an open jazz jam over a noodle shop in Manhattan, and from there the Hot Sardines were born. Bandleader Evan "Bibs" Palazzo and lead singer Miz Elizabeth combine with the Sardine ensemble of powerhouse musicians – and their very own tap dancer – to play "hot jazz" as it was in the era when live music was king…with a little glamour, a little grit, and a lot of passion.  Even while giving voice to the history-defining jazz of the 1920s, '30s, and '40s, the Hot Sardines' vibrant performances bridge generations and captivate 21st century audiences. Forbes Magazine calls them "one of the best jazz bands in NYC today."

The Hot Sardines have a distinctive recipe for making musical magic: take a blustery brass lineup, layer it over a rhythm section led by a stride-piano virtuoso in the Fats Waller vein, and tie it all together with a one-of-the-boys frontwoman who sings in both English and French with a voice from another era. The brainchild of Bibs and Miz Elizabeth, the Sardine sound fuses musical influences from New York, Paris, and New Orleans that were nurtured from the Prohibition era through the Great Depression, WWII and beyond. "Greats like Fats Waller, Louis Armstrong, Thelonious Monk, Django Reinhardt, Count Basie, Fred Astaire, Mamie Smith, Billie Holiday, the Andrews Sisters, Ray Charles and a full-on melting pot of musicians both iconic and obscure have influenced our style and song interpretation," says Miz Elizabeth, who helps fuel the Sardine mission to transform songs from another era into pop music for this century. Bibs shares that passion, and together they carefully manage the delicate balance of showcasing old songs – some of them nearly a century old – without being an "old-timey band." Says Evan, "We don't treat this music with kid gloves, or place it on a pedestal to preserve and adore…we just play it…as if these songs were written this morning, for today's generation." The dramatically diverse age range among the Hot Sardines' fan base reflects their success at making the classics relevant to current audiences, and Vanity Fair applauds their "unique repertoire, and a sound and style that are distinctly their own."

In October 2014, their debut self-titled album on the Decca/Universal Music Classics label will launch in the U.S. and internationally, and features a collection of both early jazz classics and original Sardine compositions. Producer Eli Wolf (Norah Jones, Al Green, Elvis Costello & the Roots) of the Sardines' album for Decca/UMC has deep respect for the Hot Sardines' musicianship and performance style, applauding their "reverence for the jazz age, balanced with a playful nod to the present." The album launch marks a defining moment in the Sardines' evolution, which started as a slow burn fueled by a shared passion for music from another era, and escalated as the band's performances ignited the same passion in audiences all over the world.

The irony of the Hot Sardines' success is rooted in its origins: it was started by two non-musicians who never set out to form a band.

Miz Elizabeth, who grew up living in several countries including France, Canada, and the Ivory Coast, sports a Masters Degree in Media and Communications from the London School of Economics and spent her pre-Sardine life as a writer. With numerous bylines and writing credits to her name – including penning the quirky guidebook "New England's Favorite Seafood Shacks" for The Countryman Press, and co-founding the NYC-on-a-shoestring daily newsletter the skint – Miz Eliz never sang a note outside of her own bathroom shower, aside from the requisite high school musical. However, throughout her tenure as an editor at a travel website, she grew increasingly dissatisfied with her choice of career path and sought solace in nurturing her lifelong passion for music as a hobby. She made the rounds on the jazz circuit in NYC, approaching bands after shows and asking for the chance to sing with them, even just at rehearsals. "It was depressing," she recalls, "because everyone would immediately ask me where I've sung before, and with whom, and even worse…what instrument I play, and when I had nothing to offer but passion and an untrained voice, I got politely laughed at and turned away." But her fiery spirit and resourceful nature wouldn't be cowed. In fact, the constant rejection ultimately sent her straight to acehardware.com, where she ordered a trusty Dubl-Handi washboard and drew upon her naturally percussive ear and inspiration from jug bands to become a "legit musician"…albeit self-taught, and with a little help from YouTube videos. She then both placed and answered ads on Craigslist, hoping to connect with others who shared her love of early jazz and blues and wouldn't scoff at her lack of experience.

Evan, meanwhile, was speeding toward the same destiny in a different way. Born and raised in NYC, with stints living in the Berkshires of MA, Evan started playing piano by ear at age 3 and has flirted with amateur musicianship his whole life. His love of performing began in his early education in Waldorf Schools and led him to major in theater and musical theater at the University of the Arts in Philadelphia. Upon returning to NYC with his soon-to-be wife Jennifer, he became a working actor earning his living doing theater, commercials, and production work on films. However, like Miz Eliz, Evan continued to be seduced by his passion for traditional jazz, band leading, and his love of playing stride-jazz piano whenever he got the chance. Without his knowledge, his wife placed an ad on Craigslist for him, seeking others looking to start a traditional jazz band. Says Evan, "It was pretty hilarious, getting responses to an ad I never placed…but so exciting to start discovering people who wanted to get together and jam." Early on in the process, he met a jazz guitarist and they got together every once in a while to play just for the fun of it. But it wasn't enough for Evan, who recalls that "it was enjoyable, but not life-changing…so I just kept placing ads inviting people to join us and answering other ads to see who else was out there in the community."

And then came the fateful day in 2007 when Evan and Elizabeth both answered the same Craigslist ad for an open jazz jam at an ad hoc rehearsal space in midtown Manhattan. Miz Eliz, who slipped out of her company holiday party at AOL Time Warner to be there, says that, "when Bibs and I met, it was like an instant musical connection," adding that, "we started trading stories of songs and singers we loved while growing up, naming our biggest influences and trying out tunes together…and it was like everyone else in the room just faded away while we geeked out." Evan knew the match was made in heaven when Miz Eliz asked him if he knew any Fats Waller. "I just started playing ‘Your Feet's Too Big' on the piano," he says, "and Elizabeth just joined in like we'd been singing that duet together for decades, which was pretty magical because it looked like no one else around us even knew that song." With both of them still working at their day jobs, and neither one dreaming of ever becoming a professional musician, they started getting together every couple of months to play music for their own enjoyment…until one day on a lark, they decided to take their piano-washboard-vocal show to an open-mic night at Banjo Jim's in the East Village. And fate – which had already started moving the Sardine pieces into place on the chessboard – stepped in that day again by sending Evan and Miz Eliz a tap dancer. Edwin "Fast Eddy" Francisco had stopped by Evan's house on an errand for a friend, and started tap dancing along while they were rehearsing…and just like that – the "percussion section" of tap-and-washboard was born.

Slowly the band began to take shape. Naming the band was easy, recalls Miz Eliz, who says that, "we knew we wanted the word ‘hot' in the name, to reflect the type of jazz we played, and so we literally just paired different words with hot to find a name that was fun, unusual, and memorable." Thanks to a tin of sardines in hot sauce Miz Eliz found at the local grocery store, the name fell into place in a snap. Over the first few years of the band's evolution, Miz Eliz recalls that "it was like the universe started sending the perfect Sardine-style performers into our orbit…guys who were deeply trained, accomplished musicians from hallowed institutions like Julliard, Berklee, and NYU Jazz, but who weren't afraid to – as we call it – get a little dirty and gritty with early American jazz." In time, the core Sardine cast of characters expanded to include Jason Prover (trumpet), Alex Raderman (percussion), Nick Myers (clarinet/saxophone), and Evan Crane (upright bass/sousaphone). And in 2011, after playing mostly small venues and free gigs for friends, an unexpected break landed in their lap. "We got an anonymous email inquiry in late June from someone seeking a jazz band that performs songs in French for a last minute gig on the upcoming Bastille Day, and we sent song samples and whatever rag-tag video clips we had on hand," says Evan. "Little did we know, the gig was Midsummer Night's Swing at Lincoln Center…and we got it." After bringing the house down for the 6,000+ music lovers in the audience that day, the Sardines earned an instant fan base in NYC, and more high profile gigs started rolling in.

The marriage of early-American jazz with the mischievous twist of French culture is a reflection of Bibs' and Miz Elizabeth's musical partnership. Parisian-born Miz Eliz sings eloquently and effortlessly in both French and English – and sometimes in Mandarin, just for fun ("Chinatown, My Chinatown" –Jerome/ Schwartz, 1910) – and also writes original songs in both languages.

The Hot Sardines have sold out 15 straight shows during their residency at New York's famed Joe's Pub, and showcased their versatility by performing to eager, hungry audiences at venues as diverse as the ultra-swank Top of the Standard (Boom Boom Room), the internationally-known Montreal Jazz Festival, the playfully-naughty underground speakeasy experience Shanghai Mermaid, and Symphony Hall in Boston, where they recently performed to sold out audiences in collaboration with the Boston Pops.

Both Evan and Miz Elizabeth attribute the Sardines' accessible and arresting style to the more modern cultural influences that enrich the core early-jazz foundation that originally brought them together. Says Evan, "Nothing is sacred…everything from The Muppets to Bugs Bunny and from Harry Connick, Jr. to James Brown and Louis Prima has infiltrated our music and the way we interpret and perform songs." 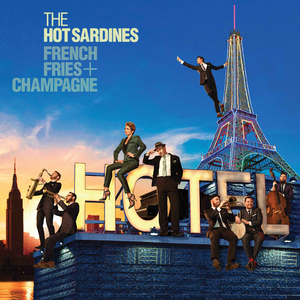 Formed by bandleader Evan "Bibs" Palazzo and lead singer "Miz Elizabeth" Bougerol, The Hot Sardines have released their sophomore studio album, French Fries & Champagne on Universal Music Classics. The record comes on the heels of their critically lauded self-titled debut album, which was named one of iTunes' best jazz albums of 2014 and spent more than a year on the Billboard Jazz Chart, debuting in the top 10 alongside Michael Bublé and Tony Bennett & Lady Gaga.