"Exceptional, entrancing, fun!..Her hand stretch is frankly not those of a Rachmaninov, but the rhythm and drive she gives to all her pieces can't be denied." – Harry Rolnick, (ConcertoNet.com)

"Bold, dynamic, magnificent!... Her magnificent interpretation commenced with a delicacy that made the flesh creep, and then it ignited and built to an immense power which reminded me of those unforgettable Horowitz recordings and concert performances from the 1960s and 1970s." – Harris Goldsmith, (New York Concert Review)

"..one of a new breed of self-sufficient young classical musicians...hands of great skill and power, electric flair and colorful musicality." - Jon Sobel, (BlogCritics.com)

Tania Stavreva is recognized as one of the most versatile young artists of her generation, renowned internationally for having "some of the most precise fingering of any of the twenty-something generation of pianists, bar none" (Mark Greenfest, SoundWordSight Arts Magazine), for her "superior technical abilities", "unlimited virtuosity", "personal sensitivity difficult to find elsewhere", and "huge dynamic range" combined with "demanding and diversified programs". Her "masterfully delivered" (San Francisco Chronicle) performance of the "White Lies for Lomax" (Winner of the 3rd Van Cliburn American Composers International Competition) by Mason Bates, released on Innova Recordings "is a stunning display of intricate blues playing and a highlight of the recording" (Karl Ackermann, All About Jazz CD Review), where Ms. Stavreva is among artists such as the Chicago Symphony Orchestra.

Tania Stavreva made her New York recital debut at Weill Recital Hall at Carnegie Hall in April 2009. She returned at Carnegie Hall in June 2016, this time on the main stage Stern Auditorium/Perelman Stage, giving the world premiere of "The Caged Bird Sings" by Mason Bates. She has performed also at many other top venues including Lincoln Center, Kaufman Center, Symphony Space, Jazz at Lincoln Center, Kosciusko Foundation Auditorium, Steinway Hall, Embassy of Bulgaria in New York, and the CSV Cultural Center where she was featured live on NY1 News by NBC reporter Asa Aarons. She has performed also at the GRAMMY Museum Theater, Clive Davis Auditorium in Los Angeles, Isabella Stewart Gardner Museum, Sanders Theater at Harvard University and the French Cultural Center in Boston, The National Ethnographic Museum in Bulgaria, Radio Plovdiv - Bulgarian National Radio Concert Hall, Cathedral San Lorenzo in Italy, Sala dei Notari (Italy), 1901 Arts Club in London, UK and the Ruinekerk in The Netherlands. In January 2013 her sold out Chicago recital debut was broadcast live on WFMT 98.7. She has been featured also on CBS New York, BBC Music Magazine, Keyboard Magazine, KUSC 91.5, ABC7 and Musical America. On June 12th, 2012 she was invited to perform at the Miles Davis/Edith Piaf Commemorative USPS Stamp Dedication Ceremony at the Rubin Museum of Art in New York where Ms. Stavreva was featured on CNN and shared the stage with the legendary bassist Ron Carter, the Miles Davis Family, Grammy-award winning songwriter Mike Stoller and legendary music producer George Avakian (Columbia Records).

In July 2011 Tania Stavreva performed for a first time body painted, connecting the music of Erik Satie to the work by artist Danny Setiawan. The multimedia collaboration was immediately featured on NY1 News TV, New York Daily News and Time Out NY. On May 10th, 2012 Ms. Stavreva collaborated with the internationally-acclaimed body painter and artist Derrick Little (Madonna, Shakira) at Galapagos Art Space in New York on another multimedia project titled Rhythmic Movement Multimedia. This time live music and live body painting were connected through abstract music-color synesthesia. In 2012 Tania Stavreva appeared on Off-Off Broadway with The Onomatopoeia Theatre Cmopany in William Shakespeare's The Tempest​.

Tania Stavreva is an active participant at many outreach programs and fundraising campaigns, supporting with her music institutions such as Dana Faber Cancer Institute, NYU Hospital, Los Angeles Children's Hospital, Centers for Alzheimer Care and many others. She is a graduate of the National Music School "Dobrin Petkov" in Bulgaria, where she studied with renown pedagogue Rositsa Ivancheva and also a graduate of the Boston Conservatory, where she was a full scholarship recipient and the winner of many competitions. She has been on the piano faculty of the Boston International Summer Music Festival "Youth & Muse", Piano School of NYC, LIC Academy of Music and the Page Music Lesson Center where she was also the director and founder of the Page Music Piano Performance Program. Tania Stavreva is a member of the Grammys (NARAS) as well as ASCAP and the American Federation of Musicians. 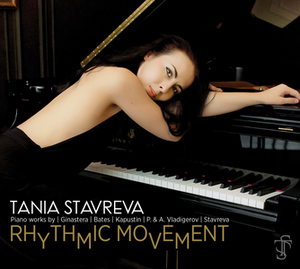 Rhythmic Movement is Tania Stavreva's official debut album, to be released, Jan. 7th, 2017. Although a classical album, it is very modern with a jazzy flavor. The album includes works written by composers from three continents and Stavreva. The music on the album hasa lot of excitement and rhythmic, melodic and dynamic energy, which gives it a very youthful feel, reflecting Stavreva's spirit and current state of mind; where she is in her life as an artist in the present moment. She wanted to be as honest as possible with her audience about that. That's why Rhythmic Movement is like a power of bright colors that dance with the music and bring joy, excitement and positive energy. Stavreva currently likes surrounding herself with music that brings this into her life and that by performing the music - she can give this to people…to her audience.