Steve Reich was recently called  "our greatest living composer" (The New York Times), "America's greatest living composer." (The Village VOICE), "...the most original musical thinker of our time" (The New Yorker) and "...among the great composers of the century" (The New York Times).. From his early taped speech pieces It's Gonna Rain (1965) and Come Out (1966) to his and video artist Beryl Korot's digital video opera Three Tales (2002), Mr. Reich's path has embraced not only aspects of Western Classical music, but the structures, harmonies, and rhythms of non-Western and American vernacular music, particularly jazz. "There's just a handful of living composers who can legitimately claim to have altered the direction of musical history and Steve Reich is one of them," states The Guardian (London).

In April 2009 Steve Reich was awarded the Pulitzer prize in Music for his composition 'Double Sextet'.

In October 2006 in Tokyo, Mr. Reich was awarded the Preamium Imperial award in Music. This important international award is in areas in the arts not covered by the Nobel Prize. Former winners of the prize in various fields include Pierre Boulez, Lucian Berio, Gyorgy Ligeti, Willem de Kooning, Jasper Johns, Richard Serra and Stephen Sondheim.

In May 2007 Mr. Reich was awarded The Polar Prize from the Royal Swedish Academy of music. The prize was presented by His Majesty King Carl XVI Gustaf of Sweden. The Swedish Academy said: "...Steve Reich has transferred questions of faith, society and philosophy into a hypnotic sounding music that has inspired musicians and composers of all genres." Former winners of the Polar Prize have included Pierre Boulez, Bob Dylan, Gyorgi Ligeti and Sir Paul McCartney.

In December 2006 Mr. Reich was awarded membership in the Franz Liszt Academy in Budapest and in April 2007 he was awarded the Chubb Fellowship at Yale University. In May 2008 he was elected to the Royal Swedish Academy of Music.

Born in New York and raised there and in California, Mr. Reich graduated with honors in philosophy from Cornell University in 1957. For the next two years, he studied composition with Hall Overton, and from 1958 to 1961 he studied at the Juilliard School of Music with William Bergsma and Vincent Persichetti. Mr. Reich received his M.A. in Music from Mills College in 1963, where he worked with Luciano Berio and Darius Milhaud.

During the summer of 1970, with the help of a grant from the Institute for International Education, Mr. Reich studied drumming at the Institute for African Studies at the University of Ghana in Accra. In 1973 and 1974 he studied Balinese Gamelan Semar Pegulingan and Gamelan Gambang at the American Society for Eastern Arts in Seattle and Berkeley, California. From 1976 to 1977 he studied the traditional forms of cantillation (chanting) of the Hebrew scriptures in New York and Jerusalem.

In 1966 Steve Reich founded his own ensemble of three musicians, which rapidly grew to 18 members or more. Since 1971, Steve Reich and Musicians have frequently toured the world, and have the distinction of performing to sold-out houses at venues as diverse as Carnegie Hall and the Bottom Line Cabaret.

Mr. Reich's 1988 piece, Different Trains, marked a new compositional method, rooted in It's Gonna Rain and Come Out, in which speech recordings generate the musical material for musical instruments. The New York Times hailed Different Trains as "a work of such astonishing originality that breakthrough seems the only possible description....possesses an absolutely harrowing emotional impact." In 1990, Mr. Reich received a Grammy Award for Best Contemporary Composition for Different Trains as recorded by the Kronos Quartet on the Nonesuch label.

In June 1997, in celebration of Mr. Reich's 60th birthday, Nonesuch released a 10-CD retrospective box set of Mr. Reich's compositions, featuring several newly-recorded and re-mastered works. He won a second Grammy award in 1999 for his piece Music for 18 Musicians, also on the Nonesuch label. In July 1999 a major retrospective of Mr. Reich's work was presented by the Lincoln Center Festival. Earlier, in 1988, the South Bank Centre in London, mounted a similar series of retrospective concerts.

In 2000 he was awarded the Schuman Prize from Columbia University, the Montgomery Fellowship from Dartmouth College, the Regent's Lectureship at the University of California at Berkeley, an honorary doctorate from the California Institute of the Arts and was named Composer of the Year by Musical America magazine.

The Cave, Steve Reich and Beryl Korot's music theater video piece exploring the Biblical story of Abraham, Sarah, Hagar, Ishmael and Isaac, was hailed by Time Magazine as "a fascinating glimpse of what opera might be like in the 21st century." Of the Chicago premiere, John von Rhein of the Chicago Tribune wrote, "The techniques embraced by this work have the potential to enrich opera as living art a thousandfold....The Cave impresses, ultimately, as a powerful and imaginative work of high-tech music theater that brings the troubled present into resonant dialogue with the ancient past, and invites all of us to consider anew our shared cultural heritage."

Three Tales, a three-part digital documentary video opera, is a second collaborative work by Steve Reich and Beryl Korot about three well known events from the twentieth century, reflecting on the growth and implications of technology in the 20th century: Hindenburg, on the crash of the German zeppelin in New Jersey in 1937; Bikini, on the Atom bomb tests at Bikini atoll in 1946-1954; and Dolly, the sheep cloned in 1997, on the issues of genetic engineering and robotics. Three Tales is a three act music theater work in which historical film and video footage, video taped interviews, photographs, text, and specially constructed stills are recreated on computer, transferred to video tape and projected on one large screen. Musicians and singers take their places on stage along with the screen, presenting the debate about the physical, ethical and religious nature of technological development. Three Tales was premiered at the Vienna Festival in 2002 and subsequently toured all over Europe, America, Australia and Hong Kong. Nonesuch is releasing a DVD/CD of the piece in fall 2003.

In 1994 Steve Reich was elected to the American Academy of Arts and Letters, to the Bavarian Academy of Fine Arts in 1995, and, in 1999, awarded Commandeur de l'ordre des Arts et Lettres. 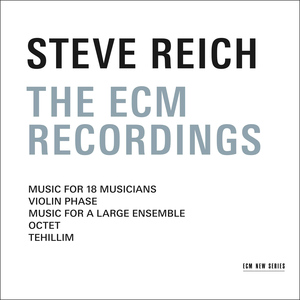 Steve Reich has been described by The Guardian as one of "a handful of living composers who can legitimately claim to have altered the direction of musical history" and as "the greatest musical thinker of our time" by The New Yorker.  Reich celebrates his 80th birthday on October 3, and The ECM Recordings brings together the landmark albums Music for 18 Musicians, Music for a Large Ensemble/Violin Phase/Octet and Tehillim in a limited edition set to mark the occasion. Originally released in 1978, 1980 and 1982, each of these recordings had a decisive influence which continues to reverberate across musical idioms. The 3-CD box set includes a 44-page booklet with original liner notes by Steve Reich, a new essay by Paul Griffiths, and session photography by Deborah Feingold and Barbara Klemm.