Sons Of Kemet are born of many vital elements – including a name that nods to ancient Egyptian culture, and a line-up that comprises some of the most progressive 21st-century talents in British jazz and beyond. Band-leader, composer and sax and clarinet don Shabaka Hutchings (himself named after a Nubian pharaoh-philosopher) brings together his fiery vision alongside London-based bandmates Tom Skinner and Seb Rochford (forming a dynamo duo on drums here) and latest addition Theon Cross (taking over from Oren Marshall on tuba).

These collaborative players have previously won major praise in celebrated acts such as Polar Bear, Hello Skinny, Melt Yourself Down, Mulatu Astatke and the Heliocentrics, and Sun Ra's Arkestra. Yet there's still nothing quite like the ‘supergroup' sound of Sons Of Kemet: eloquent, fierce, explosively funky – and thrillingly out-there.

‘I see Sons Of Kemet as a group that's free to explore even more areas,' smiles the genial 31-year-old Hutchings. ‘The music is driven by the band's synergy, but it could go anywhere, and we've played everywhere from sit-down art venues to sweaty nightclubs and international festivals; we're not forced into one direction. We can let our musicality take on a life of its own. When we play live, we know what the end result is: everyone in hysteria. But how we get there is anyone's guess.'

Originally formed in May 2011, Sons Of Kemet had already forged a rep for incendiary live sets by the time their debut album, Burn, was released in September 2013. That assured collection inspired passionate props across the board, from DJ/music connoisseur Gilles Peterson (who included Burn in his Worldwide Awards shortlist) to The Arts Desk (who pronounced it Album Of The Year), iTunes Best Of Jazz, and The Quietus. The band also scooped the MOBO Best Jazz trophy that year, which remains one of Hutchings's proudest achievements: ‘It felt like lots and lots of work had actually paid off,' he says, adding wryly: ‘Actually, I see Burn as quite a restrained album.'

Hutchings regards Sons Of Kemet's hotly anticipated second album, Lest We Forget What We Came Here To Do, as a vivid continuation of their debut work's themes, rather than a complete departure. He also describes the latest collection as ‘a meditation on the Caribbean diaspora in Britain'.

‘The realisation dawned after I'd started writing these tunes,' he explains. ‘I was thinking of my grandmother's generation from the Caribbean, who came here to work incredibly hard, and also what it means to be a black person in Britain now, especially a generation of youth experiencing high unemployment, and those elements of society who are not always easy to see.'

A pivotal track on Lest We Forget… is the ‘earthy and ceremonial' Afrofuturism, which takes the band's explorations of Caribbean roots into new realms:

‘The bass rhythm on that track is based on a traditional Barbadian style called tuk, with a bass and snare drum; it's similar to fife music from New Orleans, but there are also links to West African roots, and Western military band music. Barbados is quite a small island, and before the emancipation of slaves, there was nowhere for people to privately retain African cultural traits or beliefs – so they were finding ways to keep those elements in "acceptable" forms of music. I think it could be a Caribbean thing: to express something with deep meaning about society, that might come from having experienced trauma, within a form that might feel quite light-hearted. You get the same thing in calypso music.'

The expansive roots of Lest We Forget… also reflect Hutchings's personal history. ‘I do see this as my baby,' he admits. He was raised in Birmingham, but spent his years between the ages of 6 and 16 in Barbados, where he first picked up an instrument – in his school's recorder group, aged 9. ‘I was quite staid,' he laughs. ‘I thought I was going to be in an orchestra; it was all about classical and calypso bands for me. When I was in the Caribbean, kids my age saw jazz as music for old people or rich people.'

That perspective shifted radically back in Birmingham, when Hutchings befriended alto-sax and MC talent Soweto Kinch, at the latter's weekly live jam sessions. ‘It was incredible to hear jazz being played live and mixed with hip hop by someone who was close to me and cool,' he recalls. Hutchings began to delve into the jazz music catalogue at Birmingham library, while constantly sharpening his own skills, winning a place to study clarinet and then saxophone at London's prestigious Guildhall School Of Music And Drama.

Just as Burn blazed through unpredictable atmospheres and effects, Hutchings incorporates far-reaching influences on Lest We Forget… These range from his relationship with classical concepts (Mo' Wiser), to literary inspirations on tracks such as In The Castle Of My Skin (named after Barbadian author George Lamming's 1953 novel about post-colonial identity) and The Long Night Of Octavia Butler, in homage to the award-winning African-American sci-fi writer. ‘When I read books I love, they kind of put a trance over me, and Octavia Butler particularly has that effect,' says Hutchings. ‘I was thinking about her 1998 novel Parable Of The Talents; it presents a futuristic vision that is just close enough to normality to make you unsettled.'

Meanwhile, the album's exceptionally resonant opening track reflects an unsettling modern reality; In Memory Of Samir Awad was written to commemorate a Palestinian teen killed by Israeli forces as he fled their gunfire in 2013. ‘We're trying to immortalise an everyday youth, and an occurrence that is everyday in that region of the world, and to say that it is significant,' says Huchings. ‘I wanted an intensity that continued throughout the piece. It's a taut existence, and the low notes symbolise the bombings or eruptions in "normal" life under occupation.'

The album's overall ‘restless and trancey' energy is definitely a collective achievement, and Hutchings is full of enthusiasm for his bandmates' powerful and intuitive dynamics. ‘All of the other members are composers of music in their own right, and I think that's really important,' he says. ‘I can give them the bare roots, and they're thinking about the balance, how the grand structure of the piece hangs. Everyone's focused, and I can dig into my own role.'

Sons Of Kemet have seeped this latest material into their irrepressible live sets over the past year and a half. Now it comes into its own, as Lest We Forget What We Came Here To Do – and the possibilities are still exhilarating:

‘On some level, our duty is to give the audience what they want,' says Hutchings. ‘On another, it's to prise open those expectations and put something else in there – and on another level, it's to forget all of that, and just create euphoria.'

Shabaka Hutchings, a saxophonist, band leader and composer, part of London's community of younger jazz musicians as well as the city's thriving improvised music scene. For Hutchings, composition is a chronicle of the zeitgeist inhabited by a composer; an exposition of his or her search for meaning and the structuring of experiences in aid of recognising this meaning when it appears.

As part of the Caribbean diaspora, he sees his role as that of pushing the boundaries of what musical elements are considered to be Caribbean. Constantly evaluating the nature of his relationship with musical material and tradition, he describes his attempts at composition as wrestling matches with questions of where and how the Caribbean can be encoded, and what happens when it is exposed to the western classical music cannon.

Hutchings was born in 1984 in London. He moved to Barbados at the age of six, began studying classical clarinet aged nine and remained until sixteen. Shabaka's primary project is the group Sons of Kemet, which won the 2013 MOBO Award for Jazz Act of the Year. In June 2014 Shabaka was invited to join the Sun Ra Arkestra, performing with them and recording a session for BBC Radio 3. He has performed and recorded with Courtney Pine's Jazz Warriors, Mulatu Astatke and the Heliocentrics, Polar Bear and Soweto Kinch. Some of the many notable musicians he has shared the stage with include Jack DeJohnette, Charlie Haden and the Liberation Music Orchestra, Louis Moholo, Evan Parker, King Sunny Ade and Orlando Julius to name a few.

In 2010 Shabaka was granted the title of BBC Radio 3 New Generation Artist which allowed him to undertake numerous commissions, as well as broadcast performances on radio. These included performances with Julian Joseph, the BBC Big Band, and the BBC National Orchestra of Wales (with whom he performed the Copland Clarinet Concerto in the Wales Millennium Centre). In 2012 he was commissioned to write a piece for the BBC Concert Orchestra which included members his own group (Sons of Kemet) and electronic musicians Leafcutter John and Jason Singh. This concert was received to critical praise at the South Bank's Queen Elizabeth Hall. In July 2013 Shabaka was commissioned by Leasowes Bank Music Festival to write a piece for clarinet and string quartet. He performed this piece with the Ligeti String Quartet to rave reviews (the Birmingham Post giving the concert 5 stars). Shabaka was nominated for Jazz Musician of the Year 2013 in the Parliamentary Jazz Awards. Shabaka was a recipient of the Paul Hamlyn Composer Award 2014 and the winner of the Jazz FM Instrumentalist of the Year 2015. Earlier in 2015, Shabaka also received a commission from the London Sinfonietta to write a 'note to the new government' and was Associate Artist for the Spittalfields Summer Festival. The second Sons of Kemet album, 'Lest we forget what we came here to do' was released in September 2015 on NAIM and the trio project, The Comet is Coming, featuring Shabaka, Dan Leavers, and Max Hallett, released it's first EP on Leaf Label in october 2015.
.

Your Queen Is A Reptile 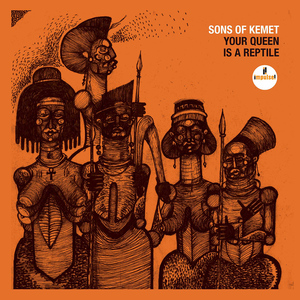 Shabaka Hutchings, saxophonist, band leader and composer, has signed to impulse! records under the umbrella of Verve Label Group. One of his groups Sons of Kemet will release their third album Your Queen Is A Reptile on impulse! on March 30, 2018. To celebrate this signing and the label returning to the United States under VLG, impulse! will present a showcase at Winter Jazzfest on January 12 at Le Poisson Rouge, featuring Sons of Kemet and pianist Sullivan Fortner.

Your Queen Is A Reptile
https://www.sonsofkemet.com/