Theodore Walter Rollins was born on September 7, 1930 in New York City. He grew up in Harlem not far from the Savoy Ballroom, the Apollo Theatre, and the doorstep of his idol, Coleman Hawkins. After early discovery of Fats Waller and Louis Armstrong, he started out on alto saxophone, inspired by Louis Jordan. At the age of sixteen, he switched to tenor, trying to emulate Hawkins. He also fell under the spell of the musical revolution that surrounded him, Bebop.

He began to follow Charlie Parker, and soon came under the wing of Thelonious Monk, who became his musical mentor and guru. Living in Sugar Hill, his neighborhood musical peers included Jackie McLean, Kenny Drew and Art Taylor, but it was young Sonny who was first out of the pack, working and recording with Babs Gonzales, J.J. Johnson, Bud Powell and Miles Davis before he turned twenty.

"Of course, these people are there to be called on because I think I represent them in a way," Rollins said recently of his peers and mentors. "They're not here now so I feel like I'm sort of representing all of them, all of the guys. Remember, I'm one of the last guys left, as I'm constantly being told, so I feel a holy obligation sometimes to evoke these people."

In the early fifties, he established a reputation first among musicians, then the public, as the most brash and creative young tenor on the scene, through his work with Miles, Monk, and the MJQ.

Miles Davis was an early Sonny Rollins fan and in his autobiography wrote that he "began to hang out with Sonny Rollins and his Sugar Hill Harlem crowd…anyway, Sonny had a big reputation among a lot of the younger musicians in Harlem. People loved Sonny Rollins up in Harlem and everywhere else. He was a legend, almost a god to a lot of the younger musicians. Some thought he was playing the saxophone on the level of Bird. I know one thing–he was close. He was an aggressive, innovative player who always had fresh musical ideas. I loved him back then as a player and he could also write his ass off…"

Sonny moved to Chicago for a few years to remove himself from the surrounding elements of negativity around the Jazz scene. He reemerged at the end of 1955 as a member of the Clifford Brown-Max Roach Quintet, with an even more authoritative presence. His trademarks became a caustic, often humorous style of melodic invention, a command of everything from the most arcane ballads to calypsos, and an overriding logic in his playing that found him hailed for models of thematic improvisation.

It was during this time that Sonny acquired a nickname,"Newk." As Miles Davis explains in his autobiography: "Sonny had just got back from playing a gig out in Chicago. He knew Bird, and Bird really liked Sonny, or "Newk" as we called him, because he looked like the Brooklyn Dodgers' pitcher Don Newcombe. One day, me and Sonny were in a cab…when the white cabdriver turned around and looked at Sonny and said, `Damn, you're Don Newcombe!" Man, the guy was totally excited. I was amazed, because I hadn't thought about it before. We just put that cabdriver on something terrible. Sonny started talking about what kind of pitches he was going to throw Stan Musial, the great hitter for the St. Louis Cardinals, that evening…"

In 1956, Sonny began recording the first of a series of landmark recordings issued under his own name: Valse Hot introduced the practice, now common, of playing bop in 3/4 meter; St. Thomasinitiated his explorations of calypso patterns; and Blue 7 was hailed by Gunther Schuller as demonstrating a new manner of "thematic improvisation," in which the soloist develops motifs extracted from his theme. Way Out West (1957), Rollins's first album using a trio of saxophone, double bass, and drums, offered a solution to his longstanding difficulties with incompatible pianists, and exemplified his witty ability to improvise on hackneyed material (Wagon Wheels, I'm an Old Cowhand). It Could Happen to You (also 1957) was the first in a long series of unaccompanied solo recordings, and The Freedom Suite (1958) foreshadowed the political stances taken in jazz in the 1960s. During the years 1956 to 1958 Rollins was widely regarded as the most talented and innovative tenor saxophonist in jazz.

Rollins's first examples of the unaccompanied solo playing that would become a specialty also appeared in this period; yet the perpetually dissatisfied saxophonist questioned the acclaim his music was attracting, and between 1959 and late `61 withdrew from public performance.

Sonny remembers that he took his leave of absence from the scene because "I was getting very famous at the time and I felt I needed to brush up on various aspects of my craft. I felt I was getting too much, too soon, so I said, wait a minute, I'm going to do it my way. I wasn't going to let people push me out there, so I could fall down. I wanted to get myself together, on my own. I used to practice on the Bridge, the Williamsburg Bridge because I was living on the Lower East Side at the time."

When he returned to action in early `62, his first recording was appropriately titled The Bridge. By the mid 60′s, his live sets became grand, marathon stream-of-consciousness solos where he would call forth melodies from his encyclopedic knowledge of popular songs, including startling segues and sometimes barely visiting one theme before surging into dazzling variations upon the next. Rollins was brilliant, yet restless. The period between 1962 and `66 saw him returning to action and striking productive relationships with Jim Hall, Don Cherry, Paul Bley, and his idol Hawkins, yet he grew dissatisfied with the music business once again and started yet another sabbatical in `66. "I was getting into eastern religions," he remembers. "I've always been my own man. I've always done, tried to do, what I wanted to do for myself. So these are things I wanted to do. I wanted to go on the Bridge. I wanted to get into religion. But also, the Jazz music business is always bad. It's never good. So that led me to stop playing in public for a while, again. During the second sabbatical, I worked in Japan a little bit, and went to India after that and spent a lot of time in a monastery. I resurfaced in the early 70s, and made my first record in `72. I took some time off to get myself together and I think it's a good thing for anybody to do."

In 1972, with the encouragement and support of his wife Lucille, who had become his business manager, Rollins returned to performing and recording, signing with Milestone and releasing Next Album. (Working at first with Orrin Keepnews, Sonny was by the early '80s producing his own Milestone sessions with Lucille.) His lengthy association with the Berkeley-based label produced two dozen albums in various settings – from his working groups to all-star ensembles (Tommy Flanagan, Jack DeJohnette, Stanley Clarke, Tony Williams); from a solo recital to tour recordings with the Milestone Jazzstars (Ron Carter, McCoy Tyner); in the studio and on the concert stage (Montreux, San Francisco, New York, Boston). Sonny was also the subject of a mid-'80s documentary by Robert Mugge entitled Saxophone Colossus; part of its soundtrack is available as G-Man.

He won his first performance Grammy for This Is What I Do (2000), and his second for 2004's Without a Song (The 9/11 Concert), in the Best Jazz Instrumental Solo category (for "Why Was I Born"). In addition, Sonny received a Lifetime Achievement Award from the National Academy of Recording Arts and Sciences in 2004.

In June 2006 Rollins was inducted into the Academy of Achievement – and gave a solo performance – at the International Achievement Summit in Los Angeles. The event was hosted by George Lucas and Steven Spielberg and attended by world leaders as well as distinguished figures in the arts and sciences.

Rollins was awarded the Austrian Cross of Honor for Science and Art, First Class, in November 2009. The award is one of Austria's highest honors, given to leading international figures for distinguished achievements. The only other American artists who have received this recognition are Frank Sinatra and Jessye Norman.

In 2010 on the eve of his 80th birthday, Sonny Rollins is one of 229 leaders in the sciences, social sciences, humanities, arts, business, and public affairs who have been elected members of the American Academy of Arts and Sciences. A center for independent policy research, the Academy is among the nation's oldest and most prestigious honorary societies and celebrates the 230th anniversary of its founding this year.

In August 2010, Rollins was named the Edward MacDowell Medalist, the first jazz composer to be so honored. The Medal has been awarded annually since 1960 to an individual who has made an outstanding contribution to his or her field.

Yet another major award was bestowed on Rollins on March 2, 2011, when he received the Medal of Arts from President Barack Obama in a White House ceremony. Rollins accepted the award, the nation's highest honor for artistic excellence, "on behalf of the gods of our music."

Since 2006, Rollins has been releasing his music on his own label, Doxy Records. The first Doxy album was Sonny, Please, Rollins's first studio recording since This Is What I Do. That was followed by the acclaimed Road Shows, vol. 1 (2008), the first in a planned series of recordings from Rollins's audio archives.

Mr. Rollins released Road Shows, vol. 2 in the fall of 2011. In addition to material recorded in Sapporo and Tokyo, Japan during an October 2010 tour, the recording contains several tracks from Sonny's September 2010 80th birthday concert in New York-including the historic and electrifying encounter with Ornette Coleman.

On December 3, 2011 Sonny Rollins was one of five 2011 Kennedy Center honorees, alongside actress Meryl Streep, singer Barbara Cook, singer/songwriter Neil Diamond and cellist Yo-Yo Ma.   Rollins said of the honor, "I am deeply appreciative of this great honor. In honoring me, the Kennedy Center honors jazz, America's classical music. For that, I am very grateful." 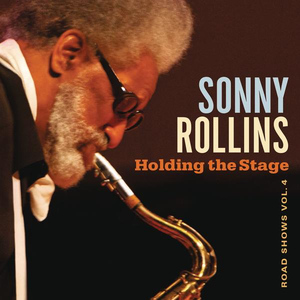 For his new album Holding the Stage: Road Shows, vol. 4, the great tenor saxophonist Sonny Rollins once again taps into his vast archives of his own concert recordings to compile superior performances for release in the acclaimed Road Shows series. The album encompasses some 33 years (1979-2012) yet coheres with all of the compelling logic and narrative force of an extended Sonny solo. Released by Doxy Records with Sony Music Masterworks - OKeh, this recording is truly a treasure chest that includes tunes Rollins has never before recorded and musical relationships previously undocumented. "This album consists of various periods of my career, with something for everybody," says Rollins. "It's who I am, and the music represents just about every aspect of what I do."