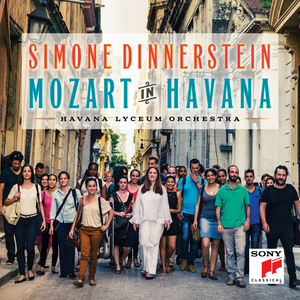 Orchestra Will Make First Trip to U.S. for Performances with Dinnerstein in June

Sony Classical will release acclaimed pianist Simone Dinnerstein's new album, Mozart in Havana, on April 21. The new album, recorded in Cuba, may be her most ambitious to date and is a testament to music's ability to cross all cultural and language barriers.For it, Dinnerstein has collaborated with the virtuosic Havana Lyceum Orchestra to perform Mozart's Piano Concerto Nos. 21 and 23. In June, the Orchestra will also make their American debut in a series of concerts, the first time an orchestra of this size has traveled to the U.S. from Cuba since the revolution.

In one sense, Mozart in Havana is a return to Dinnerstein's origins as a musician. Her connection with Cuba started early with Solomon Mikowsky, a Cuban émigré who became her piano teacher when she was nine. Mikowsky would tell stories of his childhood in Cuba and the country's many musical influences. Dinnerstein recalls, "I learned so much from Solomon, and one thing was that a musical culture is not something you have to be born to but something you can choose."

Over the last several decades, Mikowsky became an advocate of Cuba's rich culture and arts landscape. When he inaugurated the Encuentro de Jóvenes Pianistas (Meeting of Young Pianists) festival in Havana in 2013, he invited Dinnerstein to play. "Of course I accepted without hesitation and Havana turned out to be everything he had told me it would be," Dinnerstein explains, "a city profoundly different from any other I knew, with warm appreciative audiences who had a deep engagement with music."

Dinnerstein returned to the festival in 2015, this time to play a Mozart concerto with the Havana Lyceum Orchestra. Not knowing what to expect, she was deeply impressed. "They played with thoughtful sensitivity and sensual beauty, despite the fact that in some cases the materials they were using were inferior. It was clear that the sound they made came from inside them, not simply from their instruments."

Within a year she had returned to Havana's Oratorio San Felipe Neri to record with the Orchestra what would become Mozart in Havana. The recording was done over three long, sleepless nights using donated strings and recording equipment brought in by Grammy Award-winning producer Adam Abeshouse. His peerless expertise helped navigate the various challenges of the late-night city soundscape including stray dogs barking, a neighbor jackhammering on his roof and sparrows rustling in the eaves of the building.

Dinnestein recalls, "My enduring memory from those long overnight sessions is that whenever there was downtime the Orchestra would crowd into the production booth, listening to playbacks. Musicians would share headphones. The conductor, Jose Antonio Mendez Padron, sat among them and we would listen with a shared intensity. Everyone wanted the recording to capture the best playing they were capable of, and they would work as long and as hard as they could to realize that aspiration. That, too, was something that I found familiar from my time with Solomon Mikowsky all those years ago."

This summer, the Orchestra will make their U.S. debut in a series of concerts with Dinnerstein, including New York's Naumburg Bandshell on June 13, and The Clarice Smith Performing Arts Center at the University of Maryland on June 28 in College Park, where they will also be in residence at the National Orchestral Institute + Festival, June 25-28. Dinnerstein will also perform the repertoire with the National Symphony Orchestra on April 21 & 23 at the National Music Center in Costa Rica.

Dinnerstein is one of the most acclaimed pianists of her generation – called "an artist of true expressive force" by the Washington Post and "a throwback to such high priestesses of music as Wanda Landowska and Myra Hess" by Slate.She is also one of the most expansive, counting among her catalogue projects with singer-songwriter Tift Merritt, thereminist Pamelia Kurstin, jazz pianist Brad Mehldau and others.Simone Dinnerstein is a searching and inventive artist who is motivated by a desire to find the musical core of every work she approaches. The New York-based pianist gained an international following with the remarkable success of her recording of Bach's Goldberg Variations, which she independently raised the funds to record. Released in 2007 on Telarc, it ranked No. 1 on the U.S. Billboard Classical Chart in its first week of sales and was named to many "Best of 2007" lists, including those of The New York Times, Los Angeles Times and the New Yorker.

Dinnerstein has played concerts throughout the U.S. for the Piatigorsky Foundation, an organization dedicated to bringing classical music to non-traditional venues. She gave the first classical music performance in the Louisiana state prison system at the Avoyelles Correctional Center, and performed at the Maryland Correctional Institution for Women in a concert organized by the Baltimore Symphony Orchestra. Dedicated to her community, in 2009 Dinnerstein founded Neighborhood Classics, a concert series open to the public hosted by New York public schools, which raises funds for their music education programs.

Later this season, Dinnerstein will begin touring the premiere of a new concerto for piano and strings written for her by Philip Glass. Also, in the fall of 2017, Dinnerstein will premiere and begin touring her collaboration with choreographer Pam Tanowitz, New Work for Goldberg Variations. Arriving on the 10th anniversary of Dinnerstein's acclaimed recording, the work is a setting for piano and a sextet of female dancers.

José Antonio Méndez Padrón is the founding music director of the Havana Lyceum Orchestra. He has toured Canada, Spain, France, Austria, the U.S., Ecuador and Nicaragua, and five of his albums have received Cubadisco prizes in the past decade. Since 2011 he has been deputy director of the National Symphony Orchestra of Cuba.

Padrón is a graduate of the University of the Arts in Havana, Cuba, where he specialized in choral direction under María Felicia Pérez and orchestra direction under Jorge López Marín. He has taken advanced classes with important musical directors such as Jorge Rotter, Thomas Hengelbrock, Shalev Ad El and the master Ronald Zollman. In 2011, he studied at the Mozarteum University's Summer Academy with Peter Gülke and the soloists of Salzburg Chamber Orchestra.

About the Havana Lyceum Orchestra

The Havana Lyceum Orchestra was founded in 2009 in collaboration with the Mozart Lyceum of Havana, an institution co-sponsored by the Salzburg Mozarteum Foundation in Austria. It brings together students, recent graduates and professors from the University of the Arts, the National School of Music and the Amadeo Roldán Conservatory.

The Havana Lyceum Orchestra has quickly established itself as a central element of Cuba's musical life. The Orchestra has performed extensively in Cuba and abroad to widespread critical acclaim. In 2015 the Orchestra performed at Salzburg's annual Mozartewoche in collaboration with the celebrated Cuban flutist Niurka González during "Mozartewoche" (or Mozart Week) 2015. It records regularly in Cuba and has won a series of Cubadisco prizes for its work.