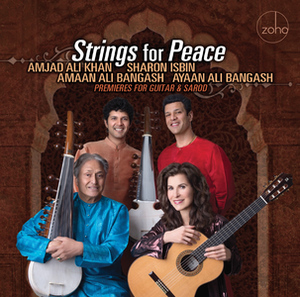 Grammy Award-winning guitarist Sharon Isbin's new recording, Strings for Peace, with sarod master, Amjad Ali Khan, and his virtuoso sons Amaan and Ayaan Ali Bangash, is a groundbreaking release steeped in the tradition of ragas and talas of North Indian classical music.  Available May 22, 2020 on the ZOHO label (ZM 202004), it was recorded in New York following a successful joint 2019 tour in India. Strings for Peace features four Khan compositions based on popular ragas specifically written and arranged for Sharon Isbin: By the Moon - Raga Behag, Love Avalanche - Raga Mishra Bhairav, Romancing Earth - Raga Pilu and Sacred Evening - Raga Yaman.  The four artists are joined on the tabla by Amit Kavthekar, a disciple of Indian drumming giants, Alla Rakha and his son Zakir Hussain. They will tour across the US in 20/21 beginning in Tanglewood and Caramoor festivals this July.