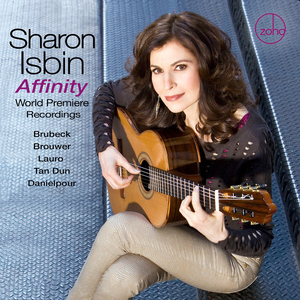 On this historic ZOHO release, legendary guitarist Sharon Isbin performs multi-faceted and virtuosic new works for guitar, written for her by four leading composers. From the Africa-influenced El Decameron Negro by iconic Cuban guitarist/composer Leo Brouwer, through the Chinese and Spanish-inspired Seven Desires for Guitar by Tan Dun, to Richard Danielpour's sensual song cycle Of Love and Longing (with multiple Grammy winner Isabel Leonard) and the  jazz and world music-influenced Affinity: Concerto for Guitar & Orchestra by Chris Brubeck with the Maryland Symphony Orchestra/Elizabeth Schulze, Sharon Isbin gives her inimitable imprint to, and vastly enriches major new repertoire for guitar. The four world premieres also include a two-guitar arrangement for her by Colin Davin of Antonio Lauro's Waltz #3 Natalia.   The recording will be available May 22, 2020 on the ZOHO label (ZM 202005).