Souvenirs of Spain and Italy 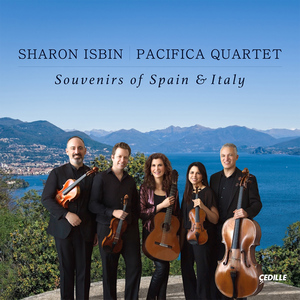 In their first collaboration on disc, the artists play works for guitar and strings by Castelnuovo-Tedesco, Vivaldi, and Boccherini

The Grammy Award-winning Pacifica Quartet and multiple Grammy-winning guitarist Sharon Isbin join forces for Souvenirs of Spain & Italy, an uncommon album of music for strings and guitar from the Baroque to the mid-20th century.

"It's really beautiful music with a tremendous amount of variety," Isbin says.

Seldom-Heard Gem - Castelnuovo-Tedesco's four-movement Quintet for Guitar and String Quartet, Op. 143, is a seldom-heard gem demanding virtuosity from every player. Written in 1950 for guitarist Andrés Segovia, it's "an urbane work, rich in vibrant themes and dialogues among individual lines," Kozinn writes. The album takes its title from the work's Spanish-influenced second movement, where the composer wrote "Souvenir d'Espagne" in the score.

Vivaldi's Concerto in D Major, RV 93, is the most popular of the chamber works he composed with the lute as solo voice. Pujol's arrangement for guitar and string trio reassigns Vivaldi's second violin part to the viola for a more balanced sound. Isbin's guitar work in the dreamlike, meditative Largo movement features her own Baroque ornamentation.

Luigi Boccherini's festive Quintet, G. 448, melds the emerging classical style of late 18th-century Vienna with hints of Spanish flamenco. Boccherini, a cellist, included a virtuosic part for the instrument. The work's celebrated finale is a lively Fandango, "a vigorous Spanish dance in which the guitar moves easily between refined detailing and hard-strumming flamenco effects," Kozinn writes. Castanets and tambourine, played by Eduardo Leando, add to the folkloric atmosphere.

Turina's La oración del torero, Op. 34, evokes the fervor of a matador's private prayer before entering the bullring. Written in 1925 for lute quartet, the piece was an immediate success in Spain. Turina wrote the string quartet edition in 1936 to popularize the piece beyond his native country.

Album's Aspen Origins - Isbin, "one of the best guitarists in the world" (Boston Globe), and the Pacifica, hailed as "nothing short of phenomenal" (The Telegraph), first performed together several years ago at the Aspen Music Festival, at Isbin's invitation.

"We hit it off to such an extent that we decided to tour together," the guitarist says in a video interview for Cedille Records. "I'm just amazed at how extraordinary they are as a quartet and as human beings."

Pacifica cellist and founding member Brandon Vamos says, "What I love about working with Sharon is her attention to detail, subtlety and nuance, rubato and timing, and her diligence and desire to get things just right."

Pacifica Quartet - In addition to their new recording with Isbin, the Pacifica's Cedille catalog of 11 albums includes collaborations with other leading instrumentalists such as clarinetist Anthony McGill, now principal clarinet of the New York Philharmonic; pianist Menahem Pressler of the Beaux Arts Trio; and violist Michael Tree of the Guarneri Quartet.

Formed in 1994, the Pacifica was awarded a 2006 Avery Fisher Career Grant and named "Ensemble of the Year" by Musical America in 2009. They earned the Grammy Award for Best Chamber Music Performance of 2008 for their album of Elliot Carter's Quartets Nos. 1 and 5 on Naxos. Formerly quartet-in-residence at the Metropolitan Museum of Art, they are currently quartet-in-residence and full-time faculty at Indiana University's Jacobs School of Music.  In 2017, the Pacifica Quartet was appointed to lead the Center for Advanced Quartet Studies at the Aspen Music Festival and School.  The quartet's website is pacificaquartet.com

Sharon Isbin - Isbin's discography of 30 albums includes three Grammy Award winners and a Latin Grammy nominee. Other honors include Germany's Echo Klassik award, Gramophone's Recording of the Year, and Guitar Player's Best Classical Guitarist award. The award-winning documentary Sharon Isbin: Troubadour was seen by millions on public television. She is founding director of the Juilliard School's guitar department and leads the guitar program at the Aspen Music Festival and School. Winner of the Toronto, Munich, and Madrid competitions, she gives up to 100 performances each season. Her website is sharonisbin.com.