Producer, composer, keyboardist and vocalist, Sergio Mendes' influence on the music industry has spanned five decades and continues to evolve through new collaborations and mediums.

One of the most internationally successful Brazilian artists of all time, Mendes has recorded more than 35 albums, many of which went gold or platinum, and he's a three-time Grammy® Award winner.

Once again, Sergio Mendes was responsible for bringing the distinctive rhythms of Brazil and his music to a global audience as the executive music producer for the animated feature sequel Rio 2, which has grossed nearly half a billion dollars worldwide. The Rio 2 soundtrack includes musicians Janelle Monáe, Bruno Mars, and Kristin Chenoweth, among many others. The film is directed by Carlos Saldanha who directed the original 2011 film, in which Mendes was also the executive music producer who contributed five songs. The soundtrack, Rio: Music from the Motion Picture, featured re-recorded versions of his hits "Mas Que Nada" and "Valsa Carioca."  He also received his first Oscar® nomination in the music category for "Real In Rio."

Mendes started his career with 1961's Dance Moderno and the groups Bossa Rio and the Sergio Mendes Trio.  From the mid-1960s to the late '70s, Mendes established his legendary status by taking numerous albums and singles to the top of the charts.  But it was Sergio Mendes and Brasil '66 which sparked global stardom.  Performing "The Look of Love" at the 1968 Oscars, their version went top 10, quickly followed by the hits "The Fool on the Hill" and "Scarborough Fair."  Enjoying immense popularity, Mendes added soul and funk to his jazz and pop, but always with a Brazilian rhythm.  His earlier single, "Mas Que Nada," marked the first time that a song sung entirely in Portuguese hit Billboard's Pop chart in the U.S.  Mendes' signature mix of bossa nova/samba and his distinctive pop instrumentation features melodies with distinct sophistication and alluring sexiness that ultimately came to define Brazilian music for many music enthusiasts around the world.

In the '80s, he scored with the No. 1 Adult Contemporary and pop top-10 hit "Never Gonna Let You Go."  And in 1992 Mendes was awarded his first Grammy® in the category of Best World Music for his album Brasileiro.  Since then, Mendes has gone on to be honored with two Latin Grammy® awards for Best Brazilian Record, Timeless (2006) and Bom Tempo (2010), which was also nominated for a 2010 Grammy® award.

Mendes' innovation and versatility has enabled him to collaborate with a wide a range of artists. In 2006, his Timeless CD was a collaboration with contemporary pop, rock, urban and hip-hop artists, including Justin Timberlake, John Legend, and Black Eyed Peas-with a re-recording of his early gem "Mas Que Nada" alongside Gracinha Leporace, Mendes' wife.  2008's Encanto featured neo-soulster Ledisi and Spanish-language favorite Juanes.

In 2011, Mendes released his 39th album, Celebration: A Musical Journey, which represented his 50 years as a recording artist and included classics from his career as well as new recordings with Ivete Sangalo and Siedah Garrett, among them a remake of "The Fool on the Hill." He also performed the classic at the 2011 MusiCares Gala Honoring Sir Paul McCartney.

Mendes' iconic album: HERB ALPERT PRESENTS SERGIO MENDES & BRASIL '66 was also inducted into the Grammy® Hall of Fame, joining Bruce Springsteen's Born In The U.S.A., Dr. Martin Luther King Jr's "I Have A Dream" speech, the Rolling Stones' Exile On Main St., and others in the 2012 class of historically significant recordings.

Mendes and his cool factor continue to be ever present. 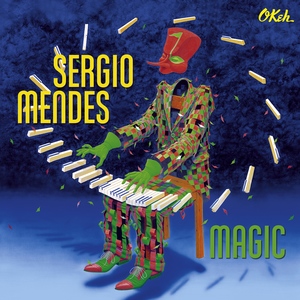 "The sound of Brazilian musician Sergio Mendes has been a summer soundtrack for generations of listeners." - NPR

In a career that spans more than half a century, Sérgio Mendes is an old hand at creating a unique sonic blend that electrifies a mass global audience. His knack for delivering hit after hit has made him the most successful Brazilian musician of his time. A grand conceptualizer, his well-polished talents as a pianist, composer, bandleader, vocalist and producer make him a truly singular artist. With Magic, his debut recording for the storied OKeh label, he triumphs once again, delivering a timely update on the infectious mix of Brazilian rhythms and contemporary styles from his homeland, the U.S. and elsewhere that make the Mendessound instantly recognizable.