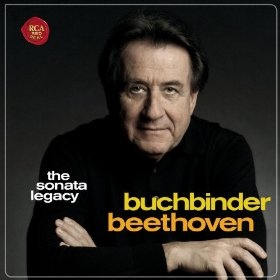 Pianist Rudolf Buchbinder, whose interpretation of Beethoven has been described as "channeling the music from some cosmic beyond" (New York Times), will perform at Lincoln Center's Mostly Mozart Festival for the first time in the festival's history at 8pm on Tuesday, August 14 and 8pm on Wednesday, August 15, 2012 at Avery Fisher Hall, in Beethoven's Piano Concerto No. 3 with Osmo Vänskä and the Mostly Mozart Festival Orchestra. In addition, New York audiences will have the unusual opportunity to hear Buchbinder in Beethoven's Sonatas on the same evening – he will give pre-concert recitals at 7pm on both evenings on the stage of Avery Fisher Hall, featuring Beethoven's Sonata No. 23 ("Appassionata") on August 14 and Sonata No. 8 ("Pathétique") on August 15. The concerts also include Mozart's Symphony No. 32 and Schubert's Symphony in C Major ("Great").

Coinciding with Buchbinder's Mostly Mozart concerts, on August 7 Sony Classical will release his recording of Beethoven's 32 Piano Sonatas in a 9-CD set entitled The Sonata Legacy. The Sonata Legacy is Buchbinder's second recording of Beethoven's complete sonatas, and is a live recording of his performance of the entire sonata cycle in seven concerts at the Dresden Semperoper between September 2010 and March 2011. Now 65, Buchbinder's first recording of the complete sonatas was released thirty years ago in 1982 on the Teldec label, when he was 35. The Sonata Legacy was released in Europe in 2011 and sold out its first pressing, ranking on the Austrian Pop Charts and in the Top 10 on the German Classical Charts. Buchbinder won the prestigious ECHO Klassik Award for Instrumentalist of the Year for the box set, awarded by the German Phono Akademie.

Buchbinder is enjoying a banner year in his lifelong passion for the music of Beethoven. In January, his live performance (as pianist and conductor) of all five of Beethoven's Piano Concertos with the Vienna Philharmonic was released in the US as a 2-DVD set by C Major/Unitel Classica. The concerts were filmed live in May 2011 at the Goldener Saal der Gesellschaft der Musikfreunde in Vienna. In addition to the performances, the DVDs include a conversation between Buchbinder and music journalist Joachim Kaiser as bonus material.

In opposition to recent trends, Buchbinder has been making live recordings instead of working in a studio for more than a dozen years. He explained why in a recent interview with the Wall Street Journal: "In the studio, you can't be spontaneous. In a live concert (and thank God you don't hear a lot of wrong notes when I play), you get the kind of emotion you can't produce in an artificial setting. There is a chemistry that takes place, and I don't care if there is also coughing and rustling."

Rudolf Buchbinder's concert calendar this year takes him around the world. His signature offering – the complete cycle of all of Beethoven's Piano Sonatas (which he has performed in more than 40 cities worldwide since 1979) – began in Milan on January 25, in Hannover on March 25, and will begin in Beijing in October 2012 and in Berlin in December 2012. In March 2012, he was the soloist on a European concert tour with Andris Nelsons and the City of Birmingham Symphony Orchestra, with performances in cities including Coventry, Luxembourg, Vienna, Stuttgart and Frankfurt. Further appearances on important international stages have included a concert with the London Philharmonic and Vladimir Jurowski (Moscow, April 1), performances with the Munich Philharmonic, with Buchbinder playing and conducting six Mozart Piano Concertos (May 25 to 28), as well as upcoming concerts with the Israel Philharmonic and Zubin Mehta (Tel Aviv on July 11 and 12; Haifa on July 15; Salzburg Festival on July 25). See complete schedule at the end of this press release.

Rudolf Buchbinder was admitted to the Vienna Musik Hochschule at age five, and remains the youngest student to gain entrance in the school's history. He made his debut at the age of ten at Vienna's Musikverein, performing Beethoven's Piano Concerto No. 1. The music of Beethoven has been a focal point of his career ever since – not only does he continue to perform Beethoven's works, but he constantly re-examines his approach to it, as well as Beethoven's scores. He owns 35 different, complete editions of the scores for Beethoven's 32 Piano Sonatas, and has analyzed each, tirelessly finding and correcting editorial errors. He attaches considerable importance to the meticulous study of these musical sources, and has an extensive collection of autograph scores, first editions, and original documents – including the autograph scores and piano parts of both Brahms concertos as copies.

Buchbinder says, "The stricter and the more exacting I am in my approach, the more I learn about the freedom of making music. This merely seems to be a paradox. Anyone who reads what composers really wrote acquires the impetus for a freer kind of playing. Composers demand this freedom from their interpreters by including far more differentiated instructions than the regular printed notation can ever hope to reproduce."

In spite of his heavy travel schedule, Buchbinder maintains that he spends many weeks of the year at his home in Vienna, which he shares with his wife. In addition to collecting musical scores, the pianist spends considerable time on other, non-musical hobbies – art and architecture, books, and movies. Buchbinder owns more than 4,000 DVDs of movies ranging from Abbot and Costello to Alfred Hitchcock and Billy Wilder, including all of the Oscar-winning films, and everything ever made by Charlie Chaplin and John Wayne.

About Rudolf Buchbinder: Rudolf Buchbinder is firmly established as one of the most important pianists on the international scene, he is a regular guest of such renowned orchestras as the Berlin Philharmonic, Vienna Philharmonic, New York Philharmonic, Orchestre National de France, London Philharmonic, National Symphony, and the Philadelphia Orchestra. He has collaborated with the world's most distinguished conductors including Abbado, Dohnányi, Dudamel, Frühbeck de Burgos, Giulini, Harnoncourt, Maazel, Masur, Mehta, Saraste, Sawallisch and Thielemann and is a regular guest at the Salzburger Festspiele and other major festivals around the world. Throughout the 2010-2011 season Rudolf Buchbinder had a particularly close cooperation with the Staatskapelle Dresden as its Artist in Residence in the first-ever position of "Capell-Virtuoso." Rudolf Buchbinder is also the founding artistic director of the Grafenegg Music Festival, a major international music festival near Vienna which launched in August 2007.

Of his appearance with the Los Angeles Philharmonic and Gustavo Dudamel, the Orange County Register raved, "You could hear the weight of his fingers, it seemed, falling onto the keyboard, each note given a nudged distinction. By avoiding both grandiloquent overstatement and dry objectivity, he plumbed the core of the noble simplicity in this music."