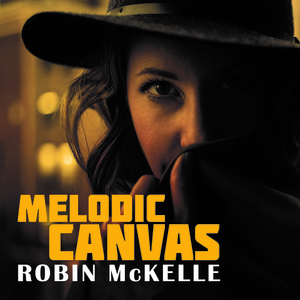 An Enigmatic Sound, a Storyteller's Narrative and a Live Performance Style Imbued with Rat Pack Moxie – Singer and Writer Robin McKelle is a Genre-Blurring Musical Alchemist, Taking Listeners on a Sonic Trip to the Old South, Sprinkling in Hints of the Motown Era or Even a Sade Album, and Mixing it Together to Create Her Inspiring ‘Melodic Canvas' of Soul, Jazz, Gospel and More

Singer/writer Robin McKelle is a musical enigma,and proudly so. On her upcoming April 20th album Melodic Canvas, she's empowered by the alchemy, embracing her genre-blurring style and no longer trying to fit into a box. The result is a deeply textured, rich, authentic collection, a mix of timely social commentary, intimate lyrics and a thoughtful call to action.

A savvy songwriter and a powerhouse vocalist, McKelle has long found a home where soul, jazz,pop, gospel, blues and the American Songbook cross paths. On the new cd, her sonic template takes listeners on a trip down to the Old South,or sprinkles in a sound that could've emerged from the Motown era, or even a Sade album. In her live performances, she exudes a bandleader's moxie that recalls the Rat Pack era. There's an insightful storyteller's voice that connects the new songs, a narrative thread that feels smart and soulful. McKelle's characters are vividly drawn, from the struggling teen in ‘Lyla' to the immigrant tale of ‘Simple Man'; the moments of social awareness, in ‘Yes We Can Can' (an Allen Toussaint cover featuring Chris Potter) and ‘It Won't End Up', are wise and inspiring without feeling heavy-handed; on first single ‘Do You Believe', out March 30th, McKelle questions religion, hate, misogyny. For the upcoming CD (which she produced,) McKelle sought a more ‘acoustic' vibe with a focus on percussion, to allow the subtleties of her voice to shine. In her songwriting and in the arrangements/production of the album, she mixes her varied influences together with strength and grace.

She comments, "There is a common thread that weaves through the music of this album. To inspire, through music, kindness and acceptance and a willingness to have the courage to stand with our brothers and sisters in equality no matter color, race, religion or ethnicity. To foster hope at a time when we seem to need it most. A musical mentor once told me that as an artist, this is our call to action. Melodic Canvas is my contribution. When thinking about making this record I was finding that I was really drawn first, to the idea of an acoustic sound -- using an instrumentation that would allow me to use more of the subtleties in my voice. I thought the idea of using percussion would give the music and earthy and warm vibe.

A few other things happened around the time I started writing for the album. First, I had just come off a tour with Danilo Perez and Jazz 100. My "well" was full. I was totally inspired after making music with Danilo and the band. (Chris Potter on Sax, Avishai Cohen on Trumpet, Ben Street on Bass, Adam Cruz on drums and Roman Diaz on Percussion). And 2nd, the election had happened… and so I had a lot to write about. I wanted to make music with the band. I wanted to record at the same time. I wanted to have beautiful musical moments and chose the musicians because of what they brought to the music. They themselves are great artists so that is what adds to the sound of the music. Shedrick Mitchell (piano, organ, Rhodes) was able to grasp the concept of where I was going with the music and he helped shaped the vibe of the music by the way he played what I wrote. I also found that I was missing singing more Jazz. Melodic Canvas is like coming back to jazz a bit. I'm a songwriter, singing jazz soul songs. I love that I'm able to use different timbres in the songs depending on what it calls for. It's intimate and I love the idea that if you close you eyes, maybe you can visualize us playing the music in your living room. It's not trying to be anything it's not.

It's just the music that we played in that moment. It's a more mature album.

This song is questioning religion. I question religion often, especially when hate,

violence and misogyny occur in the name of it. This is about someone who has lost their faith and they are searching for an answer… from a higher place.

Growing up today is really difficult for children. Lyla is a song of encouragement for

the young men and women who are lost in a society full of material items. These kids

hide behind their profiles on social media. It's hard for them to find something they are passionate about in a world full of noise. This is encouraging them to dream bigger and that we adults, are here to support them. We do hear them.

COME TO ME (featuring Chris Potter):

A romantic and vulnerable song about an attraction between lovers. The voice and sax are playful throughout as they flirt seductively around the melody.

The musical core of this is a minor blues. It's about a "no good" man but mostly about

a woman empowered to leave him. She was warned by her mamma but had to go through the experience herself to get the courage to see the truth.

My mother used to sing this spiritual to me when I was a very small child. She would

push me in a swing and sing this. I have always wanted to find a way to record it

(mostly for her). I put a simple gospel/blues feel behind it and added the gospel choir,

which really made it special.

When I heard the Ray Charles interpretation about 10 years ago, I immediately fell in

love with the song. Over the years touring in France I learned it was made famous in

France by Nicoletta. I am drawn to the desperation in the lyric so I tried to compliment

that with the musical arrangement and the phrasing. I've spent many years learning the French language and I wanted to give my French fans what they have been waiting for.

I wanted to tell a story about immigrants. My grandfather was an Italian/American

immigrant farmer. He worked many long days and nights. They relied on their hard work and faith. They came to America for a better life, just like the immigrants today. I've been so saddened by what is happening in my country (a nation built by immigrants) that I wanted to shine a light on the beauty of the American dream.

This is song of gratitude. Gratitude for the person or people you spend your life with.

our husband, wife, son or daughter.

YES WE CAN CAN (featuring Chris Potter):

Written by the great Allen Toussaint, this powerful song of hope is SO relevant to us today. " We gotta make this land a better land than the world in which we live. Help each man be a better man with the kindness that you give." We must have hope. This is what music gives us when we need it most.

I had a tough year, like many of my fellow friends, watching politics play out as they

have. I turned to music and writing to get my frustrations out. Watching our president divide the country with hate and violence is so discouraging but if we come together and raise our voices as one, we can move forward to be certain that history won't repeat itself.

A recent bio is here: http://robinmckelle.com/bio/

McKelle will tour Europe this Spring, before returning to the U.S. for tour dates

including a Rochester Jazz Festival appearance on June 28th. Keep up to date on

Al Street Acoustic Guitar (It Won't End Up, You're No Good)

(Come to Me) and Tenor Saxophone (Yes We Can Can)

The Piano Man's Choir on Swing Low & Yes We Can Can