Since the beginning of his musical career in the early 1990s, Cuban-born multi-instrumentalist Roberto Fonseca has stated his mission clearly: "I want my music to reach people who don't know me, and I dream of one day becoming a point of reference for my audience." Although still very young – by the standards of jazz, hip-hop, world music or any other genre – Fonseca has maintained a sharp focus on his mission that has already garnered him global recognition.

The UK Guardian is just one of the many voices in both the music and mainstream press worldwide to have recognized Fonseca's immense talent by heralding him as "a fabulously gifted pianist, composer and bandleader with a gift for melody that outshines more celebrated peers." The Guardian further proclaimed him as "one of a new breed who can transcend musical boundaries through sheer quality."

Born into a musical family in Havana, Cuba, in 1975, young Roberto originally gravitated to percussion, but started playing the piano at age 8 (the interest in percussion would eventually enhance his piano style). His first musical performances was playing drums for a band that covered Beatles songs.

He began composing at age 14, drawing inspiration from Afro-Cuban music. "In school, we used to regard American jazz as a point of reference," Fonseca recalls. "I felt that my music would be a fusion of both genres. I liked lots of jazz musicians, such as Herbie Hancock and Keith Jarrett, but also old American funk and soul classics."

His appearance at Havana's International Jazz Festival at the tender age of 15 was not only a revelation to audiences, but the launching pad for a musical education that resulted in a degree in musical composition from the Instituto Superior de Arte. But the degree was only the beginning of his education process. He saw every road after college as an opportunity to merge his style with other styles and create something greater than the sum of its parts. At 21, he embarked on a tour through Italy with singer Augusto Enriquez, which included performances on RAI, the state TV channel, which introduced him to audiences well beyond his Cuban origins.

Shortly after the Italian tour, Fonseca joined saxophonist Javier Zalba to form Temperamento, a group that became his creative platform for the next 15 years, beginning with the release of En el Comienzo in 1998. The album won the award for Best Jazz Album at the Cubadisco 1999 festival.

En el Comienzo was followed by three solo albums in rapid succession – Tiene Que Ver (1999), No Limit (2000) and Elengó (2001). In between these projects, he also composed the soundtrack for Black, a film by French director P. Maraval, and produced Un montón de cosas, an album by the hip-hop group Obsesión.

In 2001, he joined the Orquestra de Ibrahim Ferrer for a world tour that logged more than 400 performances throughout Europe, the UK, South America, Australia, Asia and just about every other corner of the globe. Led by Ferrer – an alumni of the Buena Vista Social Club™, the legendary Cuban collective that had taken the world by storm some five years earlier – the tour with the Orquestra positioned Fonseca alongside legendary figures like Cachaíto López, Guajiro Mirabal, Manuel Galbán and many others. The tour marked the beginning of an ongoing and fruitful relationship with various members of BVSC.

Fonseca's relationship with Ferrer strengthened in the years following the tour. When Ferrer set out to record his treasured collection of boleros, he tapped Fonseca to arrange the compositions and co-produce the recording.Mi Sueño: A Bolero Songbook was released in early 2005, and a world tour followed later in the year. The project was Ferrer's last – and arguably one of his greatest – before his death in August 2005.

Despite the heartbreaking loss, Fonseca had established his reputation as a creative bridge between traditional Cuban music and the sound of a new era. As such, he drew the attention of not just enthusiastic audiences but seasoned musicians as well. Omara Portuondo, another Buena Vista alumni also invited him to join her on tour.

The intensive touring and multicultural exposure planted the seeds for Zamazu, Fonseca's monumental 2007 recording that assembled more than 20 musicians and integrated elements of his various influences: Afro-Cuban, jazz, classical and traditional Cuban music. Among the musicians on this diverse and ambitious recording were Portuondo, Zalba, Carlinhos Brown, Vincente Amigo, Ramsés Rodríguez and many others. Following the release of Zamazu, Fonseca showcased generous portions of the recording at some of the most prestigious festivals in the world in front of spellbound audiences.

"Llegó Cachaíto," one of the tracks from Zamazu, appeared in Hancock, the 2008 film starring Will Smith. That same year, Fonseca also played on Portuondo's Gracias, a recording that won a Latin Grammy for Best Contemporary Tropical Album.

Zamazu was a tough act to follow, but Fonseca found a way to bring the magic and energy of his live show into the studio for his 2009 release, Akokan. The album featured his quartet with guest performances by Cape Verdean vocalist Mayra Andrade and American guitarist Raul Midón.

The following year, 2010, was no less hectic and ambitious for Fonseca. He collaborated with director Jorge Fuentes in the filming of Temperamento, a documentary chronicling the history of the band that Fonseca had co-founded more than a decade earlier. Fonseca also arranged and co-produced Havana Cultura with British DJ Gilles Peterson. The two-disc album released in 2010 assembles the best of a new generation of Cuban musicians – more than 60 in all – specializing in Afro-jazz, hip-hop, funk, reggaeton and R&B. Later that same year, he also released Live at Marciac, a CD-DVD set that captures Fonseca and his band at a 2009 festival date in France.

Along the way, Fonseca has developed an aesthetic sense that extends beyond music. This became most evident when he developed a professional relationship with French fashion designer Agnes B. Their rapport first emerged when he began wearing her creations for all of his performances, and deepened when he played live for the Agnes B fashion show in Paris in 2006. In addition, Fonseca's music has been used in Marie Claire's internet advertising and marketing campaigns.

His latest studio effort Yo, was recently nominated for a GRAMMY® in the category of Best Latin Jazz Album. Recorded in Paris, Yo draws its simple but appropriate title from the Spanish word for "I" or "me." Fonseca is clearly the focal point of the recording, but his multidimensional and multicultural sound exists within an intricate mosaic made up of a total of 15 fifteen musicians from Cuba, Africa, the U.S. and elsewhere. All of these valuable partners help Fonseca down new paths that continue to explore countless directions and ideas.

Fonseca and his crew have already touring worldwide in support of Yo, with more than 100 concerts since April 2012. In the midst of this ambitious schedule, he has also managed to remix a new recording by the French alternative rock band Mensch.

The live shows have been stunning audiences across Europe, North America and Japan.  The Guardian said "A rousing demonstration of what can happen when a great Cuban pianist becomes obsessed with Africa.  Fonseca is the finest fusion exponent in Cuba." The Arts Desk said of Roberto, "The sense was that Fonseca has music hard-wired into every cell, pouring out of his body and soul."  The album has also received positive accolades, topping the Best of 2012 album lists in The Sunday Times, Le Monde, The Guardian, Vibrations, Telerama  and after his release in the U.S.A continuing the tradition with the Best of 2013 in The Washington Post, "Songs of 2013″ on NPR.

As always with Fonseca, there are new creative worlds to explore, and new artistic bridges to build between the traditional and the modern-day. "This album unveils the beginning of a new phase more than the closure of an old one," he says. "I want to delve deep into my roots in light of my experiences and show the diversity of my musical universe, all these ideas which I had out aside, unable to use until now."

In 2014 Roberto Fonseca combined solo performances, robertoSOLOfonseca in France and Rusia. He briefly toured in the U.S. with a trio format and performed last summer with Mali singer Fatoumata Diawara.

From that encounter, Roberto released the new album At Home (Jazz Village). 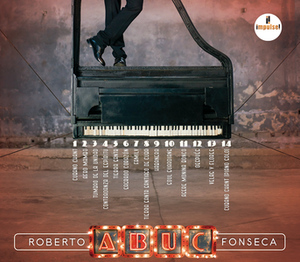 For nearly two decades, Grammy nominated pianist Roberto Fonseca has been exploring and celebrating the music of his native Cuba. As a composer, producer, solo artist and collaborator with other Latin American music luminaries, he has served as a musical ambassador to his American neighbors to the north and to the rest of the world with his richly melodic compositions and recordings that capture the irrepressible Cuban sound and its rich musical history. ABUC,his new album set for release on Impulse! Records on October 28, 2016, is just what the title suggests – a look backward at the evolution of Cuban jazz. Although nearly all 14 of the tracks on the album were written or co-written by Fonseca, the project as a whole overall feels like a retrospective of various musical styles and sources spanning several decades.