A pianist of "unerring, warm-toned refinement, revealing judicious glimmers of power," [Los Angeles Times] Robert Thies (pronounced "Theece") is an artist renowned for his consummate musicianship and poetic temperament. He first captured worldwide attention in 1995 when he won the Gold Medal at the Second International Prokofiev Competition in St. Petersburg, Russia. With this victory, Thies became the only American pianist to win first prize in a Russian piano competition since Van Cliburn's famed triumph in Moscow in 1958.

Conductor Jorge Mester hails Robert "a genius", and Maestra JoAnn Falletta touted after a recent performance, "Conducting the Brahms Second Piano Concerto with Robert Thies was one of the most beautiful and deeply satisfying musical experiences of my life."

Praised for his "thoughtful and intensely moving interpretations" Thies enjoys a diverse career as an orchestral soloist, recitalist, and chamber musician. He has already performed forty concerti with orchestras all over the world. In one season alone he performed thirteen different concerti, garnering consistent critical acclaim. He has appeared with such orchestras as the Saint Petersburg Philharmonic, Liepāja Symphony (Latvia), Mexico City Philharmonic, the National Symphony of Mexico, Auckland Philharmonia (New Zealand), Louisville Orchestra, Fort Worth Symphony, Virginia Symphony, Buffalo Philharmonic, Pasadena Symphony, Des Moines Symphony, and the Naples Philharmonic. His concerts have been broadcast throughout the United States, Russia, Estonia, Latvia, Bolivia, Hungary, Mexico, and New Zealand.

As a Steinway artist and frequent recitalist in the United States and abroad, Mr. Thies has developed a reputation as a "genuine" and "sincere" artist, creating delicately balanced programs and performing in a manner to draw focus to the composer rather than to himself. Under the sponsorship of Community Concerts, he completed a forty-city tour of the United States in 2001. In May 1999, he was honored with a special invitation to perform in the Hermitage Theater in St. Petersburg, Russia, built for Empress Catherine the Great.  His South American debut occurred in Cochabamba, Bolivia in 2002, and he has given recitals in Mexico, Germany, Austria, and Hungary.

A dedicated chamber musician, Thies is highly sought after as a collaborator, and he has shared the stage with many esteemed musicians, including those from the LA Philharmonic and the LA Chamber Orchestra. In March 2012 he was the official pianist for the International Piatigorsky Cello Festival at USC, at which he performed over 25 works in one week and played a recital with renowned cellist, Thomas Demenga.  In May 2016 he will reprise this role. An avid proponent of art song, Thies has also appeared with many outstanding singers in recital, most recently in Los Angeles with LA Opera baritone, Ryan McKinny in a performance of Schubert's great opus, Winterreise. Over the past decade he founded the Thies Piano Quartet, the Pantoum Trio, and most recently, The Thies Consort. The Consort performs a wide range of works of varying instrumentation and size, thus allowing for innovative and unique programming with musical continuity based on a style, composer, or other concept.

Thies's "grace and unsurpassed lyricism" are in high demand at festivals and special celebrations. In 2002, in conjunction with the Hollywood premiere of Roman Polanski's film The Pianist, he performed Władysław Szpilman's Concertino for Piano and Orchestra with the Los Angeles Jewish Symphony. That same year Thies earned national recognition for his collaboration with noted cultural historian and author, Joseph Horowitz, in the Pacific Symphony's Dvořák in America festival. To commemorate the fiftieth anniversary of Arnold Schoenberg's death, Thies was invited to Mexico City's Palacio de Bellas Artes in 2001 to perform the composer's seldom-heard Piano Concerto with the National Symphony of Mexico, a memorized performance for which he received high critical acclaim. During the fall of 1997 Mr. Thies worked alongside distinguished late Polish composer Henryk Górecki in the United States premiere of his Piano Sonata. This collaboration was later documented in a 2012 Polish documentary entitled Please Find Henryk Mikołaj Górecki. In a commemorative gesture just after Górecki's recent passing, Thies's performance was broadcast on KUSC 91.5 FM Classical Radio. Thies has performed at the music festivals of Ravinia, Aspen, Sedona, Cape May, Music Academy of the West, Mostly Mozart, the San Luis Obispo Mozart Festival, High Desert Chamber Music, and the Port Townsend Chamber Music Festival.

In Los Angeles, Thies has worked with film composers James Newton Howard, the late James Horner, Danny Elfman, Mychael Danna, John Williams, and Lalo Schifrin, among others. His playing can be heard prominently in the 2015 film, Concussion, as well as in Mychael Danna's Oscar winning score to The Life of Pi. In 2017 he was a featured soloist in Philip Glass's score to Jane, a documentary about Jane Goodall, which was played live to picture at the Hollywood Bowl. He was a featured pianist on Danny Elfman's concert piece: Serenada Schizophrana, and in 2015 and 2016, he was a featured musician in live performances of Elfman's A Nightmare Before Christmas at the Hollywood Bowl. In 2010 the Grammy winning conductor, Lucas Richman, invited him to join a full symphony orchestra on a North American tour of John Williams' Star Wars in Concert.

Thies's recordings can be found on the Centaur, Albany, Golden Tone, and Denouement Records labels. In 2017 he recorded Brahms' two Sonatas for Clarinet and Piano with clarinetist David Sapadin. In 2015 with violinist Linda Wang, he recorded recently discovered masterpieces by Ravel and Messiaen. In 2014, he recorded two works of composer, Bruce Babcock, and a sonata by Bruce Broughton. He has also made numerous classical recordings for Yamaha Disklavier, featuring the music of Prokofiev, Ravel, Brahms, and Beethoven. He has premiered and recorded works written for him, such as Stu Phillip's Variations for Piano and Orchestra, and Kevin Kaska's Fantasy for Piano and Orchestra, and has premiered and recorded many works by Grammy-nominated composer, Gernot Wolfgang.

In February 2006 Robert released his debut solo recording Live in Recital.  That same year he recorded a crossover improvisational album, Difference, with Croatian flutist, Damjan Krajacic. This collaboration led the groundwork for the release of two critically reviewed albums for Gentle Rain Records in the Fall of 2012 and 2016: Blue Landscapes and Blue Landscapes II: Discoveries, two collections of original compositions and improvisations. The latter CD won a Global Music Award.

Mr. Thies is sought after as a master class teacher, chamber music coach, lecturer, and adjudicator across the globe. As a private teacher, his students have won competitions and been accepted to major music conservatories around the country.  In 2017 he was appointed Artistic Director of the South Bay Chamber Music Society, founded in 1963, and one of the premier presenters of chamber music in Los Angeles.  In June 2015 Thies presented a program of Scandinavian music at the Royal Academy of Music in Stockholm, Sweden as a member of the College Music Society.  In 2013, he was appointed Director of Chamber Music at the European American Musical Alliance (EAMA) in Paris, France. In May 2012, he gave a webinar simultaneously to three universities in the United States and Mexico, and spoke about developing one's musicianship to open up various music career options. He is also a frequent guest lecturer to various branches of the Music Teachers Association of California. From 2003-07, he was a member of the faculty of the American Institute of Musical Studies (AIMS) in Graz, Austria, and worked beside his former teacher, Harold Heiberg, an authority on German art song. There Thies coached singers and pianists on the works of the great Germanic composers of Lied: Schubert, Schumann, Brahms, Wolf, and Strauss.  His article on collaboration "I am Not an Accompanist" was published in the Fall 2017 edition of the California Music Teacher's magazine.

Though born on the East Coast, Thies makes a home in Los Angeles. His teachers have included Robert Turner and Daniel Pollack, both protégés of the legendary Russian pedagogue Madame Rosina Lhevinne, and the great pianist Josef Lhevinne.

Composer and flutist Damjan Krajacic is an artist characterized by "his own style defined by the immediacy, intensity, quality and sophistication of sound" [Cantus Magazine].

A musician of eclectic styles, Damjan's background spans jazz, latin jazz, and classical training flavored by his own Eastern European heritage. From an early age on, he was drawn to Latin music, partially due to his father - a classical guitarist with a love for Spanish guitar music - but he never lost touch with the great classical tradition of flute playing, either. A native of Zagreb, Croatia, Damjan holds a Master of Music degree in Afro-Latin Music from California State University Los Angeles. His teachers and mentors were the world-renowned flutist Danilo Lozano, with whom he studied charanga, jazz, latin-jazz and classical flute, as well as the award-winning flutist and composer James Newton, with whom he studied jazz. Damjan has performed in jazz concerts and festivals in both the United States and Europe, both as a leader and collaborator, and continues to be active on both continents.

In 2014, Damjan was instrumental in starting the Croatia Flute Academy, a week-long summer flute festival in Karlovac, Croatia. There he served as Artistic Director and Professor of Jazz and Latin-Jazz Flute from 2014-2016, teaching alongside some of the biggest names in the classical and jazz flute community, such as Pierre-Yves Artaud, Trevor Wye, Orlando "Maraca" Valle, and James Newton.

With 6 critically-acclaimed albums under his name, Damjan is a seasoned artist with a mature compositional and stylistic approach that seamlessly combines various musical styles and influences. Damjan's music ranges from groove-packed latin-jazz to meditative ambient music. His compositions are infused with jazz and classical sensibilities as well as Eastern European rhythms and melodies. They continuously challenge the boundaries and role of the flute in small, improvisatory groups. His jazz quartet CD "Visions", with pianist Matija Dedic, bassist Martin Gjakonovski and drummer John Hollenbeck, was nominated in Croatia in 2015 for the prestigious Porin Award "Best Jazz Music Album". Damjan currently leads his own latin-jazz quintet "baCLAVE", with which he is releasing a new album in 2019.

In 2006, Damjan started a collaboration with pianist Robert Thies with a release of a crossover improvisatory album "Difference". This led to two more critically-acclaimed albums for Gentle Rain Records in the Fall of 2012 and 2016: Blue Landscapes and Blue Landscapes II: Discoveries, two collections of original compositions and improvisations. The latter CD won a Global Music Award while the third album of the Blue Landscapes series is scheduled for release by Real Music in November of 2019. 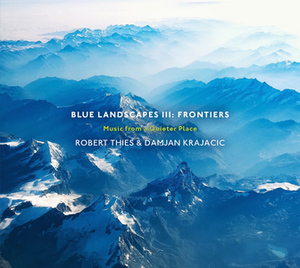 ALL PRESS SECURED BY BETH ANN HILTON@THE B COMPANY