Ray Chen started learning the violin when he was four years old and was accepted into the prestigious Curtis Institute of Music at 15, where he studied with Aaron Rosand and was supported by Young Concert Artists. After winning the Yehudi Menuhin Competition in 2008, Chen came to the attention of renowned violinist Maxim Vengerov, who described him as "a very pure musician with great qualities such as a beautiful youthful tone, vitality and lightness." Chen recently returned to the competition as their youngest ever juror.

In 2012, Chen became the youngest soloist ever to perform in the televised Nobel Prize Concert for the Nobel Laureates and the Swedish Royal Family. His Carnegie Hall debut with the Royal Stockholm Philharmonic and Sakari Oramo, as well as his sold-out Musikverein concert with the Gewandhaus Orchestra and Riccardo Chailly were met with standing ovations.

Chen, who has released three albums on Sony, recently completed a five-city tour of China with the Gothenburg Symphony and Kent Nagano as well as a European tour with the LPO and Christoph Eschenbach. Other highlights include his debut with the Rotterdam Philharmonic, a recital at the Amsterdam Concertgebouw and a Bastille Day performance with Daniele Gatti and the Orchestre National de France for a televised concert on the Champs-de-Mars in Paris in front of an audience of over 800,000. 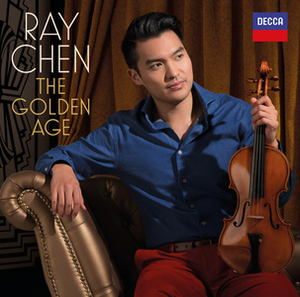 Deemed one of today's most charismatic and compelling young violinists, Ray Chen reveals his new album The Golden Age – a thrilling collection of chamber and orchestral works – to be released on June 8. It is his first recording on Decca Classics since signing to the label last year.

The Violinist handpicked a selection of works for the upcoming album, all of which celebrate the "golden age" of the violin – not only in terms of repertoire, but also in terms of performance style and ingenuity. The centrepiece is Max Bruch's Violin Concerto, performed with the London Philharmonic Orchestra and conductor Robert Trevino and recorded in August last year.