The New York Times has called Raul Midón "a one-man band who turns a guitar into an orchestra and his voice into a chorus." Now, with his exciting new album – If You Really Want, to be released via Artistry Music/Mack Avenue on September 14 – Midón's voice and guitar ride the waves of an actual orchestra: the acclaimed Metropole Orkest, the GRAMMY® Award-winning Dutch ensemble that has collaborated with artists from Al Jarreau and Elvis Costello to Laura Mvula and Snarky Puppy. Midón – who earned his first GRAMMY nomination for Bad Ass and Blind, his Artistry Music/Mack Avenue album of 2017 – worked hand in glove on If You Really Want with another renowned GRAMMY winner and frequent Metropole Orkest collaborator: conductor-composer-arranger Vince Mendoza. He created beautifully dynamic arrangements, inspired not only by the singer-guitarist's melodies, harmonies and rhythms but by his lyrics, too. Alongside fresh versions of six favorites from past Midón albums, If You Really Want features four previously unrecorded songs: "If You Really Want," "Ride On A Rainbow," "Ocean Dreamer" and "All Love Is Blind." This past spring, Midón performed in National Public Radio's popular "Tiny Desk Concert" feature, with NPR prefacing the broadcast by saying: "Raul Midón lives in a world of sound – blind since birth, Midón's interpretation of his surroundings is borderless. He sings with the passion of the best classic soul singers, and his instrumental chops stand alongside the most accomplished jazz musicians."

About creating If You Really Want, Midón says: "So many of the songs go to places on the new album that I'd never imagined before, like with ‘Sunshine (I Can Fly).' I had recorded that song on both studio and live albums before, but the new arrangement feels so different, so exciting, so epic – the ultimate version of the song, I think. I also love the way the ballads came out, like with the new ‘Ocean Dreamer.' That song's lyrics are this sort of kaleidoscope of images, and that's enhanced by Vince's beautiful orchestration. To me, it also feels like the best ballad singing I've done on record." The album was the product of "both an exciting live experience and a thoughtful, meticulous process," Midón explains. "The recording started with me singing guide vocals and playing guitar live with the Metropole ensemble in the studio in Holland – that gave the orchestra the real vibe of the songs. Then, once the ensemble parts were tracked, I took the recordings home, taking my time to re-cut the vocals and guitar so that they were as nuanced as possible.".

Midón is full of praise for his "mind-blowing" collaborators. "The Metropole orchestra is a rare collection of musicians, these orchestral players who have a real feel for jazz, having worked with serious cats like guitarist John Scofield," he says. "Their rhythm section is as good as any I've played with, so groovy and tasteful. We had a Latin percussionist there, too, Efrain Toro – he added a lot, particularly on ‘Sunshine.' And Vince is such a high-caliber conductor. His ears are so acute that he'd hear things like a flute just slightly sharp in one bar, which I never heard – and I got good ears! More than that, there's nothing syrupy or over-the-top about the arrangements – it's not just strings laden onto everything. The orchestrations are interactive and precise, with all the chord voicings carefully considered."

If You Really Want includes choice numbers from across Midón's career: "Sunshine (I Can Fly)," "Sittin' In The Middle" and "Suddenly," from his hit debut, State of Mind (2005); "Pick Somebody Up," from A World Within A World (2007); "Everybody Deserves A Second Chance," from Synthesis (2010); and "God's Dream," from Don't Hesitate (2014). Then there are the four inspired new songs. "I wrote ‘Ride On A Rainbow' especially for this album," Midón explains. "The lyric is whimsical, being based on this thing I had as a kid of listening to the radio a lot and imagining that the sounds were riding on radio waves. I still have that in mind, so it seemed ideal for that feeling of riding the orchestra's wave of sound. I play a six-string banjo on this song, including a solo." About "Ocean Dreamer," he says: "I wrote this ballad expressly to sing with the orchestra, inspired by the sound of the strings on the Joni Mitchell LP Don Juan's Reckless Daughter." Midón had "All Love Is Blind" on hand for a while, he says, waiting for the right setting: "The melody and chords have this cinematic quality to them that I thought orchestration would maximize – and it did." As for "If You Really Want," Midón wrote that years ago, before he moved to New York in the hopes of making it. "I really had this song in my back pocket, and I'm glad I found the ideal place for it as the new album's title track," he says. "It's about the power of positive thinking to fulfill your dreams, as I was able to do by becoming a professional musician, making records and touring the world. Here I am, recording with a great European orchestra. This, like so many things in my career, has been a dream come true."

With a GRAMMY nomination under his belt and a batch of new songs already set to record next year, Midón feels like he's "on a roll," he says. "And right now, I'm thrilled with how If You Really Want came out. I hope my fans dig the album as much as I do, and it brings some new listeners along for the journey, too."

Along with releasing 10 studio albums as a solo artist, Midón – dubbed "an eclectic adventurist" by People magazine – has collaborated with such heroes as Herbie Hancock, Stevie Wonder and Bill Withers, along with contributing to recordings by Queen Latifah, Snoop Dogg and the soundtrack to Spike Lee's She Hate Me. A native of New Mexico who was educated in the jazz program of the University of Miami – and who now lives in Maryland after years in New York City – Midón has earned acclaim the world over, with a fanbase that stretches from San Francisco to India, Amsterdam to Tokyo. A rapt critic for the U.K.'s Guardian newspaper wrote: "Midón has a lovely voice, a beautifully controlled tenor that can express anything from tenderness to passion… And the guy can play. His strumming has a flamenco flourish, but after a while, you realize he can do every kind of accompaniment he needs on acoustic guitar."

For a glimpse of how magnetic Midón can be live, seek out on YouTube the clip of his appearance on The Late Show With David Letterman in 2006. Performing "State Of Mind," the title track from his major-label debut, Midón unveils what would become his signature combination of silky voice and percussive guitar. His playing is a syncopated wonder in which bass, harmony and melodic lines fly from the fretboard in a way that belies the fact that all the music is being produced by just two hands. If that weren't enough, Midón busts out his improvisational mouth-horn technique, in which he creates a bebop "trumpet" solo with his lips, earning himself a burst of mid-song applause from the audience. It's the sort of performance that led the Huffington Post to describe how "he plays with such freedom and joy that his hands smile."

The title of Midón's 2017 release Bad Ass and Blind came from an apt description of its maker that soul icon Bill Withers endorsed; the album saw Midón collaborating with such top jazz players as trumpeter Nicholas Payton and pianist Gerald Clayton, and it earned the singer his GRAMMY nomination for "Best Jazz Vocal Performance." NPR noted that the disc continues Midón's "streak of records that cross boundaries with ease and head-turning musicality." His live 2016 rendition of John Coltrane's jazz classic "Giant Steps" – which sees him fly through all 12 keys on the guitar – earned more than a million views via Facebook, with no less than fusion hero Al Di Meola giving the performance a thumb's up. Midón has also released the captivating CD/DVD Invisible Chains – Live from NYC, which documents an intimate concert in Joe's Pub at the Public Theater from 2012.

Ever since being told by some when he was a child that his blindness meant that "you can't do this, you can't do that," Midón has lived a life devoted to beating the odds and shattering stereotypes, learning his own lessons along the way. "As someone who has never seen, I've always felt at a disadvantage in that lyric writing is usually very visual," he says. "People really relate to images, and I've never seen images. But what I realized early on is that you have to write from what you know, and I hear, touch and feel intensely – and those are sensations and experiences that everyone can relate to."

A World Within A World 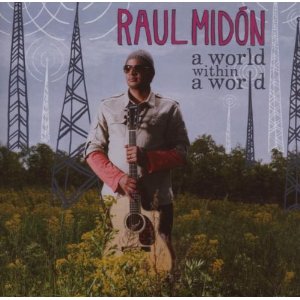 Originality in pop these days is a commodity. Raul Midon is rare in music, and his originality and vibrant sound are again evident on his new CD: A World Within a World (Manhattan Records). Following up on his audacious: State of Mind CD, A World Within a World provides an even more memorable song cycle, again revealing great depth, talent, and dedication. Midon who loves Paul Simon, James Taylor and Prince as much as Miles Davis, is a fiercely a single-minded artist, blind from birth, who has always created with his imagination.

A World Within A World