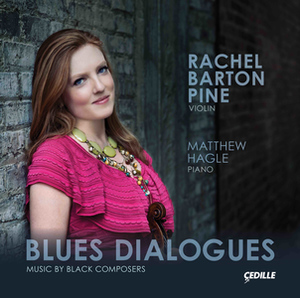 Pianist Matthew Hagle, Pine's longtime recital partner, joins her on their third album together on Cedille and Pine's 21st for the Chicago-based label.

Other landmarks include the first recordings of Wendell Logan's violin and piano arrangement of Duke Ellington's In a Sentimental Mood; Daniel Bernard Roumain's Filter for Unaccompanied Violin as updated in 2018 with an opening cadenza written specially for Pine, and the violin version of Charles S. Brown's A Song Without Words.

Pine had the opportunity to work directly with several of the composers on their pieces, specifically Perkinson, Dolores White, Childs, and Roumain.

In addition to the 23 tracks on the physical CD, Louis Kaufman's violin and piano arrangement of "Blues" from William Grant Still's Lenox Avenue is included on all digital album downloads and is available for streaming and as a free-standing download purchase.

Blues Dialogues"explores the expressive power of the blues," writes Mark Clague in the album's liner notes. Each track traces some lineage to the early acoustic blues giants, but "rather than rehearse the conventional 12-bar blues progression, the composers featured here find inspiration in the freedom of the blues."

Listeners will hear quotes of American fiddle tunes, gospel hymns and spirituals, boogie-woogie dance tunes and, in the case of Roumain's Filter for Unaccompanied violin, "sonic references to the signal processing of electronic dance music."

In her introductory essay in the album's liner notes, the internationally renowned classical violin soloist calls the blues "my second-favorite genre of music." The Chicago native cites, as early influences, her parents' blues record collection, local radio, and hearing blues greats perform at the annual Chicago Blues Festival and at the Kingston Mines blues nightclub. As a teenager, leafing through scores at her favorite sheet music shop, she discovered Baker's Deliver My Soul, the album's opening track. "Here was a 12-bar blues made into a classical work for violin and piano! I had to learn it," Pine writes.

She sought blues coaching from Chicago's multi-genre violin guru Edgar Gabriel and later performed with electric blues guitarist and singer Son Seals and harmonica virtuoso Sugar Blue at an O'Hare International Airport event, which she calls "one of the musical highlights of my life."

The forerunner of Blues Dialogues was Pine's groundbreaking and widely applauded 1997 Cedille album, Violin Concertos by Black Composers of the 18th and 19th Centuries, with Daniel Hege conducting the Encore Chamber Orchestra (Cedille Records CDR 90000 035). The Chicago Tribune described it as "music of great charm and elegance, rendered with sensitivity and stylish bravura." Gramophone proclaimed it "a fascinating issue," while The New York Times said Pine "handles the concertos' varied demands with unaffected aplomb, performing this music lovingly rather than dutifully."

That recording led to invitations to appear on diversity panels and prompted questions from students, parents, teachers and colleagues about where to find more works by Black composers. Subsequently, Pine's RBP Foundation established its Music by Black Composers project, a multi-faceted educational initiative and music repository. Over the last 15 years, Pine and her RBP Foundation have collected over 900 works by more than 350 Black composers from the 18th–21st centuries, representing Africa, North and South America, Asia, the Caribbean, Europe, and Oceania. While reviewing repertoire for the project, Pine re-connected with her youthful embrace of the blues and conceived the Blues Dialogues program.

Pine is a member of the Chicago Music Association, originally founded as the first branch of the National Association of Negro Musicians, an organization that supports classically trained Black musicians. When Pine and Hagle performed a selection of these works at benefit concert for the association, a Chicago newspaper critic praised "her marvelous playing" and commended Hagle for his "firm and polished support."

Blues Dialogues was produced by Grammy-nominated producer James Ginsburg and engineered by multiple-Grammy nominee Bill Maylone at the Music Institute of Chicago's Nichols Hall in Evanston, Ill., December 18–22, 2017, and May 4, 2018.

Pine has appeared as soloist with many of the world's most prestigious ensembles, including the Chicago and Vienna Symphonies, Philadelphia Orchestra, Royal Philharmonic, and Camerata Salzburg.

Pianist Matthew Hagle has been heard in prestigious concert venues throughout the United States. A resident of the Chicago area, he has performed at the Ravinia Festival, Symphony Center, and Chicago Cultural Center. His complete Beethoven piano sonatas cycle aired live from Chicago's WFMT radio. He frequently performs as a chamber musician with members of the Chicago Symphony Orchestra. A faculty member at the Music Institute of Chicago, he also directs the organization's Musicianship Program. His website is www.matthagle.com.

An independent nonprofit enterprise, Cedille Records is the label of Cedille Chicago, NFP. Sales of physical CDs and digital downloads and streams cover only a small percentage of the label's costs. Tax-deductible donations from individual music-lovers and grants from charitable organizations account for most of its revenue.

Can you name three Black classical composers?  Violinist Rachel Barton Pine can name 350 who have composed more than 900 works. This October 19, her Rachel Barton Pine Foundation's landmark "Music by Black Composers" shows the world #BlackisClassical through the release of three landmark projects:

MBC Violin Volume I, the first in a series of pedagogical books of sheet music exclusively by Black classical composers featuring 22 works for violin spanning from 1767 to 2014. The playing level is comparable to books 1-2 of the Suzuki Method, and the series is designed to enable everyone from beginners through Mendelssohn Concerto level to include works by Black composers in their studies.

Released in conjunction is Pine's Blues Dialogues, an album of classical works written by 20th- and 21st-century composers of African descent on Cedille Records.

There are 54 composers represented among the RBP Foundation Coloring Book, MBC Violin Volume 1, and Blues Dialogues, 22% of whom are women.

The intention is that, in part through exposure to these composers and their music, current and future generations of performers, presenters and audience members will expect and demand that music on our concert stages be a full representation of the human experience.

The award-winning, Billboard chart topping violinist, (www.rachelbartonpine.com) performs with the world's leading orchestras and has recorded 37 acclaimed albums. Her performances are heard on NPR and stations around the globe.

On October 19, 2018, the internationally-renowned violinist releases Blues Dialogues, an album of classical works for unaccompanied violin or violin and piano with a strong blues flavor written almost exclusively by 20th- and 21st-century composers of African descent.

The album features several world-premieres: Noel Da Costa's "A Set of Dance Tunes for Solo Violin," Dolores White's expanded, four-movement version of her "Blues Dialogues for solo violin," and Billy Childs's "Incident on Larpenteur Avenue," a single-movement violin sonata exploring the impact of the 2016 killing of Philando Castile by a Minnesota police officer.

In addition on October 19, her Rachel Barton Pine Foundation's "Music by Black Composers" releases: RBP Foundation's MBC Violin Volume I - the first in a series of pedagogical books of music exclusively by Black classical composers; The Rachel Barton Pine Foundation Coloring Book of Black Composers, and a timeline poster of 350+ Black classical composers from around the world.

As a native Chicagoan, Pine grew up with the blues, and calls it her second-favorite genre of music. In 1997, Pine released Violin Concertos by Black Composers of the 18th and 19th Centuries featuring historic compositions by Afro-Caribbean and Afro-European composers that had been previously overlooked. Pine soon found herself sitting on diversity panels and fielding questions about where to find more works by Black composers. She quickly discovered that most repertoire by Black composers is out of print or only exists in manuscript. So, in 2001, her not-for-profit RBP Foundation committed to the Music by Black Composers project, and has collected more than 900 works spanning four centuries by more than 350 Black Composers (men and women) from North America, South America, the Caribbean, Asia, Europe, and Africa.

As she was reviewing selections for the MBC curriculum, she found herself playing a blues-influenced pieces and the idea for Blues Dialogues was born.