Pete Townshend, The Who's guitarist and principal songwriter, was born into a musical family in Chiswick, West London, on May 19, 1945. His father Cliff played the alto saxophone with the Squadronaires, the RAF dance band, and his mother Betty Dennis sang professionally. An aunt encouraged him to learn piano but after seeing the movie Rock Around The Clock in 1956 he became drawn to rock'n'roll, an interest his parents actively encouraged.

Having dallied briefly with the guitar, Pete's first real instrument was the banjo which he played in a schoolboy trad jazz outfit called the Confederates. The group featured John Entwistle on trumpet but after John took up the bass guitar the two friends joined another schoolboy band, the Scorpions, with Pete on guitar. Pete and John both attended Acton County School where another, slightly older, pupil Roger Daltrey had a group called the Detours. Roger invited John to join and around six months later the nucleus of the Who was in place when John persuaded Roger that Pete should join too.

Meanwhile Pete had graduated to Ealing Art College, where he broadened his mind on a diet of radical performance art and American blues music, both of which would eventually inform the Detours as they worked their passage through the West London club and pub circuit. With the arrival in 1964 of drummer Keith Moon and managers Kit Lambert and Chris Stamp, The Who were on their way, with Pete increasingly cast in the role of leader and spokesman.

Pete soon found himself at the forefront of the British musical boom of the Sixties. As guitarist and composer of the band, he became the driving force behind one of the most powerful, inventive and articulate bodies of work in rock. From early classic three-minute singles like ‘My Generation', ‘Substitute' and ‘I Can See For Miles', through to complete song cycles in the shape of Tommy, Lifehouse and Quadrophenia, Pete established himself as one of the most gifted and imaginative musicians working in the rock field.

Pete spent all of the Sixties and much of the Seventies concentrating his creative energies on the Who. In concert he became recognised as the most visual guitarist of his and future generations, careering around the stage, leaping into the air and spinning his arm across the strings in his trademark ‘windmill' fashion. He developed a unique guitar style, a cross between rhythm and lead which veered from furiously strummed chord patterns and crunching power chords to chromatic scales and delicate arpeggios. On top of this he frequently smashed his guitar into smithereens at the climax of a performance.

In 1967 Pete became a follower of the Indian avatar Meher Baba which inspired him to release three privately circulated devotional albums. These led him to compile Who Came First (1972), the first of a series of non-Who albums, beginning with Rough Mix (1977), a collaboration with fellow Baba devotee Ronnie Lane, and followed by the solo albums Empty Glass (1980), All The Best Cowboys Have Chinese Eyes (1982), White City: A Novel (1985), The Iron Man, an adaptation of Ted Hughes' children's story (1988), and Psychoderelict (1993). In 1984, with the Who temporarily disbanded, he led an ad-hoc group called Deep End which released a live album in 1986, and he has also issued a series of albums called Scoop which feature Pete's demos for Who songs, solo material and miscellaneous unrealised projects.

At various times throughout the Nineties Pete toured North America with a solo band, initially performing Psychoderelict but, as the decade wore on, he presented shows that included his solo material as well as Who classics. Many such shows, including occasional concerts in the UK, have been done in aid of charities.

Long acknowledged as one of the most intelligent and articulate of rock performers, Pete has run his own book publishing company and worked as an editor at the literary house of Faber & Faber which in 1985 published ‘Horse's Neck', a collection of his short stories. Ever inquisitive about new ideas and technology, he has turned his attention to the Internet on which his regular and often frank journals and essays provide essential reading for fans. In many ways Pete can be regarded as an Internet pioneer, insofar as Lifehouse, the project that embraced the songs on the album Who's Next, included ideas such as the ‘Grid', a national communications network, and ‘experience suits' where life programs were fed to individuals via the Grid. At the time most observers were unable to grasp these ‘science fiction' ideas but with hindsight it's clear that Pete's concepts were not too far removed from the web and virtual reality that we know today. In 1970, the technology wasn't available for the project to be realised and it took Pete almost 30 years to see it through. It was only fitting that when he did get to perform the Lifehouse music in its entirety it was available to a global audience via a webcast. A ‘Lifehouse Method' website was made available from 2007 to 2008, through which ‘sitters' were able to create musical portraits online. Pete has plans to do more with this process in the future.

In the meantime Pete continues to write and perform with The Who, and 2006 saw the release of Endless Wire, the band's first new album in 24 years. The band played the Superbowl in 2009 and, this year, at the closing ceremony of the London Olympic Games. They are touring ‘Quadrophenia' in the U.S. in 2012/13.

Pete has, at last, published his memoir ‘Who I Am' and is currently working on ‘Floss', an ambitious new music project. 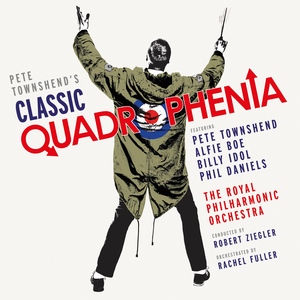 A leading icon of the British music revolution of the 1960s, Pete Townshend made his name by creating the power chord, smashing guitars on stage, and penning anthems of teenage rebellion like My Generation. Now, approaching 70 and half a century after he penned the archetypal rock lyric "Hope I die before I get old," Townshend has created a "classical" version of one of The Who's landmark albums – Quadrophenia – called: Classic Quadrophenia, for a symphony orchestra, opera singer and choir. This new version released by Deutsche Grammophon/Universal Music Classics was orchestrated by Rachel Fuller. The album features Alfie Boe as Jimmy, Pete Townshend as The Godfather, Billy Idol as Ace Face/Bell Boy and Phil Daniels  (the star who played Jimmy in the original movie version of Quadrophenia).  as Dad. Also featured on the recording are the London Oriana Choir with Choirmaster Dominic Peckham, the Royal Philharmonic Orchestra, conducted by Robert Ziegler and orchestrations by Rachel Fuller.