Principal trumpet with the Orchestre symphonique de Montréal since 1995, Mr. Merkelo is regularly praised by the Montreal press as "a spectacular soloist… a most impressive master of his instrument" (Montreal Gazette), a "great virtuoso… dazzling" (La Presse). He has been featured frequently with the OSM, including tours to South America and Lincoln Center in New York.

He has been featured with orchestras, and in recital, throughout the United States, Canada, Russia, China, Japan, Portugal, Brazil, Venezuela, Peru, France and Thailand.

In 1999, he was appointed Canadian musical ambassador to China for the inauguration of the Montreal Park in Shanghai, and as soloist with the Shanghai Broadcast Orchestra in a national telecast. Mr. Merkelo made his New York debut at Lincoln Center with the New World Symphony Orchestra and Michael Tilson Thomas in 1998. He has also worked with conductors Leonard Bernstein, Charles Dutoit, Lorin Maazel, Sir Georg Solti and Valery Gergiev.

Mr. Merkelo's first solo recording, A Simple Song was ranked #1 in Quebec's classical recording chart in 2000. In 2004, Analekta released a highly praised second CD, Baroque Transcriptions, which was nominated by ADISQ for Best Classical Album of the Year.

Paul Merkelo attended the University of Illinois and Eastman School of music, where he was awarded the Speth Scholarship for outstanding orchestral musician. Mr. Merkelo is on the faculty at the Music Academy of the West in Santa Barbara, and McGill University. He is on the board of directors for the Youth Orchestra of the Americas (Canada), and is the founder of the Paul Merkelo scholarship. Paul Merkelo is a Yamaha artist.

Outdoor concert of the Montreal Symphony Orchestra with conductor Jean-François Rivest in the borough of Pierrefonds-Roxboro in August 2008.

There have been a number of organizations with this name, including one formed in 1897, which lasted ten years, and another formed in 1930, which lasted eleven. The current ensemble, however, traces its roots back to 1934; Wilfrid Pelletier formed an ensemble called Les Concerts Symphoniques which gave its first concert January 14, 1935, under conductor Rosario Bourdon. The Orchestra acquired its current name in 1954. In the early 1960s, as the Orchestra was preparing to move to new facilities at Place des Arts, patron and prominent Montreal philanthropist, John Wilson McConnell, purchased the 1727 Laub-Petschnikoff Stradivarius violin for Calvin Sieb, the Symphony's concertmaster.

Though it began touring and recording modestly in the 1960s and early 1970s under the batons of a young Zubin Mehta and Franz-Paul Decker, the OSM became a household name under the directorship of Charles Dutoit, who became music director in 1977 after the brief tenure and jolting departure of Rafael Fruhbeck de Burgos. Dutoit struck a friendship with a producer at London/Decca records named Ray Minshull, and a twenty-year collaboration was born.Throughout much of the 1980s and 1990s, Dutoit and the OSM released many well-received recordings and embarked on tours of North America, Europe, Asia, and South America. Most notable among this vast discography are the recordings of the French repertoire, especially the music of Maurice Ravel.

This section's tone or style may not reflect the encyclopedic tone used on Wikipedia. See Wikipedia's guide to writing better articles for suggestions. (February 2011)

In recent years, the OSM has fallen on tough times. The London/Decca recordings ceased in the late 1990s as the entire recording industry was turned upside-down, and the international tours dried up soon afterward. Then, in 2002, the OSM suffered the abrupt resignation of Charles Dutoit as music director. History has a tendency to repeat itself, and Dutoit's departure, like that of his predecessor Fruhbeck a quarter of a century earlier, occurred due to a minor spat pitting the ego of the individual against the ego of the collective. Here, the resignation was ultimately the result of an inflammatory public letter written by, Emile Subirana, the head of the Québec musicians' guild on behalf of the OSM's musicians. This letter, precipitated by Dutoit's decision to begin termination proceedings on two OSM musicians for artistic reasons, publicly aired years of bottled-up hostility, accusing Dutoit of being a tyrant and portraying the musicians as battered spouses.

In March 2003, the orchestra announced that Kent Nagano would be its new music director starting in 2006. He gave his first concert in Montreal as music director-designate March 30, 2005. Later in 2005, the OSM's musicians struck for the second time in less than a decade. Unlike the 1998 strike, which lasted a mere three weeks and was resolved largely due to the personal relationship between Dutoit and Lucien Bouchard, then the premier of Quebec, this much more acrimonious work stoppage lasted five months, ending shortly before Nagano's first scheduled concerts. Nagano made a good start, the OSM has finally moved into the new concert hall it had been hoping for since the early 1980s, and has begun recording again.

The OSM and Charles Dutoit have received accolades for their numerous recordings, including the Grand Prix du Président de la République (France) and the Prix mondial du Disque de Montreux. The OSM won Grammy awards in 1996 for its recording of Hector Berlioz' Les Troyens and in 2000 for Sergei Prokofiev and Béla Bartók piano concerti with Martha Argerich on EMI. It has additionally won a number of Juno Awards and Felix Awards. 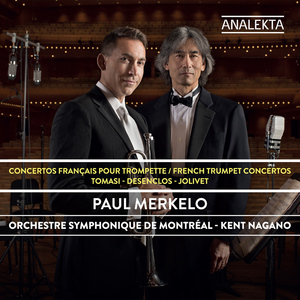 Paul Merkelo grew up listening to trumpet recordings by Maurice André (France), Wynton Marsalis (USA), and Timofei Dokshizer (Ukraine). It was the different sounds and styles that these players embodied on the trumpet that really sparked his passion and made him want to pursue becoming a classical trumpet player. This recording marks the culmination of childhood dreams and his current position as Principal Trumpet with the OSM for over 20 years. Paul Merkelo chose this French repertoire because it draws attention to a period in Europe that saw the liberation of its people at the end of World War II, and a rejuvenation of its soul through their artists, writers, and poets. This freedom of expression is clearly heard in the works of Henri Tomasi (1901-1970), Alfred Desenclos (1912-1971), and André Jolivet (1905-1974). Their interest in the sound of the trumpet and its ability to fit into a jazz idiom, as well as being a highly virtuosic instrument, gave birth to three of the most beautiful trumpet concertos. Very few recordings exist today, as they are renowned for being some of the hardest repertoire for this instrument.