Tony Award winner Patti LuPone is currently starring to critical acclaim on Broadway in John Doyle's new smash hit production of Sweeney Todd, opposite Michael Cerveris in the title role. Miss LuPone made her debut with the New York Philharmonic in a concert version of the Stephen Sondheim musical, before reprising her performance with the San Francisco Symphony, at the Ravinia Festival and on the Emmy Award winning PBS "Great Performances" telecast.

While appearing in Sweeney Todd, Miss LuPone went into a recording studio to record her latest solo CD The Lady With The Torch. Based on her latest sold-out Carnegie Hall concert which was conceived and directed by Scott Wittman, The Lady With The Torch will feature musical direction by Chris Fenwick and a 10 piece band performing an eclectic selection of torch songs, orchestrated by Jonathan Tunick. The CD will be released on April 25 by Ghostlight Records.

Last year Miss LuPone starred in the title role in the Marc Blitzstein's Regina, a musical version of Lillian Hellman's The Little Foxes at Washington D.C.'s Kennedy Center and reprised her critically acclaimed performance of Fosca in a concert version of Stephen Sondheim's Passion, starring with Audra McDonald and Michael Cerveris for Lincoln Center's American Songbook Series, which was also broadcast on PBS' Live From Lincoln Center. Around these engagements she performed a multi-city tour of her critically acclaimed theatrical concert Matters of the Heart, presented by Clear Channel Entertainment. She has toured Matters of the Heart throughout the United States and internationally, including runs at Australia's Sydney Festival, London's Donmar Warehouse Theatre and New York's Lincoln Center Theater. Her CD recording, based on this concert, was named one of 1999's best recordings by both The Times of London and Time Out. New York. On television, in addition to the Passion broadcast, she was featured, as herself, on the hit NBC comedy series Will & Grace and on the PBS "Great Performances" telecast of the NY Philharmonic's concert production of Leonard Bernstein's Candide.

During the previous season Patti LuPone garnered unanimous critical praise for her performance as La Mome Pistache in the City Center Encores! production of Cole Porter's musical Can-Canat New York's City Center and returned to the New York Philharmonic to co-star with Kristen Chenoweth in the Philharmonic's concert production of Leonard Bernstein's Candide.

In addition to The Lady With The Torch and Matters of the Heart, Miss LuPone also performs in a third solo concert, Coulda, Woulda, Shoulda. She made a triumphant solo concert debut at New York's Carnegie Hall in Coulda, Woulda, Shoulda resulting in a sold-out encore performance at Carnegie Hall, and performs the concert with major symphony orchestras around the country.

Patti LuPone's recent New York stage appearances include critically acclaimed performances in the smash hit Broadway revival of Michael Frayn's Noises Off, as Mrs. Lovett in the concert version of Stephen Sondheim's Sweeney Todd, in David Mamet's The Old Neighborhood, Terrence McNally's Tony Award-winning play Master Classand in her own concert Patti LuPone On Broadway, for which she won an Outer Critics Circle Award. During the past five summers in the Ravinia Festival's critically acclaimed Sondheim series, she has starred, in addition to Sweeney Todd, as Desiree in A Little Night Music, Fosca in Passion, Cora Hooper in Anyone Can Whistle, and was featured in two different roles in Sunday in the
Park with George.

After completing her training with the first class of the Drama Division of New York's Juilliard School, she began her career as a founding member of John Houseman's The Acting Company playing a variety of leading roles, both on and off-Broadway and on tour throughout the United States. Her subsequent New York dramatic credits include Dario Fo's Accidental Death of An Anarchist; David Mamet's The Water Engine, Edmond and The Woods; and Israel Horovitz' "Stage Directions." Miss LuPone's memorable performances on the New York musical stage include Vera Simpson in the City Center Encores! production of Pal Joey, Reno Sweeney in Anything Goes, (1988 Drama Desk Award, Tony nomination, Best Actress in a Musical), The Cradle Will Rock, Nancy in Oliver!, Evita(1980 Tony and Drama Desk Awards- Best Actress in a Musical), Working and Rosamund in The Robber Bridegroom (1976 Tony and Drama Desk Award nominations, Best Featured Actress in a Musical).

In London, she created the role of Fantine in the the RSC production of Les Miserables, a role she subsequently played on the West End. For that performance, as well as the reprise of her performance in the London production of The Cradle Will Rock, she won an Olivier Award for Best Actress in a Musical. Miss LuPone created the role of Norma Desmond in Sunset Boulevard(1994 Olivier nomination, Best Actress in A Musical), and recreated her Broadway performance of Maria Callas in the West End production
of Master Class.

The Lady With The Torch 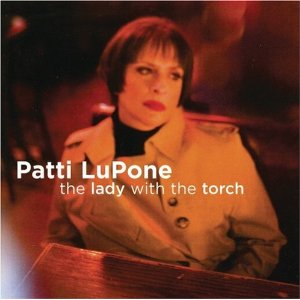 Ghostlight Records, a division of Sh-K-Boom, proudly releases Patti LuPone, The Lady With The Torch. Based on the concert by the same name, these Jonathan Tunick orchestrations on songs by composers and lyricists that include: Jule Styne, Sammy Cahn, Harold Arlen, Johnny Mercer, Cole Porter and the Gershwin brothers is complemented by stellar musical direction and production.

The Lady With The Torch
http://www.pattilupone.net/