Andrew Wan was named concertmaster of the Orchestre symphonique de Montréal (OSM) in 2008. As soloist, he has performed worldwide under conductors such as Vengerov, Petrenko, Labadie, Rizzi, Oundjian, Stern, and DePreist and has appeared in recitals with artists such as the

Chamber Music Society, the Metropolis Ensemble, and the New Orford String Quartet (NOSQ). In the fall of 2015, he released a live recording of all three Saint-Saëns violin concerti with the OSM and Kent Nagano under the Analekta label to wide critical acclaim, garnering an Opus Award and an ADISQ nomination. Mr. Wan graduated from the Juilliard School with three degrees and is currently Assistant Professor of Violin at the Schulich School of Music at McGill University, Artistic Director of the OSM Chamber Soloists, Artistic Director of the Prince Edward County Chamber Music Festival, and Artistic Partner of the Edmonton Symphony Orchestra. Andrew Wan performs on a 1744 Michel'Angelo Bergonzi violin, and gratefully acknowledges its loan from the David Sela Collection.

OSM Principal Viola, Neal Gripp has performed solo recitals at the Wigmore Hall in London, and the Town Hall and Alice Tully Hall in New York, among others. He has appeared as soloist with the OSM and the Ottawa and Winnipeg symphony orchestras. An active chamber musician, he has been Artistic Director of the Canadian Centre for Architecture Chamber Music Festival in Montreal and in related performances at the Getty Center in Los Angeles. Neal Gripp holds a doctorate from the Juilliard School of Music in New York and teaches at Université de Montréal. In 2012, he was awarded the Queen Elizabeth II Diamond Jubilee Medal.

Solo Cellist of the Orchestre symphonique de Montréal since 1999, Brian Manker enjoys a diverse and varied musical career as a performer and teacher. In addition to being a frequent concerto soloist with the OSM, Mr. Manker is also a member of the Juno and Opus award winning New Orford String Quartet. Currently on the faculty of McGill University's Schulich School of Music, Mr. Manker launched the Beethoven Project and founded the Adorno Quartet in 2007, which aimed to perform all the quartets of Beethoven in their proper context, the private salon. In 2010, he recorded the complete Bach Cello Suites. Brian Manker plays on a cello made by Pietro Guarneri of Venice ca. 1728–1730 and a bow made by Joseph René Lafleur ca. 1850, graciously loaned by the Canimex Foundation.

One of the most prominent double bassists of his generation, Ali Kian Yazdanfar maintains an active career not only as principal double bass of the Orchestre symphonique de Montréal, but also as a soloist, chamber musician, and pedagogue. Although he started playing the bass at seven years old, he didn't take the usual music school route to becoming a professional. In fact, his science and mathematics background led to a physics degree from the Johns Hopkins University, and, directly upon graduating, he won his first audition to become a member of the Houston Symphony. He went on to win his next three auditions, for the National Symphony in

Todd Cope was appointed Principal Clarinet of the Orchestre symphonique de Montréal in 2013. He was previously a member of the Vancouver Symphony Orchestra and a member of the New World Symphony in Miami Beach, Florida. As a concerto soloist, he has been featured with the Orchestre symphonique de Montréal, the Sudbury Symphony Orchestra, the New World Symphony, the Music Academy of the West, and the Eastern Music Festival Orchestra, among others. In addition, he has performed with the Sun Valley Summer Symphony, the Grand Teton Music Festival Orchestra, and the Scottish Chamber Orchestra, and has held fellowships at the Aspen and Eastern music festivals, the National Repertory Orchestra, the Music Academy of the West, and the American Institute of Musical Studies in Graz, Austria. He graduated from the College-Conservatory of Music at the University of Cincinnati, where he studied with Richie Hawley. Todd Cope also completed a professional studies certifi cate at the Colburn School, where he was a student of Yehuda Gilad. He is currently on the faculty of the Schulich School of Music at McGill University and is an exclusive Buffet Crampon and Vandoren performing artist.

Born in Montreal, Stéphane Lévesque has held the position of principal bassoon with the Orchestre symphonique de Montréal (OSM) since 1998. He has also held principal positions with the Canada's National Arts Centre Orchestra, the Buffalo Philharmonic Orchestra, and the Saito

Kinen Orchestra in Japan. Mr. Lévesque has appeared as soloist on several occasions with the OSM, as well as with ensembles including the Orchestre symphonique de Québec, the New World Symphony, Les Violons du Roy, and the U.S. Army Orchestra. Assistant Professor at the Schulich School of Music of McGill University, Mr. Lévesque has given master classes in numerous institutions throughout the world, including the Curtis Institute, the National School of Music (UNAM) in Mexico City, the Conservatoriums in Adelaide and Sydney in

John Zirbel has been Principal Horn of Orchestre symphonique de Montréal since 1979. A native of Janesville, Wisconsin, he began playing the horn at age nine. He graduated from the University of Wisconsin, where he studied with John Barrows and Douglas Hill. Mr. Zirbel enjoys teaching and mentoring talented young horn players both at McGill University's Schulich School of Music and at the Aspen Music Festival and School, where he serves as Principal Horn of the Aspen Festival Orchestra. As a soloist, Mr. Zirbel was a prize winner at the 1981 Grand Concours international de cor in Liège and has performed all the major horn concerti with the OSM. He especially enjoys bringing to life new works composed for him: in 2001 he gave the premiere of Sérénade héroïque, a horn concerto written for him by Quebec composer Jacques Hétu. In 2015 he premiered Cor et âme, a wonderful new work for horn and orchestra by Denis Gougeon. 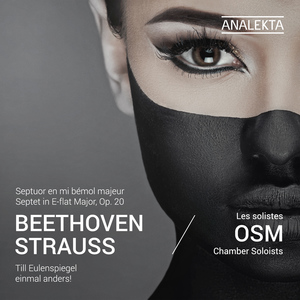 Under the artistic direction of Andrew Wan, principal violist of the OSM, this album highlights the great musical qualities of the musicians of the OSM in reduced formation: Andrew Wan on violin, Neal Gripp on viola, Brian Manker on cello, Ali Yazdanfar on bass, Todd Cope on clarinet, Stéphane Lévesque on bassoon and John Zirbel on horn.

The Septuor in E flat major, op. 20, by Ludwig van Beethoven and Till Eulenspiegel einmal anders !, arrangement by Franz Hasenöhrl of the symphonic poem Till Eulenspiegel, op. 28, by Richard Strauss allows us to appreciate the mix of timbres of three important orchestral groups of the orchestra: strings, woodwinds and brass. After the Septuor, where the musical texture remains finely chiseled thanks to the variety of timbres, we marvel at Hasenöhrl's ingeniousness to suggest an entire orchestra with only five instruments. Together, these two works constitute a program where predominates a certain lightness - embellished with a touch of humor.