Founded in 1934 by a group of devoted music lovers, with the backing of the Quebec Government, the Orchestre symphonique de Montreal is one of the major cultural organizations of the city whose name it bears with pride.

The music directors who have contributed to its growth and success are Wilfrid Pelletier, a Montrealer by birth and conductor at the Metropolitan Opera in New York who became the first Artistic Director of the OSM; Desire Defauw; Igor Markevitch; Zubin Mehta, who guided the OSM from 1961 to 1967, bringing increased prestige to the Orchestra since under his direction the OSM began its touring career in Europe; Franz-Paul Decker; Rafael Fr?hbeck de Burgos; Charles Dutoit, from 1977 to 2002, with whom the OSM assumed an important place on the international stage; and, since September 2006, Kent Nagano.

The Orchestra has toured in Asia seven times, visiting Japan on six of those, and has toured Europe on nine occasions and South America twice. The OSM has also performed at the Hollywood Bowl, as well as the Ravinia and Tanglewood festivals. Moreover, since 1982 the Orchestra has been an almost annual visitor to Carnegie Hall, where it plays to packed houses.

In 2006 the OSM offered a concert at the Paris Theatre du Chatelet, its first international concert with Kent Nagano. In April 2007 the Orchestra completed its first coast-to-coast Canadian tour, placed under the direction of Kent Nagano. They made their Carnegie Hall debut in March of 2008, and will embark on a multi-city tour of Japan and South Korea this coming April.

The OSM has produced 95 recordings, earning 47 national and international awards, including two Grammys. 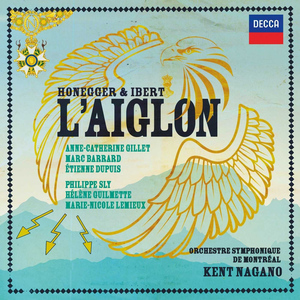 Decca and the Orchestre symphonique de Montréal (OSM),one of the finest partnerships in recording history, present a rare delight for opera fans with the world premiere recording of L'Aiglon. The double-disc set's release in March 2016 marks the launch of a new multi-album contract intended to enhance the OSM's award-winning Decca discography. L'Aiglon, by Arthur Honegger and Jacques Ibert, is brought to life by an outstanding cast of French and French-speaking singers under the baton of Kent Nagano, the OSM's critically acclaimed Music Director since 2006. The five-act lyrical drama was recorded in March 2015 at the time of its North American premiere at the orchestra's new home, the Maison symphonique de Montréal.