One of the hottest properties in classical music, MILOŠ came to international attention in 2011 with his debut album The Guitar (Mediterráneo) which, in the space of just a few months, topped classical charts around the world, became an internationally best selling sensation and earned Miloš Gramophone's prestigious Young Artist of the Year Award.

As an exclusive Deutsche Grammophon recording artist, Miloš Karadaglić released his second album Latino (Pasión) in 2012 and went on to receive both Classic Brit (UK) and Echo Klassik (Germany) awards. Reviewing the album Gramophone commented "Karadaglić is a guitarist of superior musical and technical gifts who allows his personality to sing through the music with taste and intelligence" and The Daily Telegraph added "this new Latin American programme is outstanding in its finesse, warm sensuality and sheer beauty."

Latino proved so successful that it was subsequently re-released as Latino GOLD featuring 30 minutes of newly recorded tracks from a wealth of Latin American inspired music. Meanwhile MILOŠ: HEARTSTRINGS, a documentary filmed throughout 2012 and which charts the guitarist's story to date, has been released on DVD and aired on numerous TV stations.

2012/13 was the breakthrough year on the concert stage for Miloš with sold-out debut performances and tours around the word. "Part of the reason Karadaglić has such a large following "commented the Western Australian "is his ability to straddle both hardcore classical and pop classical camps." This was echoed by the London press following his celebrated Royal Albert Hall debut of which The Guardian commented "More extraordinary by far, however, was the way a single guitarist, playing an intimate and understated set, and equipped with a single microphone and some clever lighting, could shrink the Hall's cavernous space into something so close." The Independent concluded: "Defying its many critics to offer a dramatic and rounded evening of classical music, the guitar itself was the breakout star here – a sleight of hand that makes Karadaglić not only a magician, but a serious and accomplished musician".

Miloš' passion for the guitar is matched with an intuitive sense of how to bring the instrument across to his public – whether it be for an audience of 3000 in the Royal Albert Hall or an intimate chamber music performance for 100 people. He enjoys performing in the major concert halls as much as in non traditional venues such as New York's Le Poisson Rouge, London's Camden Roundhouse (iTunes Festival) and Deutsche Grammophon's Yellow Lounge club nights in London, Berlin, Amsterdam, Madrid, New York and Seoul.

The 2013 - 2014 season promises to take  Miloš to new heights, with extensive tours throughout Europe, America and the Middle East, in recitals and concerto performances, as well as appearances at prestigious festivals such as Cheltenham (UK) , Ravinia (USA), Gstaad (Switzerland), Rheingau and Mecklenberg Vorpommern (Germany).

His much anticipated third album on Deutsche Grammophon/Mercury Classics will be released in Spring 2014 and includes Rodrigo's Concerto de Aranjuez and Fantasia para un Gentilhombre, recorded with Yannick Nézet-Séguin and the London Philharmonic Orchestra.

Born in Montenegro in 1983, Miloš Karadaglić first started playing the guitar at the age of 8. When he was 17 he successfully applied for a scholarship to study at the Royal Academy of Music and moved to London where he continues to live while keeping close ties with his family and homeland.  Miloš is a passionate supporter of music education and acts as a Patron of the Mayor of London Fund for Young Musicians and the charity Awards for Young Musicians.  He uses D'Addario J 46 strings and plays a 2007 Greg Smallman guitar, kindly lent to him by Paul and Jenny Gillham. 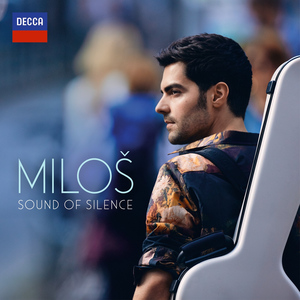 Miloš is back with his fifth studio album, and his first recording since 2016, poignantly titled Sound of Silence which is set to release September 13 on Decca Classics. Last time we saw the Montenegrin-born and London-based classical guitarist, his Beatles album Blackbird had been received with unanimous acclaim, his new record was already in development, and a major international concert tour was booked. It was then that Miloš was struck by an inexplicable but devastating hand injury. Unable to play, he was forced to pull out of multiple engagements and studio dates, with no real sense of when or if he might recover.