Grammy ® award winning composer Michael Daugherty is one of the most commissioned, performed, and recorded composers on the American concert music scene today. His music is rich with cultural allusions and bears the stamp of classic mod ernism, with colliding tonalities and blocks of sound; at the same time, his melodies can be eloquent and stirring. Daugherty has been hailed by The Times (London) as "a master icon maker" with a "maverick imagination, fearless structural sense and meticulous ear."

Daugherty first came to international attention when the Baltimore Symphony Orchestra, conducted by David Zinman, performed his Metropolis Symphony at Carnegie Hall in 1994. Since that time, Daugherty's music has entered the orchestral, band and chamber music repertory and made him, according to the League of American Orchestras, one of the ten most performed living American composers. In 2011, the Nashville Symphony's Naxos recording of Daugherty's Metropolis Symphony and Deus ex Machina was honored with three GRAMMY® Awards, including Best Classical Contemporary Composition.

Born in 1954 in Cedar Rapids, Iowa, Daugherty is the son of a dance-band drummer and the oldest of five brothers, all professional musicians. He studied music composition at the University of North Texas (1972-76), the Manhattan School of Music (1976-78), and computer music at Pierre Boulez's IRCAM in Paris (1979-80). Daugherty received his doctorate from Yale University in 1986 where his teachers included Jacob Druckman, Earle Brown, Roger Reynolds, and Bernard Rands. During this time, he also collaborated with jazz arranger Gil Evans in NewYork, and pursued further studies with composer György Ligeti in Hamburg, Germany (1982-84). After teaching music composition from 1986-90 at the Oberlin Conservatory of Music, Daugherty joined the School of Music at the University of Michigan (Ann Arbor) in 1991, where he is Professor of Composition and a mentor to many of today's most talented young composers.

Daugherty has received numerous awards, distinctions, and fellowships for his music, including a Fulbright Fellowship (1977), the Kennedy Center Friedheim Award (1989), the Goddard Lieberson Fellowship from the American Academy of Arts and Letters (1991), fellowships from the National Endowment for the Arts (1992) and the Guggenheim Foundation (1996), and the Stoeger Prize from the Chamber Music Society of Lincoln Center (2000). In 2005, Daugherty received the Lancaster Symphony Orchestra Composer's Award, and in 2007, the Delaware Symphony Orchestra selected Daugherty as the winner of the A.I. DuPont Award. Also in 2007, he received the American Bandmasters Association Ostwald Award for his composition Raise the Roof for Timpani and Symphonic Band. Daugherty has been named "Outstanding Classical Composer" at the Detroit Music Awards in 2007, 2009 and 2010. His GRAMMY® award winning recordings can be heard on Albany, Argo, Delos, Equilibrium, Klavier, Naxos and Nonesuch labels.

Recent recordings include the 2013 Naxos release of Mount Rushmore with the Pacific Symphony Orchestra and Chorale conducted by Carl St.Clair.  Current commissions include a concerto for violinist Nadja Salerno-Sonnenberg and the New Century Chamber Orchestra (2013), a concerto for percussionist Evelyn Glennie and the WDR Sinfonieorcheste Köln (2014) and a cello concerto for Zuill Bailey and the Nashville Symphony (2015). 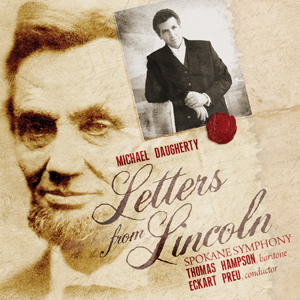 E1 Music is delighted to announce the release of Letters from Lincoln, the world-premiere recording of a work by composer Michael Daugherty featuring the world-renowned baritone Thomas Hampson and the Spokane Symphony under the direction of music director Eckart Preu. Letters from Lincoln for baritone and orchestra is scheduled for release in January of 2010. This new work was commissioned by the Spokane Symphony in celebration of the 200th anniversary of Abraham Lincoln's birth (1809-1865), and premiered on February 28, 2009. Also included on the record are two lyric early works by Anton von Webern, Im Sommerwind and Langsamer Satz.