2009 – March release of Past & Present – The Very Best Of Michael Ball which goes top ten in first week; performs in West End production of Hairspray till July; UK tour September/October 2009.

2010 – Tours the UK as Edna Turnblad in Hairspray; continues to front his own BBC Radio 2 show; debuts as TV chat show host on August 16th on ITV1 with The Michael Ball Show; records tracks for his new album, Heroes, for release March 2011; Hairspray tour continues in Dublin and Edinburgh; Love Story opens at the Duchess Theatre in London's West End on December 6th with Michael as producer.

2011 – January to March Michael Ball's Sunday Brunch on BBC Radio 2; March new cd Heroes released through Universal Music TV.  On March 21st Michael and Imelda Staunton co-present the 2010 Olivier Awards which are held at the Grosvenor House Hotel.  On May 1st, after an incredible 57 weeks on the road, Hairspray comes to a magnificent end in Bristol.  Michael's UK and Ireland concert tour Heroes Live follows; dates include two nights at the Royal Albert Hall.

2012 – February 26th at the Savoy Theatre, Michael performs at an evening of music, comedy, poetry in aid of Mane Chance Sanctuary and Shooting Star CHASE, hospice care for children and teenagers of which Michael is a patron.

Sweeney Todd opens at the Adelphi Theatre on March 20th to outstanding reviews:

"Michael Ball has redefined his career with the performance of his life."

"The performance of a lifetime from Michael Ball as the Demon Barber."

"If you think you know Michael Ball, think again. The popular lyric baritone is almost unrecognizable as the demon barber of Fleet Street. It's a chilling performance, sinister and saturnine. He is a revelation."

"Jonathan Kent's production leaves me grasping for superlatives.  This is a superb achievement that proves that Sondheim's musical thriller has genuine social resonance."

"A dark, glinting treat.  Michael Ball is a revelation."

"It's horrifically enjoyable – not to be missed under any circumstances!"

"Two of Britain's finest stage talents at the peak of their game."

April 28th – Michael wins the OLIVIER for Best Actor in a Musical for ‘Sweeney Todd'.

May 13th – release of new single ‘Fight the Fight' written by Tim Rice.

Michael Ball has won critical and public acclaim over the last 25 years with his dynamic, award-winning lead roles in the West End and on Broadway.  And, with his concurrent career as a multi-platinum recording artist, top selling live concert performer and radio and television broadcaster, the Olivier-Award winning Ball has been, for many years, in the enviable position of combining these individual aspects of showbusiness with continuing success.

Michael is a hugely successful concert artist; he has performed many times in theatres and venues across the UK as well as Australia, the US and the Far East.  His many television shows have included Michael Ball, An Evening With Michael Ball, The Michael Ball Show and, for BBC Radio 2, Ball Over Broadway, Michael Ball's Sunday Brunch and the 2012 six part series, Songwriting Partnerships.

In August 2007 Michael made his BBC Proms debut with An Evening With Michael Ball at the Royal Albert Hall which marked the first time a musical theatre star had been given a solo concert at the classical music festival.  Michael also performed at the 10th anniversary concert of Les Miserables at the Royal Albert Hall and the show's 25th anniversary concert at the 02 Arena.

As a young boy, Lancashire-born Alfie Boe (from the fishing port of Fleetwood) dreamed of a career as a singer. Having conquered the world's most prestigious opera stages, led the cast of Les Miserables for nearly a year, and stolen the show at the Queen's Diamond Jubilee Concert at Buckingham Palace, he has certainly succeeded. Always striving to bring good music to different audiences, after three sold-out UK Tours (including the Royal Festival Hall and the Royal Albert Hall), Boe has hundreds of thousands of fans, having achieved Platinum album sales in the UK, and four top ten album placings.

Alfie continues to impress, even outside the concert hall and recording studio. Earlier this year he appeared on our small screens, starring in ITV's biggest programme of the winter, Mr Selfridge, as music-hall singer Richard Chapman, and last year saw the release of his best-selling autobiography, My Story. Yet amid his ever increasing celebrity status, Alfie will always be part of the classical world – he was recently awarded with a Fellowship of the Royal College of Music. Music is Alfie's first love, and this album reminds us why he is loved in return.

Britain's favourite tenor brings us the magjc and romance of the Italian Riviera with the release of his eagerly-awaited new album Serenata, on 17th November. Serenata, which means ‘to sing in your honour', is a beautiful collection of romantic Italian songs, perfectly suited to Alfie's distinctive voice. With the glowing nostalgia of these hugely popular tunes, Alfie Boe not only reminds us of the extraordinary impact made in the ‘50s of these Italian numbers, songs or this music, but also why Alfie he has become the biggest-selling British tenor of today. 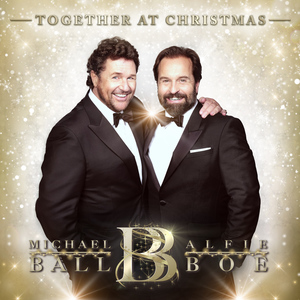 They're back! Just in time for the festive season! Musical duo Michael Ball and Alfie Boe have joined forces again for a magical new album ‘Together at Christmas', out now on Decca Records.

Two of the greatest voices in the world, Michael and Alfie are back doing what they love the most, but this time with an album packed full of holiday cheer! 2020 has been a year of isolation and social distancing and Michael and Alfie want to make this holiday season special, however you're together at Christmas.

The record has everything you could want from a Christmas album, and more. The pair breathe new life into favourites such as ‘It's Beginning to Look A Lot Like Christmas', ‘Silent Night' and ‘Have Yourself A Merry Little Christmas', to name a few. Gregory Porter joins on ‘The Christmas Song', and the duo perform the heart-warming ‘My Christmas Will Be Better Than Yours' – a brand new original song.