The trio is one of the brightest stars of the Polish jazz scene, recognised for their unique talent in blending tradition with contemporary sound.

The band combines the grand tradition of the challenging piano trio tenet and creates their own distinct sound in doing so. It is also one of the most consistently developing bands of the Polish music scene, and one that is very open to inspiration from the surrounding environment. The Marcin Wasilewski Trio is considered one of the most acclaimed and unique jazz formations of its generation, and it has garnered recognition in its native Poland as well as abroad.

In 2019, the band will celebrates 25 years of playing in an unwavering squad. But its actual history goes back even further, to the year 1990. It was then that the Simple Acoustic Trio was founded by a group of students from a music high school in Koszalin. Their debut performance would come a year later, and the band quickly began to garner awards across Poland. In 1993, the young percussionist Michał Miśkiewicz (the son of renowned Polish saxophonist Henryk Miśkiewicz) joined the Simple Acoustic Trio and since then the group plays together untouched by any personal disturbances.

Their very first record Komeda came out in 1995, published by the Kraków based Gowi Records label. It became one of the most widely commented debuts of the year. An homage to the work of Krzysztof Komeda, it consisted entirely of his compositions. The critics and audience alike didn't fail to hear in the recordings much more than mere interpretations of the historic pieces of Polish jazz. The reviews hailed the trio a creative continuation of this history, and one of the biggest promises of the Polish jazz scene.

"IN THE ENTIRE HISTORY OF POLISH JAZZ THERE WAS NO GROUP LIKE THIS ONE." - TOMASZ STAŃKO

Their music soon stirred the curiosity of Tomasz Stańko, the legendary Polish trumpet player. In the late 1990s, Stańko was searching for a new quartet squad, one that would allow him to pursue the kind of work he did with Bobo Stenson, Anders Jormin and Tony Oxley. The encounter with Tomasz Stańko turned out to be a turning point in the trio's career. Stańko was quoted as saying that „In the entire history of Polish jazz there was no group like this one".

The cooperation with Tomasz Stańko was officially launched between 1999 and 2000, and it was preceeded by occasional concert collaboration between Stańko and Wasilewski. The Simple Acoustic Trio had gained a mentor in Stańko and cooperated with him as a working band. This cooperation soon lead to recording with one of the world's leading labels, the Munich-based ECM.

Together with Stańko they recorded three albums with the ECM: Soul of Things (2002), Suspended Night (2004) and Lontano (2006). They also made three concert tours across the US, performing in some of America's best jazz stages: Blues Alley in Washington, Merkin Hall and Birdland in New York. Stańko and the trio also played at the San Fransisco Jazz Festival and the Earshot Jazz Festival in Seattle.

Although the musicians were very actively engaged in making music together, and their career was gaining speed, the actual name Simple Acoustic Trio was less and less heard of. The last album they recorded under the old name was Habanera, released by the Not Two Records label in Kraków in May, 2000.

The musicians would return to the stage as an independent trio five years later, and it was a splendid beginning. The album Trio was once again recorded by ECM and after since its release in 2005, two more albums followed: January (2008), and Faithfull (2011), both of which were also released by ECM. Faithfull gained the status of a double platinum record and it was a huge artistic success.

Since their very beginnings, the group has been building its position with numerous prizes, among them the many Fryderk awards of the Polish Music Academy. In 2010, the Marcin Wasilewski Trio also won the annual readers' poll of the Jazz Forum magazine for the Best Acoustic Formation in Poland, gaining nearly twice as many votes as the Tomasz Stańko quintet.


One of the most celebrated saxophonists of his generation, Joe Lovano is a highly expressive improvisor whose lithe, swinging style incorporates traditional bop influences with modal and free devices. A Cleveland native, Lovano first came to prominence in the early '90s, and issued a handful of highly regarded albums for Blue Note, including 1993's Universal Language, 1996's Celebrating Sinatra, and 2000's 52nd Street Themes, the latter of which took home the Grammy Award for Best Large Ensemble Jazz Album. He has remained at the forefront of post-bop jazz, ably paying homage to his idols, as on 2011's Charlie Parker-inspired Bird Songs, and recording with like-minded contemporaries on Sound Prints: Scandal with trumpeter Dave Douglas.

Born Joseph Salvatore Lovano in 1952 in Cleveland, Ohio, Lovano was first introduced to the saxophone by his father, respected Cleveland saxophonist Tony "Big T" Lovano. Along with his father's instruction, Lovano would hear many of the prominent jazz artists who passed through town, including Dizzy Gillespie, James Moody, Sonny Stitt, and Rahsaan Roland Kirk. He progressed quickly and began playing in local jam sessions while still in his teens. Although steeped in the bebop tradition, he also developed an interest in experimental jazz of the '60s, listening to such musicians as John Coltrane, Jimmy Giuffre, and Ornette Coleman. After high school, Lovano honed his skills at Boston's Berklee School of Music, where he brushed shoulders with such future collaborators as John Scofield, Bill Frisell, and Kenny Werner.

Tones, Shapes and ColorsGraduating Berklee, Lovano found work with organists Lonnie Smith and Jack McDuff. He also toured with Woody Herman from 1976 to 1979, after which he settled in New York City. There, he joined drummer Mel Lewis' Village Vanguard Orchestra (playing with the band from 1980 to 1992). During this period, he also worked with Elvin Jones, Carla Bley, Lee Konitz, Charlie Haden, and Bob Brookmeyer, among others. Beginning in 1981, he was a regular member of drummer Paul Motian's band (which included his Berklee classmate Frisell), and played with guitarist John Scofield's quartet. In 1985, Lovano made his recorded debut as a leader with Tones, Shapes & Colors on the Soul Note label, playing alongside pianist Ken Werner, bassist Dennis Irwin, and drummer Lewis. A handful of albums followed for the label including 1987's One Time Out and 1988's Village Rhythm.

From the SoulIn the early '90s, Lovano's profile began to rise after he signed with Blue Note, making his debut for the label with 1991's From the Soul, a hard-hitting quartet date with pianist Michel Petrucciani, bassist Dave Holland, and drummer Ed Blackwell. The similarly swinging Landmarks arrived later that year, and featured guitarist John Abercrombie, pianist Ken Werner, bassist Marc Johnson, and drummer Bill Stewart. Lovano then featured his wife, vocalist Judi Silvano, on 1992's Universal Language, and picked up his first Grammy nomination for 1993's Tenor Legacy. Silvano also contributed to 1994's Rush Hour. The saxophonist's 1995 album, Quartets: Live at the Village Vanguard, picked up yet another Grammy nomination, and was named Jazz Album of the Year by readers of Down Beat magazine. He then paid homage to the work of vocalist Frank Sinatra on 1996's Celebrating Sinatra (on which Judi Silvano also appeared).

Joe Lovano: Viva CarusoIn 2000, he took home his first Grammy Award win for Best Large Jazz Ensemble Album with 52nd Street Themes, in which he interpreted the music of bop-era stalwarts like Tadd Dameron, Charlie Parker, and Thelonious Monk. Lovano then drew from his Italian heritage, playing music associated with legendary opera tenor Enrico Caruso on 2001's Viva Caruso. In 2004, he released the ballads album I'm All for You, featuring pianist Hank Jones. Jones was also on board for 2005's Joyous Encounter, which included bassist George Mraz and drummer Paul Motian.

Streams of ExpressionThe ambitious Streams of Expression appeared in 2006 and featured the five-part "Streams of Expression Suite" and the three-part "Birth of the Cool Suite" (conducted by Gunther Schuller), the latter of which drew inspiration from Miles Davis' 1948-1950 Nonet recordings. Lovano again paired with Jones for 2007's Kids: Duets Live at Dizzy's Club Coca-Cola, and joined the WDR Big Band and Rundfunk Orchestra for 2008's Symphonica. Folk Art arrived in 2009 and featured his Us Five quintet. Two years later, he celebrated his 20-year association with Blue Note by releasing the Charlie "Yardbird" Parker tribute album Bird Songs. He then returned in 2012 with his third album featuring the Us Five quintet, Cross Culture. 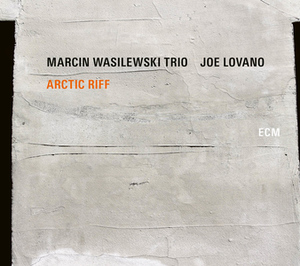 The first-time teaming of Poland's dynamic Marcin Wasilewski Trio and big-toned US tenorist Joe Lovano brings forth special music of concentrated, deep feeling, in which lyricism and strength seem ideally balanced. The alliance plays four new tunes by Marcin and one by Joe, as well as Carla Bley's classic "Vashkar" plus collective improvisations with strong input from all four players;  Slawomir Kurkiewicz's bass skills are particularly well-deployed in the spontaneous piece "Arco".