Mak Grgić is an innovative player, who programs music as far reaching as works from the avant-garde, film music to the great classics of guitar repertoire and transcriptions of Brahms and Kreisler.

His new recording on Marquis Music entitled Cinema Verismo focuses on music used in cinema over the last few decades, which mixes classical works used in films and transcriptions of cinematic scores. The CD includes Asturias by Albeniz, for which one critic stated that "Grgic did an excellent job of catering to the expectations of the audience while still make the piece his own." Cinema Verismo also offers music ranging from films such as The Godfather, The Good, the Bad and the Ugly, Volver, The Mission, West Side Story and Chariots of Fire.

Mak, a Young Artist in Residence at The Da Camera Society of Los Angeles, is a co-founder of DC8, Da Camera's contemporary music ensemble, which strives to expand the definition of what a modern music ensemble can be. In particular, it makes use of the acoustic guitar and brings to the fore a mixture of a classic Pierrot Ensemble and the drums and bass used in the Bang on a Can All-Stars. In February 2014 the group will premiere a newly commissioned work from the renowned American composer Michael Gordon, co-founder of Bang on a Can of New York City.

His collaborators have so far included Martin Chalifour (Concertmaster of The Los Angeles Philharmonic), cellist Jay Campbell, Joshua Roman, The Assad Brothers, Ashley Bathgate (cellist of the Bang on a Can All-Stars), John Sant'Ambrogio (former principal cello of the St. Louis Symphony Orchestra), flutist Christopher Matthews, Paul Vasile and Stephen Ackert on the organ, guitarists Christopher McGuire and Taso Comanescu, percussionist Ian Rosenbaum, and guitarist-composer Nejc Kuhar, with whom Mak made his first album, sponsored by The National Radio of Slovenia and the Ministry of Culture in Slovenia.

Grgic has performed with orchestras such as the Spokane Symphony at The Festival at Sandpoint under Maestro Gary Sheldon, conductor of The Miami City Ballet, as well as the festival orchestra at Lancaster Festival, The RTV Slovenia Symphony Orchestra under Maestro Ivo Lipanovic, the Croatian Chamber Philharmonic with Maestro Mladen Tarbuk, the SNG Maribor Symphony Orchestra under Maestro Simon Krecic and St. Petersburg Symphony with conductor Vladimir Lande, former principal oboe of The St. Petersburg Philharmonic.

Recent and upcoming recitals include the Sarasota Guitar Society, Austin Classical Guitar in recital with Martin Chalifour, two appearances at the Allegro Guitar Series in Texas, the University of Las Vegas in Nevada, the National Gallery of Art in Washington D.C., the Newman Center for Performing Arts, Denver in performance with the Assad Brothers and cellist Joshua Roman for a show called Strings on Fire, Strathmore Hall in North Bethesda, MD, Pepperdine University as a guest of Christopher Parkening, Portland Classical Guitar, Guitar Festival Mikulov, Triangle Guitar Society, Piran Music Nights and The Sounds of Six Strings, Cankarjev Dom, Slovenia as well as Lyrica Chamber Music Society in New Jersey with Ashley Bathgate, and percussionist Ian Rosenbaum in a program entitled Bach in a Fresh Context, combining Bach with Michael Harrison and Philip Glass, Arts at the Park in NYC and the New York Classical Guitar Society.

Other dates have included performances at the Grande Auditorium di Espinho, Espinho and Teatro di Fafe, Fafe Municipality in Portugal, Teatro Cervantes de Bejar, Salamanca, Castile-Leon in Spain, International Music Council of the European Broadcasting Union in an all instrument "New Talent" Competition in Bratislava, representing the Republic of Slovenia as well as The Dallas Opera with Chamber Orchestra in performances of Peter Maxwell Davies' The Lighthouse.

Mak is a passionate advocate for new music and has therefore premiered numerous new pieces, including the music of Nina Senk with JACK Quartet, the music of David Crowell, a new version of Toby Twining's 9/11 Blues, Michael Harrison's Hijaz Prelude, in a version for guitar and cello, and music by Christian Carey, Julia Adolphe, Thomas Kotcheff, Sven-David Sandström, Hakki Cengiz Eren, and William Harvey, who is presently living in Afghanistan.

He has been interviewed around the world by magazines, newspapers and radio stations such as KPBX in Spokane, Washington, Sarasota Public Radio, UNIVOX and National Radio in Slovenia, National TV and Radio in Croatia, Thüringische Landeszeitung in Germany, Jutarnji List in Croatia, the popular family magazine Jana in Slovenia, the Columbus Dispatch in Ohio, Classical Guitar Magazine in the UK and Il Messaggero and Chitarra Classica in Italy.

Born in Ljubljana, Slovenia, he studied guitar in Zagreb with the revered Ante Cagalj at the Elly Basic Conservatory of Music and obtained his Bachelor's Degree with Alvaro Pierri at the Universitaet fuer Musik und darstellende Kunst in Vienna, Austria. At the moment he is pursuing his Doctoral Degree at the USC Thornton School of Music as a student of William Kanengiser and Scott Tennant of the Los Angeles Guitar Quartet. He is also a teaching assistant at USC under the direction of Brian Head. His charitable activities include fundraising for Bosnian children with financial issues, including a recent recital in Zenica, BIH, where funds were raised for a local orphanage.  Mak currently plays a Jose Ramirez guitar MC made in 1966 in Madrid. 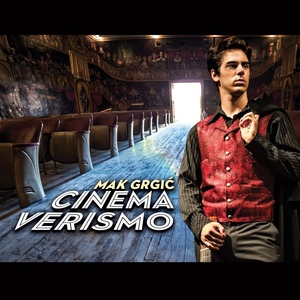 Mak Grgić, has quickly established himself as one of today's top guitarists. His debut Marquis Music recording: Cinema Verismo, from presents a new approach for solo guitar music showcasing brilliant performances of age-old classical selections, such themes from The Godfather, The Good, the Bad and the Ugly, Volver, The Mission, West Side Story and Chariots of Fire. Grgić displays a powerful expressive range and a highly inventive combination of bravura, precision, and deep expression. One will be astonished by the reocording's flow and beauty as well as the striking quality of sound achieved on the variety of guitars used in this recording.