Magos Herrera is the Cassandra Wilson of Latin America. There are similarities in their warm, sultry tone, their bluesy feeling and strong command of the jazz language. Herrera is without a doubt the best jazz singer out of Mexico, and with México Azul she is establishing herself among the best singers in jazz." This is what jazz connaisseur and journalist Wilbert Sostre penned in his review about the album México Azul for the acclaimed music magazine Jazz Times.

Born in Mexico City and currently based in New York City, Magos Herrera is considered one of the most beautiful voices and most active vocalists in the contemporary Latin American jazz scene. She is known for her beguiling rhythmic scatting and deep captivating singing. Besides Herrera is a dazzling accomplished singer songwriter who is immensly popular throughout Mexico and Latin America.

Magos' career starts in 1992 when she graduates from the Musicians Institute in Los Angeles. Herrera stays firmly rooted in tradition of different Latin American and Iberic backgrounds. She blends them with the refinement and sophistication of jazz, interpreted through her unique artistic vision. Fluent in Spanish, Portuguese and English, her repertoire is filled with the yearning romance, intimacy and enchantment.

While living in Mexico City, Herrera releases five albums including Orquideas Susurrantes (2000), Pais Maravilla (2002) and Soliluna (2006), the latter which she records with Mexican singer Iraida Noriega. Magos gets nominated twice for Lunas del Auditorio Nacional (2006-2009) in the category Best Jazz Concert Of The Year among the likes of jazz greats Bobby McFerrin and Bill Frisell.

In 2008 Herrera moves to New York, to develop her artistic ambitions. She promptly becomes part of the local scene after performing a highly successful concert at the New York Winter Jazz Festival. Magos records with saxophonist Tim Ries for his album Stones World: The Rolling Stones Project II (2008) and with contemporary composer Paola Prestini.

In 2009 Magos releases the album Distancia to high critical acclaim. Co-produced by Tim Ries featuring pianist Aaron Goldberg and guitarist Lionel Loueke, it becomes #1 in the iTunes jazz category and earns her a Grammy nomination for Best Jazz Vocal Album. In 2011 México Azul sees the light of day, again co-produced by Ries and recorded with New York hot shots John Patitucci, Luis Perdomo and Alex Kautz. The album pays tribute to Mexican composers from the golden era in the 30's and 40's. It wins rave reviews.

In 2012 the excellent compilation Lo Mejor de Magos Herrera is released. In the summer of 2013 Magos records with multple Grammy winner, producer and guitarist Javier Limon on the album Dawn due for release in the first half of 2014 by Sony's OKeh Records label.

The succes of Distancia and México Azul got Magos booked at important jazz festivals and venues around the world including The United States, China, Canada, México, Puerto Rico, Spain, The Netherlands, India, Malaysia and Singapore. In May 2013 she also performs with pianist Elio Villafranca at the Chick Corea Festival held in Lincoln Center, New York.

In New York Magos hosts her own radio show La Vuelta a La Manzana for Mexican public radio IMER Horizonte 107.9FM in which she shares her joy for music and talks with the best artists from today's jazz scene. In México Herrera produced and hosted two TV shows for several seasons, promoting music for Mexico's TV channel 22. It featured artists like Jerry Gonzalez, Diego el Cigala and Francisco Cespedes.

US latin magazine Siempre Mujer featured Herrera along side Michelle Obama as one of the top 10 women in 2011 for her outstanding work as a musical ambassador for Mexican contemporary music. Currently Magos is a recipient of the Mexico National Grant Program for Performing Artist 2010-2013 given by the National Fund for Culture and the Arts (FONCA). She also supports as a spokesperson for the UN campaign UNITE to stop violence against women.

Javier Limón
It's seven p.m., in an indistinguishable neighborhood bar in New York City. There's a man sitting alone with a cup of coffee, his guitar leaning against the wall. A tall, thin, young woman with a slow, elegant gait walks through the door. Without saying a word she approaches him, and sits down next to him.

This could be the opening scene of a novel or a French thriller from the 50s, but in reality, it is the start of an extraordinary musical adventure; a first encounter between two musicians destined to fall in love.

Magos Herrera, renowned Mexican-born jazz singer and resident of New York City, has worked with the best jazz musicians from around the world for many years combining her Latin roots with the sound of contemporary American jazz, thus, positioning herself among a musical elite.

The man sitting in the bar, Javier Limón, is a laureate composer, guitarist and internationally recognized producer known for his collaboration with Paco de Lucia, Bebo and Chucho Valdés, Avishai Cohen and Wynton Marsalis, among others. He has become an indispensable reference in the genre of Flamenco and it's role in future international music.

DAWN represents an encounter between the profound, sophisticated voice of Magos Herrera and the intricate Flamenco guitar of Javier Limón. The convergence of vanguard jazz and minimalist Flamenco, a summit of sound for the 21st century.

DAWN is an intimate trek through a repertoire of select American and Latin jazz masterpieces including songs such as Afro blue, Skylark and Blue in Green by Miles Davis and O que tinha de ser (What Has to Be) by Antonio Carlos Jobim, among others, while flirting with some new and surprisingly original compositions by the duo.

Be it in English, Spanish or Portuguese, the self-control of Magos' interpretation and the power of her words and voice combined with Limón's refined simplicity and harmony, in addition to the careful rendering of this project make DAWN a cutting-edge, revolutionary approach to Flamenco-jazz.

A blanket of silence in the air, fragile words, glances and emotions which mark the momentum of the recording production coupled with a live performance experience give pause to time, affording a trek through an eternal DAWN. Read more Biography  Magos Herrera

Flamenco Guitar "Magos Herrera is the Cassandra Wilson of Latin America. There are similarities in their warm, sultry tone, their bluesy feeling and strong command of the jazz language. Herrera is without a doubt the best jazz singer out of Mexico, and with México Azul she is establishing herself among the best singers in jazz." This is what jazz connaisseur and journalist Wilbert Sostre penned in his review about the album México Azul for the acclaimed music magazine Jazz Times.

Settled in Boston combines his work at Berklee College of Music Boston as Visiting Professor with the direction of his own record label "Casa Limón" with 15 records in the markets and the label production of international artists like Nynke Laverman from Holland, Amanda Martínez from Toronto and Aynur Dogan from Istambul.

Partner in the most important newspaper in Spain EL PAIS.com as blogger, he has worked many times with the Spanish National Television TVE as Musical director of the show TV "Entre dos Aguas" Broadcast in October 2011 and Recording for the program "Los oficios de la cultura" Broadcast in January 2011, also he has worked on the Spanish National Radio RNE "Asuntos Propios" once a week for 4 years. Since May 2013 he presents with Toni Garrido and David Trueba the show for TV and radio "A place called world" that shows on Canal Plus and Europa F.M.

Javier Limón's project, "Mujeres de Agua" (2010), is an honest tribute to the artist's talent in bringing together the top international performers in the Jazz Festival in Istanbul, Jazz Festival North Sea and the Premiere in Madrid's National Auditorium. As well as that, in his last Project "Promises of the Land" (2013), Javier gathers young musicians from Middle East to join Sephardic, Christian and Andalusian cultures, main basis of Flamenco and Andalusian Music.

On June 30th 2011 in New York City at the seventh annual Women Together Gala and Awards, Javier has received in the UNITED NATIONS an award for his invaluable disclosure of flamenco music.

With more than 60 musical productions in within we can highlight Lágrimas Negras, Buika , Enrique Morente, Paco de Lucía, Andrés Calamaro , Mariza , Anoushka Shankar, Joaquín Sabina or Joan Manuel Serrat and with seven Latin Grammy Awards, Javier Limón keeps on growing up in his exploration of Music. 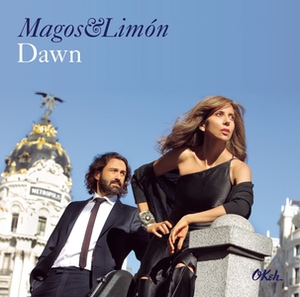 Every relationship is about the commingling of two unique sensibilities into one harmonious experience. Dawn is a musical romance, bringing together the passion and rhythmic drive of Flamenco with the sultry sophistication and alluring wit of Jazz. As the title implies, Dawn, marks a bold beginning for the partnership between the Mexican-born Jazz vocalist Magos Herrera and the young Spanish Flamenco innovator Javier Limón.