Magdalena Kozená is among the most renowned contemporary singers. That its position is supported by numerous domestic and international awards and an exclusive recording contract with Deutsche Grammophon Gesellschaft.

Singing studied first at the conservatory in his hometown of Brno and then with Eva Blahová at the Academy of Performing Arts in Bratislava. From their numerous domestic and foreign competition successes is the most absolute victory in the 6th International Competition W. A. ​​Mozart in Salzburg in 1995.

Her first album for Deutsche Grammophon with the Czech song's repertoire (Dvorak, Janacek and Martinu) won the 2001 prize Gramophone Solo Vocal Award. Other recordings include Mozart, Gluck and Mysliveček arias with the Prague Philharmonia and conductor Michel Swierczewski, French arias with the Mahler Chamber Orchestra under the direction of Marc Minkowski, Gluck's Paris and Helen Gabrieli Consort (artistic director Paul McCreesh), a recital with pianist Malcolm Martineau further recognized and critically acclaimed CD "Lamento 's cantatas by members of the Bach family (Musica Antiqua Koeln under the direction of Reinhard Goebel), CD with Mozart arias (Orchestra of the Age of Enlightenment with Sir Simon Rattle) and Handel project with the Venice Baroque Orchestra and Andrea Marconi. Newer recordings of the song CD titled "When my old mother" disc with arias by Vivaldi, CD "Letter Amorose" that Magdalena Leather recorded together with a set of Private Musicke in 2010 or Dvořák, Mahler and Ravel songs accompanied by the Berlin Philharmonic Orchestra conductor Sir Simon Ratllea on a CD called "Love and Longing". In the spring onto the market, the latest record, "Prayer", where Magdalena with the excellent German organist Christian Schmitt recite the sacred songs of Schubert, Bach, Maurice Ravel, Hugo Wolf and Antonin Dvorak. For his recordings won virtually all major singer's prizes, including the prestigious music magazine Gramophone Award for Artist of the Year 2004. Fragments recording of the opera Julietta Bohuslav Martinu in the title role with Magdalena Ko?ená, accompanied by the Czech Philharmonic under Sir Charles Mackerras, won in 2009 Gramophone Awards in the category Recital.

Operatic engagements include, among others, Magdalena leather. Oktavian role in Strauss's Der Rosenkavalier (Berlin Staatsoper Unter den Linden), Orpheus in Gluck's opera Orfeo ed Euridice, which she studied in Paris, Nera from the opera The Coronation of Poppea in Vienna; under Bernard Haitink and Marc Minkowski performed in Paris as Mélisande; It performed the same role also for the Deutsche Staatsoper under the direction of Sir Simon Rattle. Furthermore, she performed as Cherubino (Mozart: Le nozze di Figaro) at the festival in Aix-en-Provence, as Sesto (Handel: Julius Caesar) in the Dutch Opera and the Vienna Staatsoper, as Zerlina (Mozart: Don Giovanni) at the Salzburg Festival under the direction of Nikolaus Harnoncourt as Dorabella (Mozart: Così fan tutte), under the direction of Sir Simon Rattle and as Idamante (Mozart: Idomeneo). The Metropolitan Opera performed under the direction of Jiri Belohlavek as Varvara (Janáček: Katya Kabanova) and Mozart roles of Cherubino, Dorabella and Idamanta under the baton of James Levine. The Royal Opera House Covent Garden in the title role of Rossini's Cinderella in Salzburg and Berlin appeared as Bizet's Carmen.

In 2003 he became a Knight of the Ordre des Arts et Lettres by the French Republic.

Magdalena Leather is a tireless promoter of Czech music and Czech culture, became a patron of the International Music Festival of 13 cities Concentus, his name joined with the Year of Czech Music 2014 and also sponsored the IV. vintage pan-European music Czech Dreams project.

In 2013 Magdalena has received several prestigious art awards: Award took over the Foreign Affairs Minister Gratias Agit award for spreading the good name of the Czech Republic and the Gold Medal for merit in the field of art from the International Committee of Washington's Kennedy Center for the Arts. These two accolades complement respected GF Handel prize, awarded by the famous German composer's birthplace, the city of Halle, for outstanding interpretation of a work of his famous son.

In the season 2015/2016 will Magdalena as a residential artist in several European cities with a rich program; present in a song recital with pianist Mitsuko Uchida, within a chamber of the project with Sir Simon Rattle and the Berlin Philharmonic members in a series of concerts with renowned baroque ensemble La Cetra and also with Ondrej Havelka and his Melody Makers swing. This year's theatrical highlights of the Magdalena leather undoubtedly include the title role in Debussy's Pelléas et Mélisande, which Semi staged performs, directed by Peter Sellars, together with the Berlin Philharmonic and the London Symphony Orchestra and the opera by Bohuslav Martinu's Juliette, which scenically be staged at the Staatsoper in Berlin under the baton Daniel Barenboim and Rolando Villazón in the role of Michel. 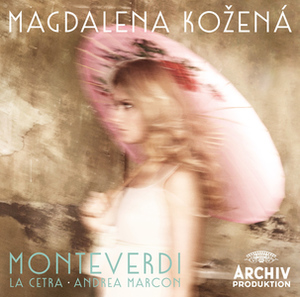 In 2000 Magdalena Kozená took over from an ailing colleague as Nero in the Vienna Festival production of L'incoronazione di Poppea, yet a deeper connection to Monteverdi and his music can be traced to a far earlier date, as the singer herself recalls: "I was sixteen when I met a lutenist with whom I formed an ensemble for Baroque and Renaissance music. It was a very important experience for me, for not only did I learn the Italian language through these pieces, but I discovered a great deal about the style of the music of this period and about the way in which it is ornamented."