Pianist and composer Ludovico Einaudi was born in Turin on November 23rd 1955. Perhaps it was his mother, an amateur pianist, who gave him the first impulse to music, planting the seeds for what would become a fruitful, illustrious career. He began to study music at the Conservatory of Turin and graduated with a diploma in composition under Azio Corghi at the Conservatory of Milan. Immediately he began post-graduate studies with Luciano Berio, with whom he worked as assistant, and later with Karlheinz Stockhausen. In 1982 his talents would win him a scholarship to the Tanglewood Music Festival, where he first came into contact with the American minimalism. He spent the next several years composing for the ballet, the cinema and the theater, including "Sul filo d'Orfeo" (1984), "Time out" (1988), "The Wild Man" (1991), and "Salgari" (1995), as well as many pieces for orchestra and ensemble, which were performed at La Scala of Milan, the Paris Ircam and the Lincoln Center in New York. With the album "Stanze" (1992), a collection of sixteen compositions for harpist Cecilia Chailly, he set off on "a journey towards essentiality, trying to achieve the maximum expressive intensity using the minimum indispensable". But it was with "Le Onde" (1996), his first solo album, inspired by Virginia Woolf's novel, that he captured piano world's attention, further enhanced by the following "Eden Roc" (1999), in which he played with a string quintet and duduk master Djavan Gasparyan, and "I giorni" (2001), a cycle of ballads for piano inspired by a trip into Mali. He returned to Africa two years later at the Festival au Desert. The new album "Diario Mali" with kora master Ballaké Sissoko blossomed from this experience. The score he wrote in 2002 for the remake of "Doctor Zhivago" triumphed at the New York Film Festival. The increasing prestige of his soundtracks would be confirmed by "Not of This World" (2000), "Light of My Eyes" (2001), "Strange Crime" (2004), "This is England", film (2004) and TV series (2010), "The Untouchables" (2011), "Samba" (2014), "The water diviner" (2015) and "The third murder" (2017). The live recorded performance at La Scala of Milan as well as the special concerts at the Hangar Bicocca and the Royal Albert Hall, marked the achievement of full artistic expression. The more concentrated, introspective and meditative was the studio album "Una mattina" (2004), the more expanded, challenging, sumptuous was the following "Divenire" with the Royal Liverpool Philharmonic. Both records, which were already topping the classical charts, crashed into the pop charts too for the first time. He was the only classical musician to play at the first iTunes festival. During the extended world tour that followed, he never stopped writing new music. In 2009 he released "Cloudland", with Robert and Ronald Lippok, and "Nightbook", a nocturnal, interior work that "projects the piano in every direction, like a shadow". The peak performance of his European and American tour was once again at the Royal Albert Hall, recorded live and released as a double CD and DVD. For two consecutive summers he conducted the Orchestra della Notte della Taranta, producing a visionary musical direction that left a mark in the "black land of the tarantola". In 2013 he released "In a time lapse", a reflection on time, recorded in a monastery and "conceived as a suite or as the chapters of a single novel", in which his piano was accompanied by strings, percussion and electronic tracks. The world tour that followed scored many remarkable performances, such as the Sidney Opera House, the Arena of Verona and the acclaimed "Piano Africain", for six pianos and six balafons and marimbas, which opened the Piano City Milano festival in 2014. The  album, "Elements", released in 2015, sprang "from the desire to start anew, following different paths to knowledge". Recorded over a span of three months in his home studio in the Langhe countryside, "while spring was exploding", the album became "a map of thoughts and feelings, points, lines, shapes and fragments of an ongoing interior flow through myth, Euclid, the periodic table and Kandinsky's writings." During the next three years, the "Elements" tour sold out either the world's premier pop arenas and the greatest classical theaters. In 2016 he performed his "Elegy for the Arctic", commissioned by Greenpeace, on a floating platform amidst the ice in the Arctic Ocean. The same year marked the debut of "Dieci Notti" at Teatro Dal Verme of Milano, which would become an annual concert series: ten consecutive days of performances, special guests and events, "to give back something to a city that has given me so much".

Seven Days Walking is the title of the new album by Ludovico Einaudi, set to be released on March 15, 2019, three and a half years after Elements and a triumphal world tour.

"I remember that in January 2018 I often went for long walks in the mountains, always following more or less the same trail. It snowed heavily, and my thoughts roamed free inside the storm, where all shapes, stripped bare by the cold, lost their contours and colors. Perhaps that feeling of extreme essence was the origin of this album."

Seven Days Walking is divided into seven episodes, seven albums (Day One, Day Two, etc. until Day Seven), which will be released at monthly intervals.

Each episode is focused on several main themes, which are recurring in different form: seven variations following the same imaginary itinerary. Or the same itinerary, retraced in seven different moments.

"The idea first came to me as I was listening to the recordings of the first sessions: each version seemed to me to have its own personality, with subtleties so distinct from one another that I was unable to choose which I preferred. I associated everything with walking, with the experience of following the same routes over and over, discovering new details each time. And so in the end I decided to thread them all together in a sort of musical labyrinth, a little like stepping inside the twists and turns of the creative process, to understand how a musical idea can develop in multiple directions, and changing once again at the moment in which it is heard." 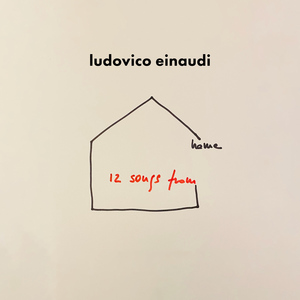 Ludovico Einaudi today releases a special 12-track digital collection, ‘12 Songs From Home', out digitally on Decca Records on 8thMay 2020 with artwork drawn by the composer. Recorded at home on his own upright piano in one evening during the lockdown, the release follows several live streams that were watched by thousands of people at a time on his Instagram page.

Einaudi explains, "I recorded ‘12 Songs From Home' between March and April 2020 during the peak of Italy's lockdown. In March I started to play live concerts regularly on social media. Switching on my phone to connect for 30-40 minutes with the world has been a beautiful and intimate alternative to the spring tour that I regrettably had to postpone. This new release is the memory of those home live concerts, my memory of this time, the memory of a strange and new atmosphere that we won't forget."