'The New York Times' has called Leif Ove Andsnes "a pianist of magisterial elegance, power and insight." With his commanding technique and searching interpretations, the celebrated Norwegian pianist has won worldwide acclaim, prompting the 'Wall Street Journal' to call him "one of the most gifted musicians of his generation." He gives recitals and plays concertos each season in the world's leading concert halls and with the foremost orchestras. Andsnes is also an active recording artist, as well as an avid chamber musician who has joined select colleagues each summer at Norway's Risør Festival of Chamber Music. He serves as Music Director of the 2012 Ojai Music Festival in California.

Beethoven figures prominently in Leif Ove Andsnes's 2012-13 season and beyond, in concerto performances, recitals and recordings. Having already performed Piano Concertos Nos. 1 and 3 extensively across Europe and North America with ensembles including the Norwegian Chamber Orchestra, the BBC, Vienna, Montreal and Boston Symphony Orchestras, the launch of this major project has brought Andsnes critical acclaim.  In November Sweden's Göteborg Posten wrote "This was a musical event of historic dimensions ... Fantastically well balanced, with ethereal precision and an explosive temperament which created a sleek and dangerous Beethoven".  In January, the Boston Globe commented "This excellent Norwegian pianist plays with a rare blend of fluidity and control, and his Beethoven last night grew more daring and boldly profiled as the work progressed, ending with a finale that was irresistible."

In Spring 2012, Leif Ove Andsnes resumed "The Beethoven Journey" on tour with the Mahler Chamber Orchestra. Together they capped a seven-city European tour with performances of Beethoven's Piano Concertos Nos. 1 and 3 at the Prague Spring Festival, which were recorded live by Sony Classical for Andsnes' label debut. In total, the project will see him perform and record all five of Beethoven's piano concertos as well as the Choral Fantasy in the Czech capital, directing the Mahler Chamber Orchestra from the keyboard. The journey will culminate in the 2014-15 season, when Andsnes and the ensemble will reunite for residencies in North America, Europe and Asia."The Beethoven Journey" is sponsored by the Stiftelsen Kristian Gerhard Jebsen, a Bergen based foundation established to honour the memory of Kristian Gerhard Jebsen and his contribution to the Norwegian and international shipping business.

This June Leif Ove Andsnes was guest Music Director at the Ojai Festival in California, where he created his own programme and invited close musical friends including the Norwegian Chamber Orchestra, Martin Fröst and Marc-André Hamelin. Closing the current season Andsnes takes to the road once more for a Summer Festival recital tour featuring Beethoven and Chopin before opening the new season with a return to Beethoven Piano Concertos and performances in New York, Los Angeles, Chicago, Munich, Berlin and London. He reunites with the Mahler Chamber Orchestra in November for a Beethoven tour encompassing Perugia, Cologne, Birmingham and Brussels.

Leif Ove Andsnes now records exclusively for Sony Classical. His previous discography comprises more than 30 discs for EMI Classics – solo, chamber and concerto releases, many of them bestsellers – spanning repertoire from Bach to the present day. He has been nominated for eight Grammys and awarded many international prizes, including five Gramophone Awards. His recordings of the music of his countryman, Edvard Grieg, have been especially celebrated: the New York Times named Andsnes's 2004 recording of the Piano Concerto with Mariss Jansons and the Berlin Philharmonic a "Best CD of the Year," and the Penguin Guide awarded it a coveted "Rosette." Like that Concerto recording, his disc of Grieg's Lyric Pieces won a Gramophone Award. His recording of Mozart's Piano Concertos 9 and 18 was another New York Times "Best of the Year" and Penguin Guide "Rosette" honoree. He won yet another Gramophone Award for Rachmaninov's Piano Concertos Nos. 1 and 2 with Antonio Pappano and the Berlin Philharmonic. This recording was followed in the Autumn of 2010 by the release of Rachmaninov's Piano Concertos Nos. 3 and 4 with Antonio Pappano and the London Symphony Orchestra which was nominated for two Grammy awards. Andsnes' last recording on EMI appeared in Spring 2011, featuring Schumann's complete Piano Trios with violinist Christian Tetzlaff and his sister, cellist Tonja Tetzlaff. The recording promptly won the award for Best Classical Recording by Spellemann Prize in Norway.

Leif Ove Andsnes has received Norway's most distinguished honor, Commander of the Royal Norwegian Order of St. Olav. In 2007, he received the prestigious Peer Gynt Prize, awarded by members of parliament to honor prominent Norwegians for their achievements in politics, sports and culture. Andsnes has also received the Royal Philharmonic Society's Instrumentalist Award and the Gilmore Artist Award. Saluting his many achievements, Vanity Fair named Andsnes one of the "Best of the Best" in 2005.

Andsnes was born in Karmøy, Norway in 1970, and studied at the Bergen Music Conservatory under the renowned Czech professor Jiří Hlinka. Over the past decade, he has also received invaluable advice from the Belgian piano teacher Jacques de Tiège, who like Hlinka, has greatly influenced his style and philosophy of playing. Andsnes cites Dinu Lipatti, Arturo Benedetti Michelangeli, Sviatoslav Richter, and Géza Anda among the pianists who have most inspired him. Andsnes currently lives in Copenhagen and Bergen, and also spends much time at his mountain home in Norway's western Hardanger area. He is a Professor at the Norwegian Academy of Music in Oslo and a member of the Royal Swedish Academy of Music. Andsnes occasionally contributes written commentaries to NPR's "Deceptive Cadence" blog, and in June 2010, he achieved one of his proudest accomplishments to date: he became a father for the first time. 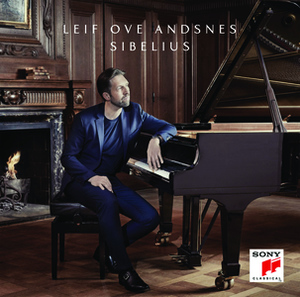 Leif Ove Andsnes will follow his string of award-winning Beethoven concerto recordings for Sony Classical with an album of solo piano works by Finnish composer Jean Sibelius. Sibelius wrote over 150 works for piano, but the composer's works for the instrument have long languished in the shadow of his orchestral music. His piano pieces were often seen as lacking in the rich, sonorous textures that the composer brought to his full orchestral works and were therefore largely disregarded. Andsnes has scoured the composer's entire piano output, carefully selecting the pieces he believes deserve recognition and with which he feels a strong personal connection, uncovering ‘intriguing works with the wonderful Sibelius qualities we know'.