One of the most individual of all altoists (and one of the few in the 1950s who did not sound like a cousin of Charlie Parker), the cool-toned Lee Konitz has always had a strong musical curiosity, leading him to consistently take chances and stretch himself, usually quite successfully. Early on he studied clarinet, switched to alto, and played with Jerry Wald. Konitz gained some attention for his solos with Claude Thornhill & His Orchestra (1947). He began studying with Lennie Tristano, who had a big influence on his conception and approach to improvising.

Birth of the CoolKonitz was with Miles Davis' Birth of the Cool Nonet during their one gig and their Capitol recordings (1948-1950) and recorded with Lennie Tristano's innovative sextet (1949), including the first two free improvisations ever documented. Konitz blended very well with Warne Marsh's tenor (their unisons on "Wow" are miraculous) and would have several reunions with both Tristano and Marsh through the years, but he was also interested in finding his own way; by the early '50s he started breaking away from the Tristano school. Konitz toured Scandinavia (1951), where his cool sound was influential, and he fit in surprisingly well with Stan Kenton & His Orchestra (1952-1954), being featured on many charts by Bill Holman and Bill Russo.

The Lee Konitz DuetsKonitz was primarily a leader from that point on. He almost retired from music in the early '60s but re-emerged a few years later. His recordings have ranged from cool bop to thoughtful free improvisations, and his Milestone set of Duets (1967) is a classic. In the '70s and '80s, Konitz increased his recorded output, issuing consistently stimulating sessions for such labels as SteepleChase, Philogy, Soul Note, and others.

I've been making music for as long as I can remember - it's always been my primary mode of expression. I grew up studying classical piano and obsessively improvising jazz at home. For most of my creative life, I've navigated the divide between these two worlds, though at this point my deepest roots lie in jazz and improvisation. I've been lucky to get to make music with some of the very best musicians in the jazz community, from Lee Konitz to Pharoah Sanders via Mark Turner and Paul Motian.

The truth, however, is that style has never felt all that important to me. I grew up bilingual, raised in France by an American family, which may explain why I've always been much more attached to content than to form, more concerned with what's being said than the language in which it's being expressed. As a result, I've grown increasingly drawn to exploring different means of expression for my music in order to further isolate the message from the medium. A sports analogy: if you always play tennis against the same person, you only get better at playing against that person. If you always play with different people, you get better at tennis. What I'm trying to do is clarify my message, independently of style. To get right at the music itself.

One of his generation's extraordinary talents, Dan Tepfer has made a name for himself as a pianist-composer of wide-ranging ambition, individuality and drive - "a remarkable musician" in the words of the Washington Post and one "who refuses to set himself limits" in those of France's T?l?rama. The New York City-based Tepfer, born in 1982 in Paris to American parents, has performed with some of the leading lights in jazz; as a leader, he has crafted a discography already striking for its breadth and depth, ranging from probing solo improvisation and intimate duets to trio albums rich in experimentation. Tepfer's acclaimed Sunnyside/Na?ve album Goldberg Variations / Variations saw the pianist performing J.S. Bach's masterpiece as well as improvising upon it to "build a bridge across centuries and genres" as the Wall Street Journal put it. New York magazine called the album "elegant, thoughtful and thrilling," while DownBeat declared it "one of the more audacious, accomplished recordings of the year." Bringing together his undergraduate studies in astrophysics with his passion for music, he is currently working on integrating computer-driven algorithms into his improvisational approach.

Tepfer's latest release is Eleven Cages, released on Sunnyside Records in June 2017. His first jazz trio album in seven years, Popmatters called it "Thrilling, fresh, and always smart". It ranges from deeply melodic originals and free pieces to interpretations of Gershwin's "I Loves You, Porgy" and Beyonc?'s "Single Ladies". Named "one of the very best essays in contemporary piano trio jazz you'll hear all year" by JazzWise UK, it finds Tepfer exploring freedom within boundaries and the malleability of time in a seemingly telepathic trio with bassist Thomas Morgan and drummer Nate Wood.

For his newest project, Acoustic Informatics, Tepfer returns to his background in science for an exploration of the intersection between algorithms and improvisation. Using Yamaha's Disklavier, an acoustic concert piano that can be controlled by computer, he has written programs that respond in real time to his improvisations, leading to an exceptional melding of man and machine. Simultaneously, algorithmic projections create a mesmerizing visual universe that reveals the underlying musical structure. National Public Radio (NPR)'s 2017 short documentary on this project, Fascinating Algorithm, has been viewed over 1.4 million times on Facebook.

His previous release was Small Constructions - an album of duets with multi-reed player and Kneebody co-founder Ben Wendel, released on Sunnyside Records in 2013. A set of songs without words, Small Constructions is a multi-tracked, multi-layered production featuring Tepfer and Wendel playing multiple instruments in multiple styles, extending from fresh versions of Monk tunes to pieces based on Handel and Messiaen motifs, from a standard given an artful makeover to originals that underscore the duo's melodic flair. In the words of the New York Times, it reveals "a wide-open sensibility, about as tuned in to Bach and Bj?rk as to Monk and Shorter."

Tepfer, whose mother was an opera singer and grandfather a jazz pianist, began classical piano studies at age 6 at the Paris Conservatoire-Paul Dukas. The young musician took a circuitous route to a jazz career, first earning a bachelor's degree in astrophysics from Scotland's University of Edinburgh. He played extensively on the jazz scene in college and even enjoyed a brief stint as an opera conductor. After graduating in 2005 from Boston's New England Conservatory, where he completed his masters under the guidance of Danilo Perez, Tepfer moved to New York and quickly became an in-demand player, performing with such innovators as Steve Lacy, Paul Motian, Bob Brookmeyer, Joe Lovano, Ralph Towner, Billy Hart and Mark Turner. Tepfer was introduced by Martial Solal, one of his mentors in France, to Lee Konitz. The veteran saxophone luminary and the young pianist hit it off at once, sparking a partnership that would yield duet performances on both sides of the Atlantic and the 2009 Sunnyside album Duos with Lee. Described as "a benchmark of human potential" by Jazz Inside, the Tepfer-Konitz album embodies the notion of jazz as an artistic exchange across the generations, comprising mostly freely improvised pieces. A new duo album, Decade, is slated for release in June 2018 on Impulse.

The Village Voice described Tepfer's Goldberg Variations / Variations this way: "In a ballsy move that resounds with an unabashed yen for balance, the insightful pianist concocts a freeprov ditty for each of Bach's most famous miniatures. On the classical side, the 60 tracks are a blend of grace and power. On the jazz side, they're built with daring and lan. It's easy to respect both." The prelude to Tepfer's Bachian explorations was his solo Twelve Free Improvisations in Twelve Keys (DIZ, 2009), an engaging, absorbing album rooted in some of his earliest musical explorations. Considering the contemplative reveries of this pianist, DownBeat said: "Tepfer has the ability to disappear into the music even as he's making it."

Tepfer's first two trio albums - Oxygen (DIZ, 2007) and Before the Storm (DIZ, 2005) - saw the pianist in league with bassist Jorge Roeder and drummer Richie Barshay, longtime confreres with close rapport. Allying high instrumental finish to tight arrangements, the albums ranged from Tepfer's irresistible, ever-lyrical originals to ingenious versions of John Coltrane's "Giant Steps" and Joe Henderson's "Inner Urge" - and Michael Jackson's "Billie Jean." It was such music-making that led Time Out London to say: "Tepfer is among the most accomplished and imaginative of the new wave of players emerging across the pond. He specializes in a rippling style that builds complex melodic layers of ideas... A piano star."

For his third trio album - Five Pedals Deep (Sunnyside, 2010) - Tepfer convened a new, galvanizing partnership with bassist Thomas Morgan and drummer Ted Poor. Whether on originals of great beauty by Tepfer (including some solo interludes) or covers of a Jacques Brel tune and "Body and Soul," it was the sound of surprise that the pianist was after with this album. According to The New York Times, Tepfer's Five Pedals Deep "lays out something like a personal manifesto? Mr. Tepfer unfurls his lyricism in great silvery arcs." All Music Guide described the album as "inventive" and "intense," while Stereophile simply judged it "beautiful." All About Jazz singled out Tepfer's tune "I Was Wonderin' " for its brand of playful sophistication, with "its hints of swing, rock, and even classical? there simply to service the nuanced shading of the piece."

Tepfer's playing - whether performing with Lee Konitz at the Village Vanguard or leading his trio at the Jazz Standard, going solo with his complete Goldberg Variations / Variations at New York's Le Poisson Rouge or playing in an all-star Bud Powell tribute at Birdland - is always a mix of the gorgeous and the vivacious, lyricism balanced with swing, freedom with cohesion. The New York Times has called him "a pianist of exceptional poise who is drawn to the deeper currents of melody."

All-around, Tepfer is "one of the moment's most adventurous and relevant musicians," according to New York magazine. He was voted a Best New Artist in JazzTimes in 2010 and a Rising Star in DownBeat in 2011, 2012 and 2013. Among his awards are the first prize and audience prize at the 2006 Montreux Jazz Festival Solo Piano Competition, first prize at the 2006 East Coast Jazz Festival Competition, and first prize at the 2007 competition of the American Pianists Association. He has been named a Cultural Envoy of the U.S. State Department, with travels to Azerbaijan, Georgia and the Czech Republic. He has also lectured and led master classes from London to Warsaw to Seoul.

As a composer, he is a recipient of the Charles Ives Fellowship from the American Academy of Arts and Letters for works including Concerto for Piano and Winds, premiered in the Prague Castle with himself on piano, and Solo Blues for Violin and Piano, premiered at Carnegie Hall. In 2016, he became a fellow of the MacDowell Colony, where he composed Solar Spiral, a three-movement piece for piano quintet commissioned by the Ravinia Festival. 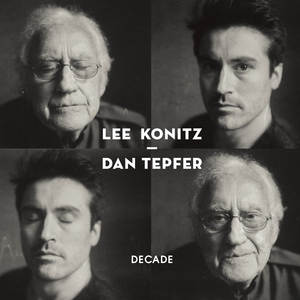 Having first performed together in 2007, acclaimed Jazz musicians Lee Konitz and Dan Tepfer join forces to release their Sophomore duo album,'Decade, on Verve Records. The album will be released digitally on 7/6 and is available for pre-order now. The duo will'play two NYC dates on July 26 and 27 at the Jazz Gallery, where they first performed together, in light of the album release.'

Decade'marks ten years since the duo's first and only release together in 2008, the critically acclaimed,'Duos with Lee, lending to its title. Having spent the intermittent years individually touring across North America, Europe, Asia and Australia both as a duo and in larger settings, Konitz and Tepfer have developed a deep complicity that is evident on the upcoming album.'