Blatt shares a little about his mode of playing to create his distinctive sound. "As a solo instrumentalist, I have to let my guitar be my voice. I try to create moods and express feelings by using alternate tunings, by careful attention to musical dynamics and intonation and by layering percussive sounds behind the main voice of the guitar. Sometimes playing a phase softer or louder can have a significant impact on what is communicated. In some cases, being a solo instrumentalist is difficult since I cannot use lyrics to directly express my thoughts and feelings. In another sense, this is highly cathartic as my music can communicate in any language and I can create new patterns of communication through sounds and rhythms."

Blatt performs in a variety of styles, "My music ranges from soft contemporary compositions to mysterious pieces that could be set in the 18th century."

Blatt's music unfolds in a variety of genres, including acoustic, adult contemporary, jazz flavors and occasionally fringes on alternative sounds. But ultimately, he just plays.

When speaking about his release "Longitudes and Latitudes," Blatt explained, " I became interested in the gridded map of the earth that was first proposed by the Ancient Greek Explorers.  I have been traveling around the globe for over a decade and I have been writing music that is inspired by different places and I like to link my impressions of the natural work to my musical compositions…"

Any discussion of Blatt's music must include mention of his instruments. When recording, Blatt can be heard playing two "very special guitars." One is a custom steel-string guitar crafted by Edward Dick. "This guitar has a spruce top and Indian rosewood back and sides. It's slightly bell-shaped body produces a warm deep sound. I waited almost eighteen months for this guitar to be completed and I worked very closely with Edward during the construction to build the guitar to my exact specifications." The other guitar is a small-bodied 12-fret parlor guitar made by Kathy Wingert. It was built with a German spruce top and Brazilian rosewood back and sides. "This tiny guitar packs a powerful punch and was the inspiration for the title track for my first solo CD "Out of the Woodwork."

This solo artist has been playing acoustic guitar for over 30 years. He is currently performing his original compositions for finger-style-guitar in the San Francisco Bay area. His music has been called heartwarming, soothing, and relaxing. His music consists of layers of guitar work decorated with luscious melodies and percussive moods. He often plays in open tunings with a single guitar used to create the rhythm, bass and lead melody all at once. His latest project is FLOW, an ensemble and album of the same name.

Lawrence's music is available at fine retailers and all major online music stores.

Out Of The Woodwork 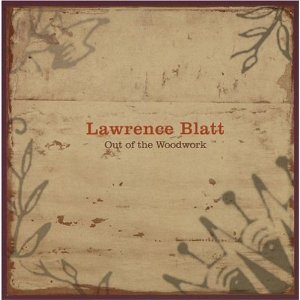 Guitarist and Composer Lawrence Blatt has been performing his finger-style-guitar compositions for over 30 years. His new release: Out Of the Woodwork is the culmination of that history in layers and organic part writing. With thirteen soothing guitar melodies, many of which are played in open tunings, the collection can be called 'acoustic solitude.' After spending years studying classical music as a violinist, Blatt's melodic yet intricate interaction of moods that lay beneath his alternate tunings are balanced by careful dynamics and intonation.

The Color of Sunshine

Out Of The Woodwork