Canadian-born violinist Lara St. John has been described as "something of a phenomenon" by The Strad and a "high-powered soloist" by the New York Times.

The Los Angeles Times wrote "Lara St. John happens to be a volcanic violinist with a huge, fabulous tone that pours out of her like molten lava. She has technique to burn and plays at a constant high heat."

Lara owns and runs her own label, Ancalagon, which she founded in 1999.  Bach: The Six Sonatas & Partitas for Violin Solo was the best-selling double album on iTunes in 2007.  Her 2008 world premiere recording of Matthew Hindson's Violin Concerto prompted Gramophone to write: "It's the sort of work that should get audiences running, not walking, back to concert halls on new-music nights."

In 2009, American Record Guide said of her Vivaldi/Piazzolla disc with the Simon Bolivar Youth Orchestra of Venezuela: "I can imagine no suaver, more atmospheric performance."  Her Mozart recording won a Juno Award in 2011.

In 2014, her Schubert album with Berlin Philharmonic harpist Marie-Pierre Langlamet, cellist Ludwig Quandt and soprano Anna Prohaska was chosen as one of ‘The Best CDs of Spring' by Der Tagsesspiegel and MDR Figaro recommended it for its "boundless enchantment."

Her 2016 release of re-imagined folk music with pianist Matt Herskowitz got a five-star review from All About Jazz: "Music like this is beyond imagination and talent. It exists only in the loosely-held molecules found on the razor's edge of Creation."

She has been featured in People, US News and World Report, on CNN's Showbiz Today, NPR's All Things Considered, CBC, BBC, a Bravo! Special: Live at the Rehearsal Hall and on the cover of Strings.

Lara began playing the violin when she was two years old. She made her first appearance as soloist with orchestra at age four, and her European debut with the Gulbenkian Orchestra when she was 10. She toured Spain, France, Portugal and Hungary at ages 12 and 13 and entered the Curtis Institute at 13. Her teachers have included Felix Galimir and Joey Corpus.

She performs on the 1779 "Salabue" Guadagnini.

His 2012 live solo release for Justin Time Records, Matt Herskowitz Upstairs, includes his arrangements of classics from Gershwin to Schumann to Dave Brubeck to originals by Herskowitz, including Bach à la Jazz, his arrangement of Bach's Prelude in C Minor which Herskowitz previously recorded for EMI's Grammy-nominated soundtrack to The Triplets of Belleville. In naming the release "Solo Album of the Year," Le Devoir declared: "Herskowitz deploys his art with a rare passion, but without ever sacrificing musicality. Exceptional technique, precise sense of nuance, Herskowitz here brilliantly fuses his mastery of jazz and classical." And Downbeat magazine praised Upstairs in its Editor's Picks: "Throughout these eight tracks, [Herskowitz] displays touch, power, artistry and chops along with a firm grasp of the daring needed for a great performance."

Upstairs follows-up Matt's critically-acclaimed, Juno-nominated world music fusion album Jerusalem Trilogy, also on Justin Time Records, which features the pianist's original compositions and arrangements in his signature synthesis of contemporary jazz and classical styles, combined with a unique blend of Arab and Jewish grooves. Among the album's fans was the late great Dave Brubeck, who commended Matt on the recording, saying: "Congratulations! You have transformed the concept of ‘world' music as I conceived of it half a century ago. You have carried it further than I could imagine."

Matt's 2015 release, Bach XXI (Avanti Classic), is an album of his original arrangements of selected pieces by JS Bach with his jazz trio and internationally acclaimed classical violinist Philippe Quint. One reviewer described it this way: "The album is a set of fascinating jazz settings of well-known Bach works, the kind of skilled re-imaginings that make me smile, however they might have nonplussed old Johann Sebastian himself." (Jon Sobel, Blogcritics)

Premieres of Matt's compositions include his 2012 Concerto Grosso with The Knights, an eclectic New York-based symphony orchestra, in Central Park on the Naumburg Orchestral Concerts series. The concert was broadcast live on WQXR and Matt was praised in The New York Times for his "imaginative, virtuosic solo." Matt premiered his piece "Undertow", a concerto for piano, electric bass, drums and orchestra loosely based on Bach's 3-part Invention no. 9 in F minor, at the Köln Philharmonie with Absolute Ensemble, conducted by Kristjan Järvi. The performance was filmed and broadcast on Germany's WDR television.

As an arranger, Matt has collaborated with many noted artists and producers. In addition to his hugely popular Bach à la Jazz, Matt and his trio were featured on Barry Manilow's album In The Swing of Christmas (Hallmark, 2007, Arista/Sony, 2009), which was nominated for a Grammy award fpr "Best Traditional Pop Album". Matt's 17-minute solo Piano Nocturne was featured on Lara Fabian's album Nue (Universal, 2001), earning him many new thousands of fans in Europe.

In addition to his other projects, Matt is also half of the Montreal-based piano duo, Piano Chameleons. With acclaimed jazz pianist John Roney, the duo creates unique jazz arrangements of popular classical pieces. Their victims include Bach, Rachmaninoff, Chopin, Schumann, Debussy, Grieg, Brubeck and Gershwin. Their debut album was released in October 2016 on Justin Time Records, and has received many rave reviews.

Matt also records and performs with renowned Canadian violinist Lara St. John. Matt invited her to perform on his 2010 album, Jerusalem Trilogy. The title track is a 3-movement piece that combines complex Arabic rhythms and grooves with soulful Jewish melodic writing in classical and jazz forms. Lara is perhaps the only violinist capable of seamlessly navigating through the stylistic hybrid and complex map of polyrhythms and compound meters to beautifully tell the story of the music. Lara then invited Matt to play on Shiksa, her album of original compositions and arrangements based on traditional eastern European folk songs. She also commissioned Matt to compose a piece for this album, Nagilara, based on the famous Jewish folk song Hava Nagila. The album has received many rave reviews since its release in 2015.

A graduate of the Juilliard School in New York and the Curtis Institute of Music in Philadelphia, Matt is originally from Rensselaerville, New York, and has made Montreal his adopted home since 1999. 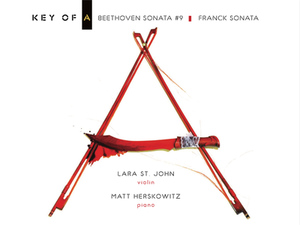 Violinist Lara St. John will release her new album Key of A with pianist Matt Herskowitz on April 17, 2020. The album pairs Beethoven's Violin Sonata No. 9, "Kreutzer" in A Major with Cesar Franck's Sonata in A Major for Violin and Piano, and also includes Fritz Kreisler's Schön Rosmarin.

Says Lara St. John about the program: "I'm a bit of a strange violinist, and when I was a kid, supposed to be learning all these normal works that folks do, instead I was learning Bartok solo sonata and Debussy, and Beethoven Concerto and 10th Sonata, and I just sort of missed some of these more ‘normal' pieces. I learned both of these sonatas rather late in life - in my late 20s. When I first asked Matt to do the Franck, which we have been playing together now for many years, I had performed it once or twice before, but had never been entirely free of normal pianists' ideas of 'tradition', which I found hobbling and somewhat nonsensical. As for the Beethoven 9 (Kreutzer), I had been waiting for a pianist who would be able to keep up with the extremes I envisioned for this piece, tempo and volume-wise. Obviously, old Ludwig wanted the pianist to improvise, which is what Matt does in the piano cadenzas."